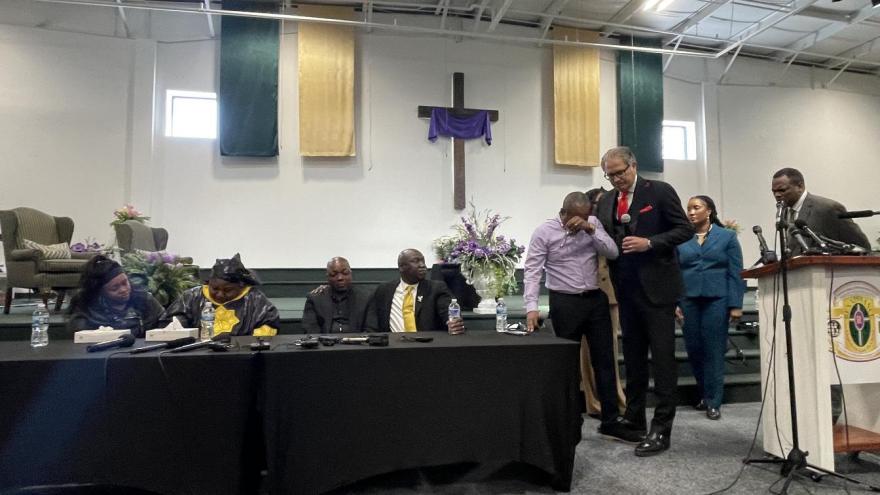 Civil rights attorney Benjamin Crump on Thursday holds a press conference alongside the Lyoya family at the Renaissance Church of God in Christ Family Life Center in Grand Rapids, MI.

(CNN) -- The family of a Michigan man who was shot and killed by a police officer earlier this month during a traffic stop reiterated their call for the termination and prosecution of the officer during a news conference on Thursday.

"They will express to you how very devastated they are at seeing, in their words, their son executed," said civil rights attorney Ben Crump during a news conference Thursday. Crump is representing the family of Patrick Lyoya, an unarmed Black man, who was fatally shot in Grand Rapids on April 4.

Crump and the Lyoya family were joined by attorneys, religious and community leaders at a city church for a "community conversation" about civil rights and police violence.

Lyoya's parents, Dorcas and Peter, and his brother Thomas wept at the community forum calling for the prosecution of the officer involved in the incident and demanded justice for the 26-year-old.

The Lyoya family moved from the Democratic Republic of Congo to the United States in 2014. Patrick's father said he thought he'd be safe during police encounters in the US.

"What is making me cry more is to see my son killed by a police officer for a small, small mistake," Peter Lyoya said through an interpreter. "My life has come to an end."

"When we run away from war in the [Democratic Republic of the Congo], I thought that I came to a safe land. And now, I'm surprised and astonished to see that my son is shot here," Dorcas Lyoya said through an interpreter. "That is my beloved son, and you know how you love your first-born son."

The incident began just after 8 a.m. CT on April 4, when a police officer pulled over a vehicle for improper registration, authorities said.

As CNN reported yesterday, Grand Rapids police released several forms of video footage capturing the approximately two minute and 40 second interaction, which begins with the officer walking toward the car. Lyoya is seen exiting the vehicle and is instructed by the officer to get back in the car and asks him if he has a driver's license and whether he speaks English, the video shows.

Lyoya confirms he speaks English and says his license is in the car. He opens the driver's side front door and speaks to an unidentified passenger in the car. He then shuts his door, turns his back to the officer and appears to walk toward the front of the car, according to video footage.

"No, no, no, stop, stop," the officer is heard saying. He then puts his hands on Lyoya's shoulder and back. Lyoya is seen resisting the officer's touch and quickly backs away from the officer, running away from him before the officer tackles him to the ground and tells Lyoya to "stop resisting."

The video shows Lyoya getting up and standing, the officer drawing and then deploying a Taser.

Grand Rapids Police Chief Eric Winstrom told reporters during a news conference that the Taser was deployed twice during the confrontation but the prongs didn't hit Lyoya.

"Let go of the Taser," the officer is heard saying on his body cam video.

At this point, the officer's body worn camera was deactivated. Winstrom said it takes pushing a button for three seconds to turn off the body camera and he thought pressure from Lyoya's body caused the deactivation.

Another angle of the incident, taken from a neighborhood home surveillance camera, captures the rest of the altercation. The officer is heard shooting Lyoya, according to audio from the video. The cell phone video also shows the fatal shot.

Lyoya was shot in the head, Winstrom said.

Patrick's father described his son as "non-violent" and said he felt the officer was the one being aggressive. He also said during the event that he has the right to know the name of the person who killed his son and what his history is.

Winstrom said on Wednesday that the officer involved in the shooting will not be identified publicly unless there are criminal charges. The officer, who has been with the department for seven years, is on paid leave and his police powers were suspended, Winstrom said. Michigan State Police are conducting a criminal investigation.

"This video was very difficult to watch, because what you see in that video is an unnecessary and unjustifiable excessive use of force," Crump said Thursday. Crump has represented the families of Breonna Taylor, George Floyd and Michael Brown and other high-profile victims of police violence.

During the news conference, Crump outlined different actions the officer could have taken to deescalate the situation instead of deploying his weapon.

"This officer failed to follow the basic training. When the officer engages Patrick he goes and puts his hands on him, and when Patrick goes to walk away he could've just stepped back and called for backup," Crump said. "When you look at him escalating the situation, [the officer] was the one being violent."

Crump said despite the officer's violence, Lyoya did not retaliate and have "combat" with this officer.

"Even after he deployed the Taser twice, if he had been following his training, that would've presented to him again another opportunity to deescalate and call for backup," Crump said. "What was so wrong about him calling for backup? It wasn't like Patrick had murdered someone. It wasn't like he had robbed anybody. He was being stopped for a traffic violation."

Crump said there's nothing in the body and surveillance footage that indicated Patrick was an immediate danger to the officer.

Crump said he and the Lyoya family have asked the state's attorney to prosecute the officer to the fullest extent of the law.

Tamika Palmer, the mother of Breonna Taylor, was also present during the event and called for the officer involved in the shooting to be "arrested, convicted and prosecuted." Taylor was fatally shot by Louisville police officers executing a no-knock warrant at her apartment in March 2020.

In calling for police reform on the federal level, Crump said: "We can't afford not one more day to pass, because as Tamika Palmer said, 'how many more of our children have to die before we change the laws and change the policy here in the United States of America?'"

There have been multiple protests and rallies on behalf of Lyoya. On Tuesday evening, dozens of people called for justice as they rallied outside a City Commission meeting.