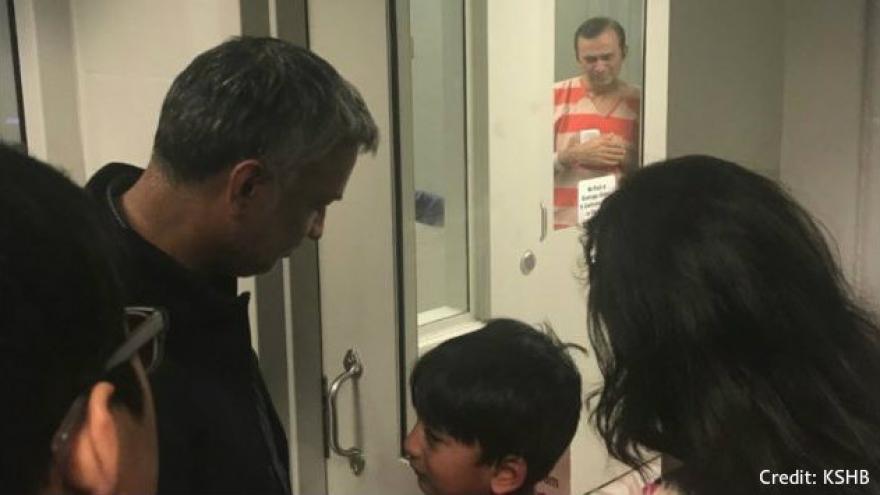 PLATTE CITY, Mo. (KSHB) -- The family of a Lawrence professor facing deportation saw him on Sunday for the first time since his arrest last month.

Syed Jamal's wife, children and brother visited him at the Platte County Jail.

Despite hopes to talk with Jamal, his lawyer says the family only saw him through a window.

In a Facebook post, Rekha Sharma-Crawford wrote the family did not know they had to arrive 30 minutes prior to the scheduled meeting time. The post reads, "While they were thankful for the visual, the disappointment of being that close with no verbal or physical contact was heartbreaking."

"It's really sort of...dehumanizing when you do this to someone," 14-year-old Taseen, Jamal's oldest son, said.

Jamal's attorney is asking immigration officials to release the husband and father of three while his case moves through the courts.

"For the life of me, I can't figure out what they're doing by holding him, what the purpose is. It's just a waste of government money, taxpayers' money," Syed Hussain Jamal said of his brother's detention.

Inmates at the Platte County Jail for civil offenses can only receive visitors one day a week for 30 minutes, while those held for criminal offenses can do so several times throughout the week.

That means Jamal's children won't have a chance to see their dad again until next Sunday.

"He wants to hug us and talk to us in person, but he can't do that," Naheen Jamal said of her dad.

Agents with Immigration and Customs Enforcement, commonly called ICE, arrested Jamal outside his home on January 24.

The deportation order leading to this legal fight, came after Jamal overstayed a visa in 2011.

According to his attorney, Syed Jamal legally came to the U.S. from Bangladesh 30 years ago.

Since his arrest, the adjunct professor at Park University has been through a legal fight to stay in the United States.

After a judge issued a stay of removal, late last week, Jamal returned to the Kansas City area after agents were in the process of deporting him.