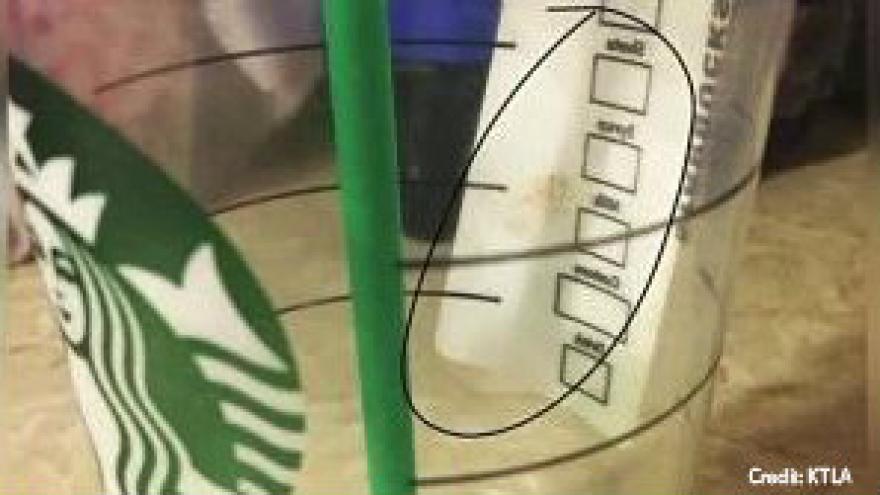 Amanda Vice, her husband Louis Vice and his mother Rhonda Agles ordered several beverages from the coffee shop at 601 W. 2nd Street in San Bernardino on Feb. 6, 2016. When they returned home, they noticed a red smear on the side of one of the cups and the drink had a "strong metallic smell,” according to the 19-page lawsuit provided by the Frish Law Group, a Los Angeles-based firm representing the family.

Another cup, which was being shared by a family member and the young girl, had the same red stain.

Amanda Vice said she couldn’t see anything from one of the cups at first.

"Once we drank it, then we could see on the inside of the rim that there was blood," she said, adding that her daughter was licking the lid, and eating whipped cream from the cup.

The family determined that none of them had been bleeding, then called the Starbucks to report the incident. They discovered that an employee had been bleeding and had been removed from the floor, the complaint states.

“My wife and my baby just drank someone’s blood,” Louis Vice said. “It was bad.”

“The family was then left to schedule their own blood tests, causing extreme distress for the parents as they had to watch their daughter be poked with a needle and agonizingly wait for the results,” a news release from the law firm reads.

Blood tests came back negative for any disease, the news release said, but the family had to be retested six months later to make sure.

“This caused the family stress, nervousness, fright, anguish, grief, anxiety, worry and shock for several months while awaiting the second round of test results” officials said in the news release.

"We felt sick to our stomachs, we shouldn’t have to worry about going to get something to drink and there being blood in our drink where we could get sick," Amanda Vice said. "It’s very stressful."

Starbucks offered $1,000 to each family member after the incident, but their attorney, Stan Pekler, said it “does not begin to compensate the family for suffered injuries and damages for which Starbucks is liable.”

“They endured additional distress because Starbucks seemed to not care about their wellbeing and refused to direct the employee to undergo a blood test to ensure the family's safety,” Pekler said.

The lawsuit against Starbucks Coffee Company seeks damages because of a failure to warn the family, negligence, breach of express warranty, breach of implied warranty, fraud, intentional infliction of emotional distress, battery, assault, negligent hiring, and negligent training and supervision.

Starbucks representative told KTLA that they are aware of the claim and are prepared to present their case in court.