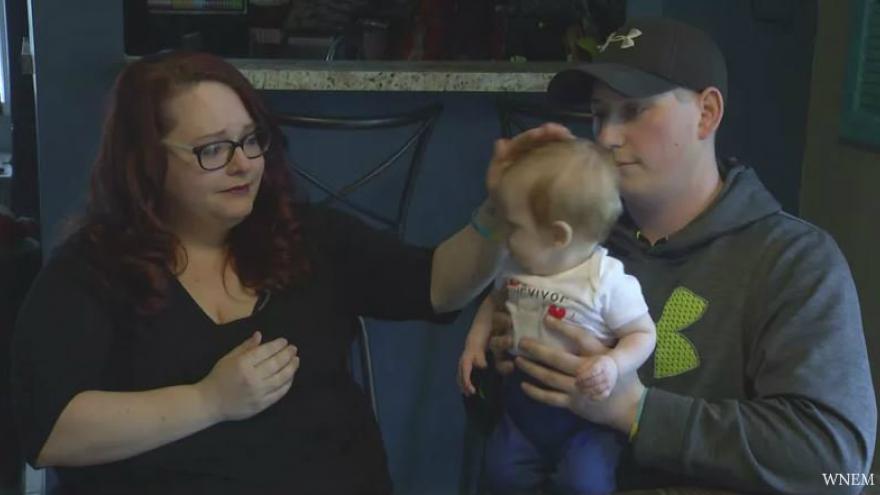 EAST TAWAS, Mich. (WNEM) -- Finding out you’re expecting a child can be an amazing experience for any couple, but for one East Tawas family that joy quickly turned to worry.

Before he was even born they learned their baby had been diagnosed with a potentially life-threatening condition.

“We were surprised. We didn’t expect a third, but the lord had different plans for us and we were equally excited,” said Nicole Markey, mom.

That’s how she and her husband Alex reacted when they found out baby number three was on the way. The baby was a boy who they would later name Lincoln.

The family received an alarming diagnosis 34 weeks into the pregnancy.

“Congenital diaphragmatic hernia, also known as CDH, it’s a diagnosis or birth defect where his diaphragm doesn’t fully form. So, that allows everything that should be forming in the stomach area is actually going up in the chest,” Nicole said.

Little is known about why the birth defect occurs, but it often leads to other complications.

When Lincoln was born he developed pulmonary hypoplasia and was put on a ECMO machine at just 4-hours-old. His chances of surviving were 5 percent.

“It was hard to hear. I guess it was just super hard to constantly keep hearing that they didn’t think he was gonna survive,” Nicole said.

He spent three long months at Mott Children’s Hospital clinging to life, hooked up to machines and tubes to help his tiny body function.

Nicole said those were the hardest months she has ever experienced. But there was one thing that made them just a bit easier.

“We got a few care packages when we were staying at Ronald McDonald in Ann Arbor. It was a breath of fresh air because you were used to going to the hospital and hearing all the medical terminology, what’s going on with him and to come back and have mail in your little mailbox at the Ronald McDonald House was just amazing,” she said.

Now the family wants to give back by making their own care packages to send out.

“We’ve been collecting anything from lotion to books," Nicole said.

Any help they can get would go a long way.

“It would mean a lot. That not only would they be donating to a good cause, they’d be helping bring awareness to CDH, which is something we didn’t even know what it was when he was diagnosed. We had no idea that three little letters could completely change our life,” Nicole said.

The family said Lincoln’s hospital stay was $1.3 million and their insurance is only covering about 10 percent of that.