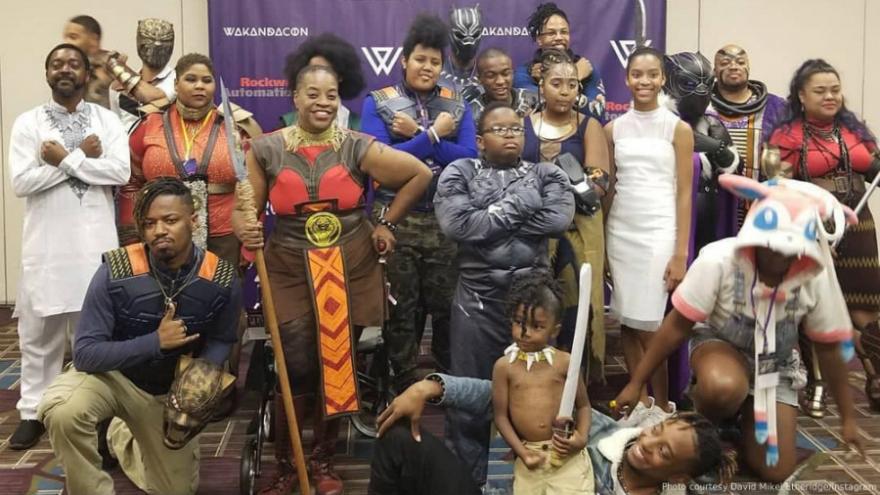 (CNN) -- A Chicago hotel was transformed over the weekend into the mythical African nation of Wakanda.

About 2,000 people attended the first-ever WakandaCon, which came together less than six months after King T'Challa's clash with Erik Killmonger in the big screen hit "Black Panther."

WakandaCon co-creator Ali Barthwell said she started planning the convention in March along with her brothers and two friends.

The event featured a costume parade, art demonstrations and celebrity panels you would expect to see at a fan convention, but it also had sessions on social activism, the water crisis in Flint, Michigan, entrepreneurship and gender and racial equality in STEM fields.

"[Wakanda is] a place free from racism, sexism and homophobia it's a place of advanced technology," Barthwell said. "We wanted to talk about the film, but we also wanted to answer the bigger question 'How can we make a place like Wakanda real?'"

All of the panelists were African-American -- about half were women -- and many of the vendors were local small businesses, who had never worked at a convention before.

Barthwell said they wanted to make it a community event that was welcoming for fans of color.

"We had a lot of people who were cosplaying for the first time and kids wanting to dress up and it was really great," she said.

Chicago math teacher David Mikel Etheridge had a different Killmonger costume for every day of the event. He's a big comic book fan, but said this is the first time he's been to a full convention.

"I went as him for all three days because I wanted to stick with the Wakanda theme," Etheridge said. "I am also a fan of the character and I think he is one of the best villains in the Marvel Cinematic Universe."

Etheridge wore a version of the costume to the "Black Panther" premiere in February and has been working on them ever since. He'd never been in a costume contest before and was excited to come in 2nd place.

He said it was great to see that five people were able to put the event together on their own and hopes they do it again next year.

Barthwell said they are still taking care of the final details from this year and will start thinking about the future soon.

She said WakandaCon was a tribute to the "Black Panther" film and that they did not have any contact or affiliation with Marvel or Disney.

"We're doing this all out of love," she said.