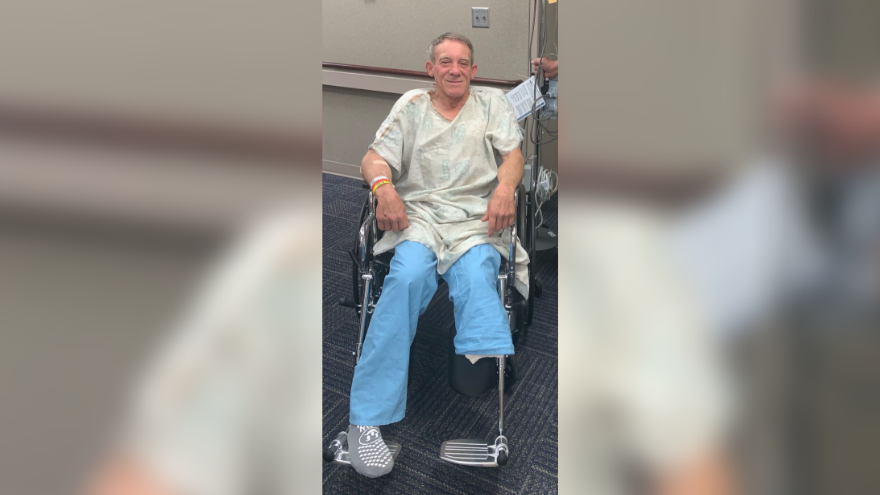 Kaser plans to get back to farming after his leg heals. Source: Amanda Kaser-Malousek
By Andrea Diaz, CNN

(CNN) -- A farmer in Nebraska was just trying to transfer some corn from one place to another when he accidentally stepped into a hole, the hole happened to be a grain auger.

Kurtis Kaser, 63, knew he had to act quick as his leg was getting pulled into the machine.

"I didn't know what to do and I didn't know how long I would keep my consciousness either, I about gave up but then I remembered I had my pocket knife," Kaser told CNN.

Kaser was at the farm by himself in Pender, located near the Iowa border, about three and a half weeks ago, when he had to make the split decision to cut off his leg.

"I didn't have a phone on me, I didn't know where it had gone, so I just started cutting with the knife," he said. "I knew I was done cutting because I felt a funny feeling, maybe it was a tendon I cut."

The farmer said shortly after, he proceeded to crawl towards his house using his elbows so he could reach a phone to call for help.

"I stopped for a little bit but I didn't want to stop for long in case I passed out, there was no way for me to get help, everyone was gone at the time, I just did what I had to do and they (first responders) got me in a helicopter," he said.

He was rushed to Bryan Medical Center and stayed there for about a week before transferring to Madonna Rehabilitation Center, where he underwent physical therapy.

"I was 45 minutes away from home when this happened, they were flying him away as I was arriving and I didn't get to see how he was doing before that," his wife, Lori, told CNN. "I am just glad he's here with us."

This isn't the first time Kaser has had a scare like this on the farm.

"These accidents happen all the time, when I was a sixth grader my other leg got stuck in a tractor, only my skin suffered that time," he said. "We're kind of used to this around here."

Kaser said he doesn't remember how long the whole ordeal lasted but when he returned home from the rehabilitation hospital on Friday, he was shocked to realize how far he had crawled.

"Everyone asks me why I am so calm about the situation and the truth is, when I was in Madonna (the rehabilitation hospital), I saw so many people who will probably never be able to walk again and I know I will be able to walk mildly normal, I'm fortunate."

His wife said they are now adjusting to the new lifestyle and within time they know everything will be back to normal. Once his leg is finished healing, he'll be fitted for a prosthetic and Kaser told CNN affiliate KETV that he'll be back to farming in no time.