Farmers get impatient with Trump's trade war: 'This can't go on' 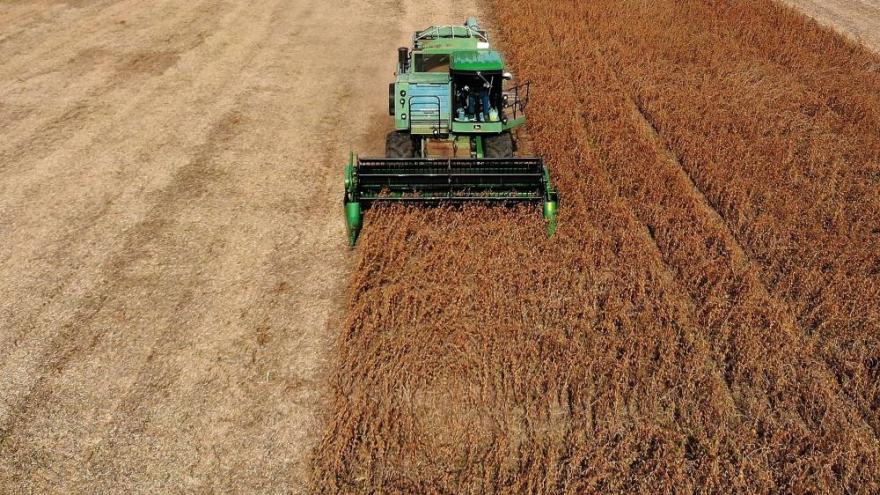 American farmers are running out of patience with President Donald Trump's trade war with China.

(CNN) -- American farmers are running out of patience with President Donald Trump's trade war with China.

Farmers have long stood behind Trump's mission to get a better trade deal with Beijing that addresses long-standing issues with what they say are unfair trading practices.

But after weeks of optimistic statements by Trump and members of his administration about how trade talks were progressing, Trump abruptly escalated tariffs on $200 billion of Chinese goods last week and opened the door to even more -- prompting Beijing to hit back Monday by raising the tariff rate on $60 billion of US items.

"The President of the United States owes farmers like myself some type of plan of action," John Wesley Boyd Jr., a soybean farmer in Baskerville, Virginia, told CNN's Brianna Keilar on Monday.

"Farmers were his base. They helped elect this president ... and now he's turning his back on America's farmers when we need him the most," he added.

Soybean, corn, and wheat growers have been battling tariffs from China for nearly a year now. Beijing imposed those duties in retaliation to tariffs put on Chinese products by the Trump administration.

The tariffs made those American agricultural products more expensive for Chinese importers, and private buyers have mostly stopped buying American-grown soybeans or wheat.

But Trump has sounded positive about progress toward a deal that would lift those tariffs since meeting with Chinese President Xi Jinping in December, and farmers took Trump's reassurances seriously.

John Heisdorffer, an Iowa farmer and chairman of the American Soybean Association, decided to plant about the same amount of corn and soybean this year, figuring a trade deal was near.

"We kept hearing that talks were going well, it sure looked like this was all going to be taken care of soon," he said. Now, he added, "there's a lot of uncertainty and a lot of emotions right now for farmers."

In the Midwest, they're also battling wet and cold weather that delays their planting season -- and could result in a lower yield for the year. Grant Kimberley in Iowa is still putting his corn crop in the ground, which he usually finishes planting by May 10. He hasn't started planting his soybeans yet.

"This can't go on for an extended period of time. We need a trade deal done soon, and in the meantime farmers are probably going to need another round of aid payments," said Kimberley, who is also the director of market development at the Iowa Soybean Association.

Trump offered aid payments last year to farmers hurt by retaliatory tariffs, worth about $12 billion. It softened the blow, but Kimberley says they'll need more if commodity prices remain low. A recent report from the US Department of Agriculture said the amount of soybeans in storage is up 29% compared to the same time last year.

Speaking to reporters Monday, Trump said he would use some of the tariff revenue -- which is paid by US importers -- to help subsidize farmers.

Trump's tariffs on foreign steel and aluminum have prompted other countries, including allies like Canada and Mexico, to put tariffs on US agricultural products, too. Those duties are also slowing down adoption of the US-Mexico-Canada Agreement, known as USMCA, which farmers support.

Late last year, Beijing pledged to restart buying American soybeans as part of the negotiations. But purchases made so far haven't made up for the loss last year. China was by far the biggest export market for US soybean growers.

The trade tensions are weighing on farmers, making it difficult to plan for the future. In an April survey conducted by Purdue University and the CME Group, only 22% of farmers stated it was a "good time" to make large farm investments.

On Friday, the leading wheat, soybean and corn grower industry groups put out a joint statement expressing their opposition to Trump's move to escalate tariffs. The three commodities represent about 171 million acre of farmland in the United States.

"Farmers have been patient and willing to let negotiations play out, but with each passing day, patience is wearing thin," said National Corn Growers Association President Lynn Chrisp in the statement. "Agriculture needs certainty, not more tariffs."