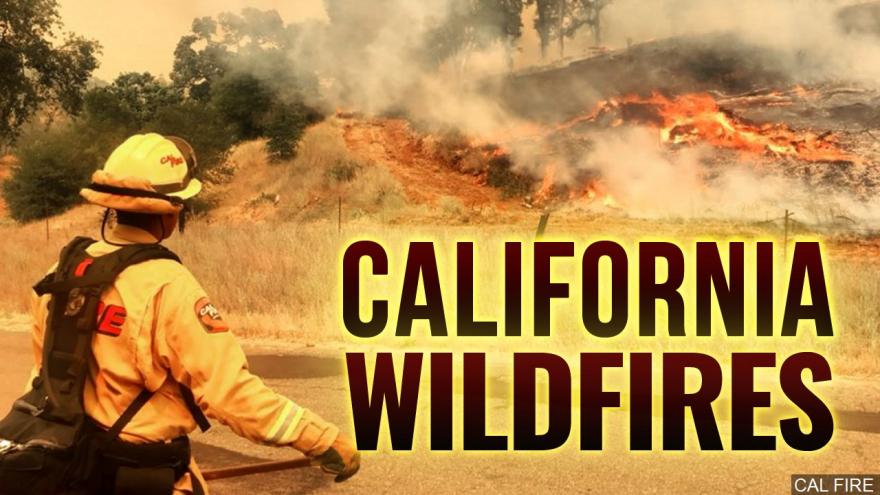 (CNN) -- Several wildfires are scorching the western United States and forcing hundreds to evacuate from their homes, with one person killed in a blaze near California's border with Oregon.

Details on the fatality were not released Friday pending notification of next-of-kin, but the victim was found in a structure in Hornbrook, according to Sheriff Jon Lopey of Siskiyou County.

The Klamathon Fire had grown to 21,800 acres by Saturday morning, according to the California Department of Forestry and Fire Protection, known as Cal Fire. It's just one of about 10 fires raging across the state, fueled by rising temperatures and gusty winds.

The blaze, which started Thursday and is spreading fast, is only 5% contained, according to fire officials. About 750 people have been evacuated.

In a Friday afternoon press conference, Lopey said the fire had destroyed 40 structures. But Cal Fire said Saturday morning that the Klamathon Fire had only destroyed 15 structures.

Meanwhile, in Santa Barbara County, firefighters were battling a new "fast-moving and wind-driven" blaze, known as the Holiday Fire. It scorched about 50 acres and prompted the evacuation of about 2,500 people in Goleta, county officials said.

The fire prompted Gov. Jerry Brown to declare a state of emergency in the county on Saturday.

Firefighters have been working in tough conditions, enduring triple-digit temperatures and strong winds that have increased the fire threat. On Friday, many record high temperatures were broken in cities across California. The mercury hit 114 degrees at the Burbank Airport and 117 degrees in Van Nuys Airport, the National Weather Service's Los Angeles office said.

The largest fire burning in the state is known as the County Fire, and has scorched more than 88,000 acres in Napa and Yolo counties. The blaze was 48% contained by Saturday morning, but had already burned 10 structures, according to Cal Fire.

Another California blaze, the West Fire, also caused Gov. Brown to declare a state of emergency in San Diego County, saying people and property are under "extreme peril."

The 400-acre brush fire is swallowing up homes in the densely populated suburb of Alpine. It had destroyed 18 structures and damaged eight others by Saturday morning. But firefighters were making progress, officials said, and containment had risen to 30%. Evacuation orders for hundreds of people living and working in the vicinity remained in place.

Scott McLean, deputy chief of Cal Fire, told CNN that residents need to be ready to leave at a moment's notice.

"They need to be prepared. They need to take that responsibility on to have their go kits ready to go," McLean said. "They have to know how to get out of their community or away from their home if a wildfire does strike."

The state fires are among 60 large blazes burning in 13 states, according to the National Interagency Fire Center.