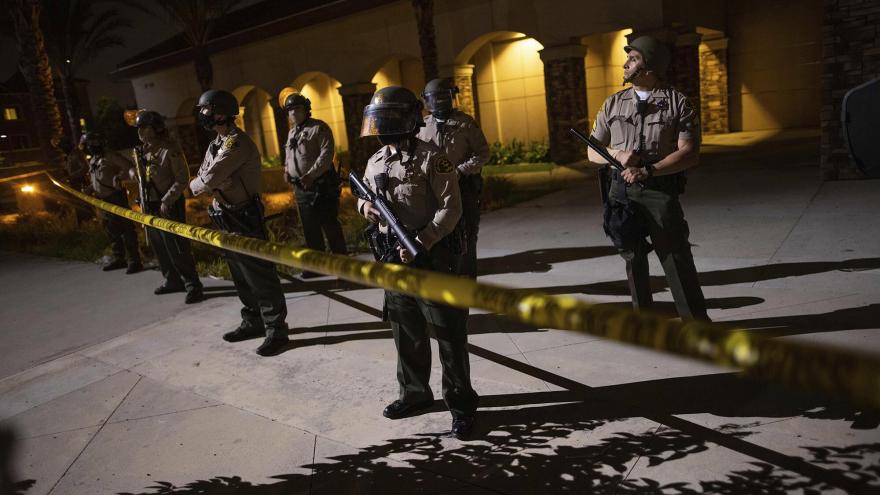 Deputies with the Los Angeles Sheriff's Department stand in formation during protests following a police shooting on Aug. 31, 2020

The sheriff's department says that at about 3:15 p.m. local time two deputies tried to stop a Black man riding a bicycle "in violation of vehicle codes," but when they approached him, he got off the bicycle and ran.

Sheriff's Lt. Brandon Dean told reporters that deputies caught up to the suspect about a block away, and when they approached him, the man punched one of the deputies in the face and dropped items of clothing he had been carrying.

Deputies "noticed that inside the clothing items he dropped was a black semiautomatic handgun," and that's when both deputies opened fire, shooting the man "several" times, Dean said. Investigators recovered a handgun from the scene.

The man was later pronounced dead at the scene. Police did not identify the man, who was only described as being about 30 years old. Neither of the deputies were injured, Dean said.

The man's death comes amid public protests over the August 23 police shooting of Jacob Blake in Kenosha, Wisconsin, and the May death of George Floyd in Minneapolis after an officer knelt on his neck.

Dean said the deputies have yet to be interviewed and were not wearing body cameras; investigators are combing the area for any surveillance video or home security footage and are calling on any witnesses with cell phone video to come forward.

The District Attorney's office and Office of the Inspector General are assisting in the investigation.

Following the shooting, activist group Black Lives Matter L.A. tweeted a call for protesters to gather in the area. CNN affiliate KCBS/KCAL estimated as many as 100 demonstrators were at the scene Monday evening, chanting demands for justice.

"How many more times do we have to gather out here, mourning the loss of our brothers and sisters," one protester told KCBS/KCAL.