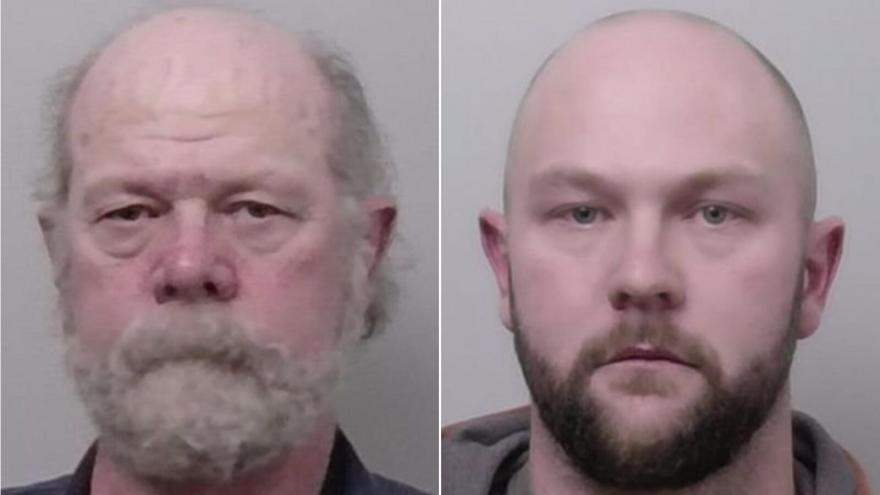 David Scott Smith (left) and Travis Shane Smith have been arrested and accused of starting the Caldor Fire that burned more than 200,000 acres in California earlier this year, according to authorities.

(CNN) -- A father and son have been arrested and accused of starting the Caldor Fire that burned more than 200,000 acres in California earlier this year, according to authorities.

The suspects, David Scott Smith, 66, and Travis Shane Smith, 32, are accused of "reckless arson" which "caused inhabited properties to burn and resulted in great bodily injury to multiple victims," the El Dorado County District Attorney's office said in a statement.

Criminal charges against the two have not yet been filed, and the district attorney did not elaborate on how the fire was started.

The Caldor Fire scorched El Dorado and Amador Counties near Sacramento in August and September, and mandatory evacuations were issued for parts of California and Nevada.

Severe drought conditions exacerbated the wildfire -- which grew to nearly 100,000 acres in size in its first week -- and others in the region. At one point in early September, nearly 15,000 personnel were on the frontlines working to contain 13 active large wildfires, according to state agency Cal Fire.

The Caldor Fire threatened the popular tourist spot of Lake Tahoe, where firefighters managed to slow and eventually halt the spread of the flames. The fire was fully contained after approximately two months on October 21.

The blaze destroyed about 1,000 structures and injured five people, according to Cal Fire.

Both suspects are being held in El Dorado County Jail with bail set at $1 million each, according to the district attorney's office. CNN has reached out to an attorney for the men for comment.

Attorney Mark Reichel told The New York Times that the Smiths tried to call 911 and warned other campers after spotting flames at the Eldorado National Forest at the fire's onset, and the two had hired Reichel in August after their homes and phones were searched.

"My clients and I have literally just sat and waited for this day to come," Mr. Reichel said. "As we sit here tonight, we have no idea what the prosecution's theory is on how the fire started."