Fauci, Kamala and other words you pronounced incorrectly in 2020 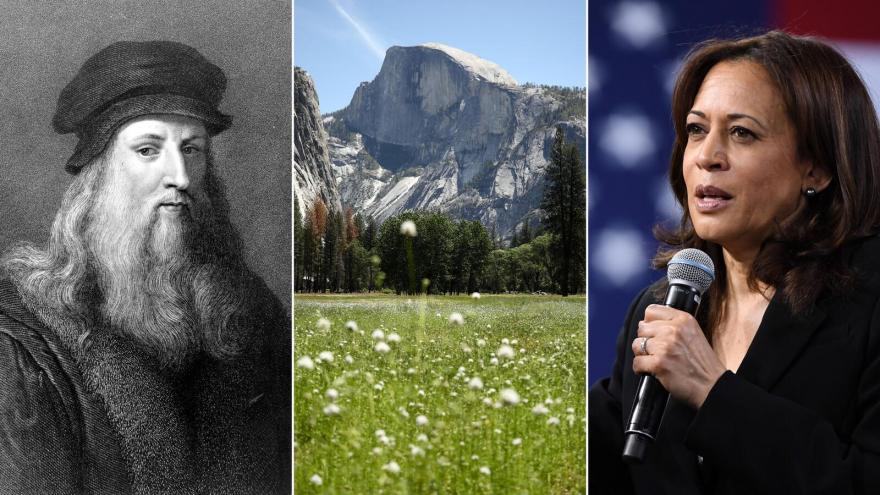 Leonardo da Vinci, Yosemite and Kamala Harris were all in the list of most mispronounced words this year.

Yes, they're names you've seen a lot. And probably names you've mispronounced a lot too, according to a new list from language-learning app Babbel.

Every year since 2016, Babbel's team has asked professional captioners from the U.S. Captioning Company to submit and vote on the words they most often notice get mispronounced by American news reporters, presenters and other TV personalities.

These are last year's mispronounced words

"This annual project, beyond being interesting for linguists and members of the public alike, provides a snapshot of a globalised media, and by extension the American population it serves, grappling with new people, words, languages, concepts and names," Todd Ehresmann, a senior linguist at Babbel, said in a response to CNN questions.

"Our lists of words are intended not only to highlight the changing face of popular discourse, but also to show how the complexities of language and speech are a factor even in the most widely discussed topics of every year," Ehresmann added.

Anthony Fauci (AN-thon-nee FOW-chee): He is the director of the National Institute of Allergy and Infectious Diseases. Fauci has served under six US presidents and played a key role this year in guiding the country through the Covid-19 pandemic.

Bangtan Sonyeondan (PUNG-tahn SOH-nyun-dahn): The full name of the Korean boy band BTS, which roughly translates to "bulletproof boy scouts." The group made plenty of headlines this year: Its 'Dynamite' video broke YouTube's record for most views in 24 hours, it earned its first Grammy Award nomination, and it donated $1 million to Black Lives Matter.

Giannis Antetokounmpo (YON-nis AHN-de-doh-KOON-boh): The Milwaukee Bucks power forward who is originally from Athens, Greece. Earlier this year, Antetokounmpo was named the NBA's Most Valuable Player for the second year in a row, becoming the first European player to win the award twice.

Isaias (ees-ah-EE-ahs): The Category 1 hurricane that made landfall near Ocean Isle Beach, North Carolina, in early August. The storm continued to lose strength as it moved up the East Coast, but left behind damage and at least nine people dead. Captioners reported this word was mispronounced more than any other on the list this year, Ehresmann said.

Kamala Harris (CAW-ma-la HAIR-iss): The senator from California who became the first female, first Black and first South Asian vice president-elect. This week, Time magazine announced it has named Joe Biden and Harris as 2020's Person of the Year.

Leonardo da Vinci (lee-oh-NAR-doe dah-VIN-chee): The Italian artist -- and original Renaissance man -- whose works include the Mona Lisa. But perhaps it wasn't his genius that landed him on this list. According to Ehresmann, he was also the subject of a viral "Da Vinky" meme. Do we want to know?

Mahamayavi Bhagavan Antle (mu-HAH-muh-yaw-vee bag-AH-wahn ANT-uhl): The full name of "Doc" Antle, one of the characters in the Netflix show "Tiger King." In October, he was indicted on wildlife trafficking charges after an investigation by Virginia's attorney general.

Nevada (nev-ADD-ah): Well, this is surprising. The word was "especially topical this year" because of the presidential election, Ehresmann explained. "It is nonetheless interesting that so many Americans mispronounce one of the most-visited of the 50 states," Ehresmann added.

Yosemite (yoh-SEH-mih-tee): The national park in California that was mispronounced by President Donald Trump in August. National Park Service rangers say it correctly in videos welcoming visitors to the 130-year-old park.

CORRECTION: A previous version of this story contained the incorrect pronunciation for Yosemite. It is yoh-SEH-mih-tee.