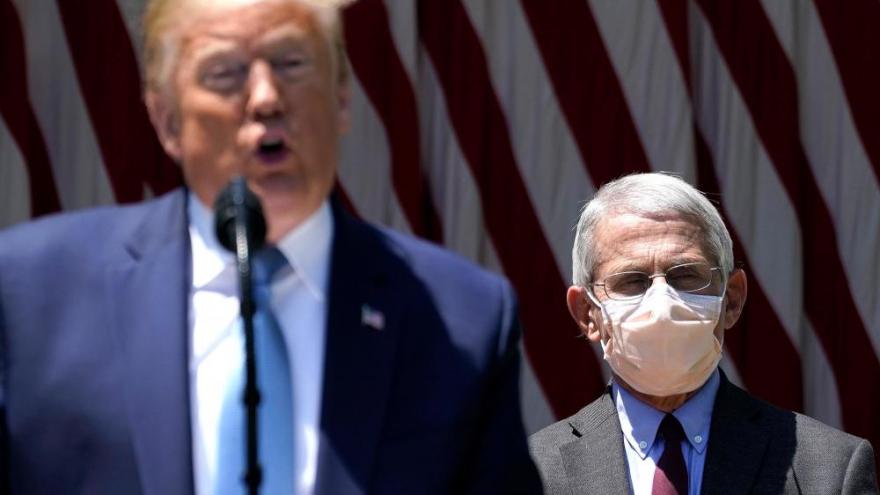 President Donald Trump is flanked by Dr. Anthony Fauci, director of the National Institute of Allergy and Infectious Diseases while speaking about coronavirus vaccine development in the Rose Garden of the White House on May 15, 2020 in Washington, DC.

(CNN) -- Dr. Anthony Fauci on Wednesday called for a cautious approach to reopening the US and implored Americans to wear face masks in public, comments that are at odds with President Donald Trump's push to have America quickly return to normalcy.

"I want to protect myself and protect others, and also because I want to make it be a symbol for people to see that that's the kind of thing you should be doing," Fauci, the nation's top infectious disease expert and a member of the White House's coronavirus task force, told CNN's Jim Sciutto on "Newsroom."

Fauci said he believes that while wearing a mask is not "100% effective," it is a valuable safeguard and shows "respect for another person."

The wearing of masks while out in public has emerged as a politically charged issue as Trump has called for a return to pre-pandemic life in the hopes of revitalizing the US economy. He has repeatedly declined opportunities to wear a mask in public, telling reporters at a Ford plant in Michigan last week that he "didn't want to give the press the pleasure of seeing it," though he did wear a mask while touring parts of the plant.

Fauci's remarks to CNN are the latest instance in which he, as arguably the most visible public health professional in the country, has struck a more cautious tone on reopening than the President.

As part of his calls to return to normalcy, Trump has called for schools to quickly reopen nationwide and for a packed Republican convention in August, going so far as to recently threaten to pull it out of North Carolina unless the Democratic governor can "guarantee" that the arena can be filled to capacity.

Fauci suggested Wednesday to "reserve judgment" about whether political conventions could be held in-person with large crowds gathered in a confined space and to wait to see a "really significant diminution" in the number of new cases and hospitalizations.

"I think we need to reserve judgment right now because we're still a few months from there. Hopefully we will see that diminution. If we don't, then as I've said before, I would have significant reservations about that," Fauci said.

Asked if it's safe for schools to reopen with safety restrictions, Fauci said there needs to be "judgment according to the situation on the ground" and that "we can't say that one size fits all." Earlier this month, Fauci told lawmakers that schools in some places should remain closed in the fall and warned that reopening states too quickly could have dire consequences, resulting in more suffering and death that could be avoidable -- which led Trump to publicly voice frustration with Fauci.

Fauci, however, expressed optimism about a vaccine that could be ready by November or December if "all the things fall in the right place."

The infectious disease expert also cast doubt on the use of hydroxychloroquine as a treatment for coronavirus. Trump, who has frequently disregarded guidance from his own administration, claimed he was taking daily doses of the drug earlier this month.

"The scientific data is really quite evident now about the lack of efficacy for it," Fauci told CNN Wednesday of the drug Trump has touted, adding that there's likelihood of "adverse events with regard to cardiovascular."

Fauci has previously said his relationship with Trump is not contentious, and Trump has insisted as much previously. In person, officials have told CNN this is mostly accurate. They haven't engaged in huge shouting matches or sniping. But Trump's irritation at being publicly undermined has been evident in conversations with his friends and aides, when he's complained that Fauci doesn't seem to be on his side.

Last month, Trump retweeted a message calling for Fauci's firing, but said later he wasn't looking to dismiss him.

This story has been updated with additional comment and background information.