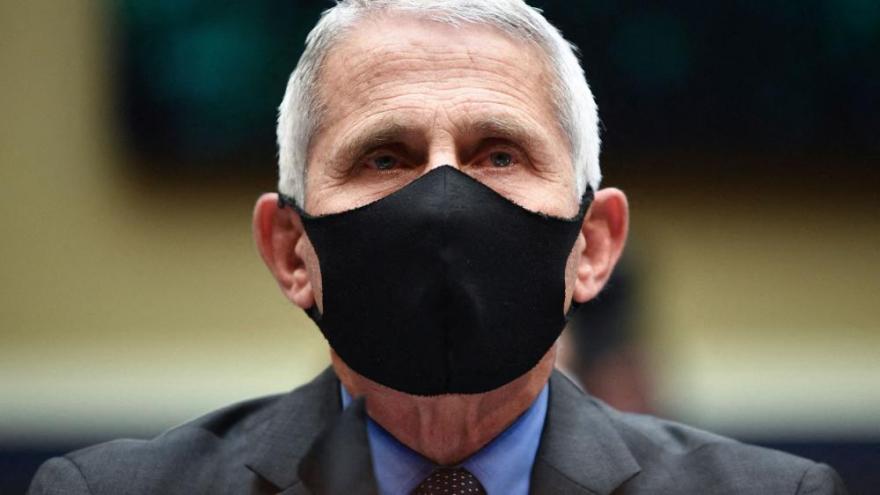 File photo dated June 23, 2020 of Director of the National Institute for Allergy and Infectious Diseases Dr. Anthony Fauci wears a face mask while he waits to testifiy before the House Committee on Energy and Commerce on the Trump Administration's Response to the COVID-19 Pandemic, on Capitol Hill in Washington, DC, USA. As the number of confirmed coronavirus cases in the US reached 3m, and another daily record fell with more than 60,000 new cases, Donald Trump insisted the US was "in a good place" and admitted he "didn't listen to my experts" on July 8. US reaches 3m confirmed Covid-19 cases as Pence pushes for schools to reopen -- as it happened; The president also publicly attacked the US's most senior non-political member of the White House coronavirus taskforce, Dr Anthony Fauci, who said earlier this week the US was still "knee deep in the first wave" of the pandemic.

(CNN) -- US public health officials are not currently advising the White House to intensify restrictions on travel from the United Kingdom, even as a slew of countries moved to suspend flights from there after a new coronavirus variant was discovered.

Dr. Anthony Fauci told CNN that while the US must "without a doubt keep an eye on it," he warned, "we don't want to overreact" and said he would advise against suspending flights from the UK if the matter arises during a White House coronavirus task force meeting on Monday.

Centers for Disease Control and Prevention Director Robert Redfield also told another member of the coronavirus task force, Adm. Brett Giroir, that he is not currently recommending additional travel restrictions.

Fauci said that while he wasn't criticizing other countries that have suspended UK travel, he would not at this time recommend the US take that step.

"Follow it carefully, but don't overreact to it," Fauci said of the new variant.

Fauci said he believes UK officials are doing the right thing by closely monitoring the new strain. England's Chief Medical Officer Chris Whitty warned Saturday that the new variant "can spread more quickly" and was responsible for 60% of new infections in the capital, but he cautioned that there was presently no evidence to suggest that the new variant is more deadly or would neutralize the effectiveness of the newly approved vaccines.

By Monday, dozens of countries across Europe, the Middle East and the Americas had announced travel bans for the UK. Others, such as Greece and Spain, have imposed restrictions that require travelers arriving from Britain to undergo coronavirus tests or quarantine.

Canada announced a travel ban from midnight Sunday for at least 72 hours. In South America, Argentina, Chile and Colombia have all suspended direct flights to and from the UK, and El Salvador has banned anyone entering the country from Britain.

France, meanwhile, announced a temporary ban on all travel and accompanied freight on Sunday night, setting up a potential disaster for trade between the two countries. France said it was working to bring in a European-wide health protocol that would allow freight to start flowing again.

Monday morning, Giroir, the White House's coronavirus testing czar, told CNN's John Berman on "New Day" that there wasn't currently any information on a possible UK travel restriction to or from the US due to the new variant.

"I think we're waiting for CDC kind of recommendations. Last night, talking to Dr. (Robert) Redfield, there was not a recommendation for that. Again, every hour we get more information. I think, as we have done and we need to do, we need to listen to the best experts," he said, noting a task force meeting was happening later Monday.

"I think everything is possible. We just need to put everything on the table, have an open scientific discussion and make a best recommendation," he said when asked if a travel ban was possible.