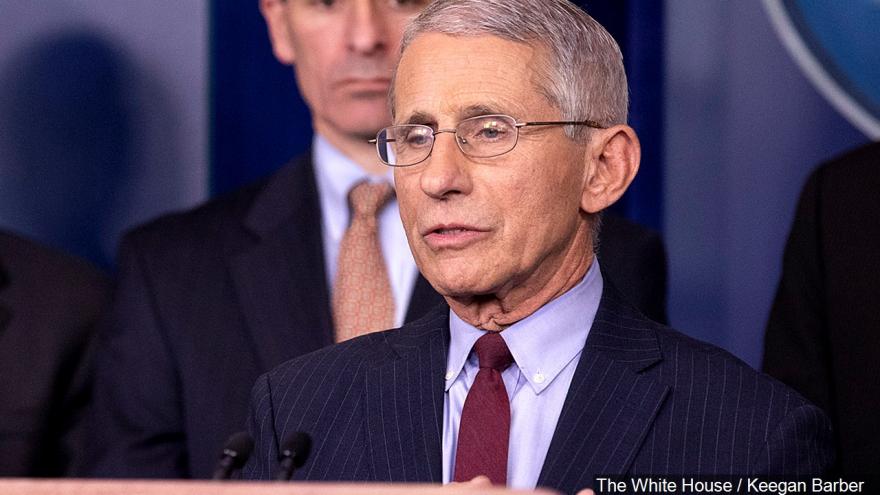 The proposal is still in the discussion stage, Fauci told CNN, and it was not announced at a task force press briefing on Friday afternoon.

Although President Donald Trump has repeatedly downplayed the need for increased testing -- and suggested last week that he asked for testing to be slowed down -- the nation is experiencing a surge in confirmed cases, demonstrating the nation's inability thus far to get a grip on the spiraling pandemic.

And Vice President Mike Pence, who leads the White House's coronavirus task force, claimed during the news conference on Friday that "all 50 states and territories across this country are opening up safely and responsibly" despite the fact that cases have surged in many states and eight states across the country have paused their reopening efforts.

Fauci first mentioned the discussions about testing in an interview with The Washington Post published on Friday morning.

"Something's not working," Fauci said of the nation's current approach in an interview with The Post. "I mean, you can do all the diagramming you want, but something is not working."

Asked about what's not working, Fauci said Friday the US is having trouble identifying spread among asymptomatic individuals and young people, and subsequently, having trouble isolating those individuals. Additionally, he said, the contact tracers are having issues getting into contact with communities seeing potential asymptomatic spread.

A source close to the White House Coronavirus Task Force told CNN that a real schism has developed among the group over the issue of testing.

Several members of the task force feel that the US Centers for Disease Control and Prevention has not handled testing well from the beginning. They say it is "unbelievable" that there still isn't a widespread testing program available, such as antigen testing, the type of technology often referred to as a rapid flu test. The source also mentioned the need for "pooled testing," a method of testing that can scale up and test much larger numbers of people.

Testing has been an issue throughout the handling of the pandemic. The CDC's initial test, given to public health labs, did not work and resulted in a lag in getting tests out to public health departments. As far back as two months ago, Dr. Deborah Birx, the White House coronavirus response coordinator, said that the US needed a "breakthrough" in testing to help screen large numbers of people.

The internal push for a better US testing strategy comes after the US Food and Drug Administration recommended such a strategy earlier this month to companies seeking to make tests for mass screening of people for coronavirus. And last month, local health authorities in the Chinese city of Wuhan said they managed to test more than 9 million people using 6.6 million tests. Chinese media reported that Wuhan used a pooled testing approach.

"What you need to do is find the penetration of infected people in your society," Fauci told The Washington Post. "And the only way you know that is by casting a broad net."

Earlier this week, Birx pointed to how other nations have used pooled testing and suggested that such an approach could drastically expand the nation's knowledge of how and where the virus is spreading.

"We have gone from about 1,000 tests a day to now over 500,000 tests a day in less than three months, but still we need innovation in testing and I think it's more than just more platforms and more tests," Birx said during an online conference of the American Society for Microbiology on Monday. "If you look around the globe, the way people are doing a million tests or 10 million tests is they're doing pooling."

Birx added that pooled testing would allow for people to return to schools and workplaces with the ability to test on a frequent basis.

Fauci also told the Post on Friday that the high levels of asymptomatic spread of the coronavirus are forcing health experts to rethink how to approach mitigating the spread of Covid-19.

somebody who has symptoms," Fauci said. "So it's like, oh my goodness, how do you address that?"