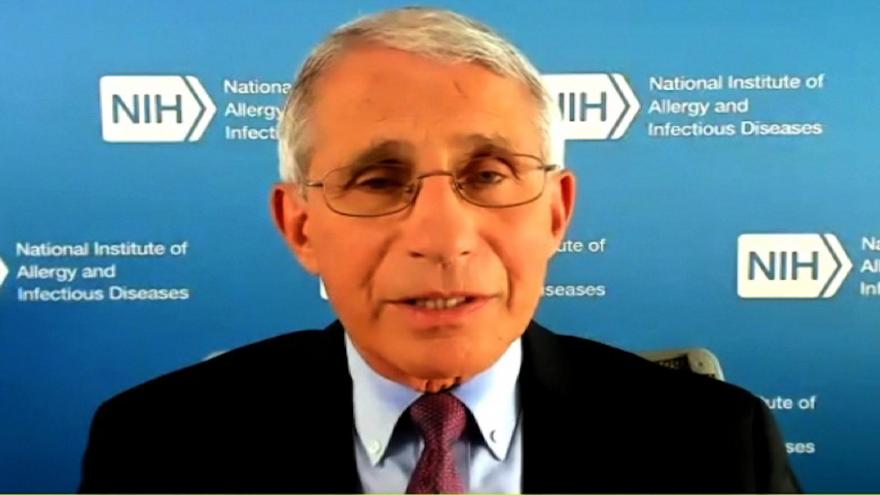 Dr. Anthony Fauci said that the United States has suffered "as much or worse than anyone" from the coronavirus pandemic, a sentiment that contrasts sharply with the tone President Donald Trump has struck as the crisis drags on.

(CNN) -- Dr. Anthony Fauci said Wednesday that the United States has suffered "as much or worse than anyone" from the coronavirus pandemic, a sentiment that contrasts sharply with the tone President Donald Trump has struck as the crisis drags on.

Speaking to CNN Chief Medical Correspondent Dr. Sanjay Gupta during a Harvard T.H. Chan School of Public Health forum, Fauci said that "every country has suffered" from the deadly virus, but that "we, the United States, have suffered as much or worse than anyone."

"I mean, which you look at the number of infections and the number of deaths, it really is quite, quite concerning," said Fauci, the nation's top infectious disease expert and a member of the White House coronavirus task force.

Pressed by Gupta on whether the US is indeed doing the worst in the world, based figures that show how America represents 20-25% of the world's Covid-19 cases and deaths but only holds less than 5% of the world's population, Fauci replied: "Yeah, I mean it is. Quantitatively, if you look at it, it is."

"The numbers don't lie," he added.

The comments from Fauci are at odds with the tone Trump has struck recently when speaking about the deepening pandemic, including during an appearance earlier Wednesday on "Fox and Friends" in which the President highlighted the US' economic return and once again claimed that the virus was going to "go away."

"We've done it right," Trump said of the US' handling of the pandemic. Now (our economic bounceback) looks like a very strong 'V,' based on the all of the numbers we're getting."

The President has also maintained that the pandemic is under control, while his health experts, including task force coordinator Dr. Deborah Birx, have underscored that the coronavirus is now widespread in rural and urban areas around the country.

Trump made one such assertion in an Axios on HBO interview aired Monday, saying the virus is "under control." But when confronted with the fact that about a thousand Americans are dying each day from the virus, the President responded: "They are dying. That's true. And you -- it is what it is."

"But that doesn't mean we aren't doing everything we can. It's under control as much as you can control it," he added.

Trump, who met with members of the White House task force on Tuesday, is still struggling to fully grasp the severity of the coronavirus pandemic, a source familiar with the meeting told CNN.

During the meeting, officials on the task force continued to have trouble convincing Trump to take the pandemic more seriously, the source said, adding that he repeatedly attempted to change the subject when some members of the task force tried to stress the dire nature of the situation to him.