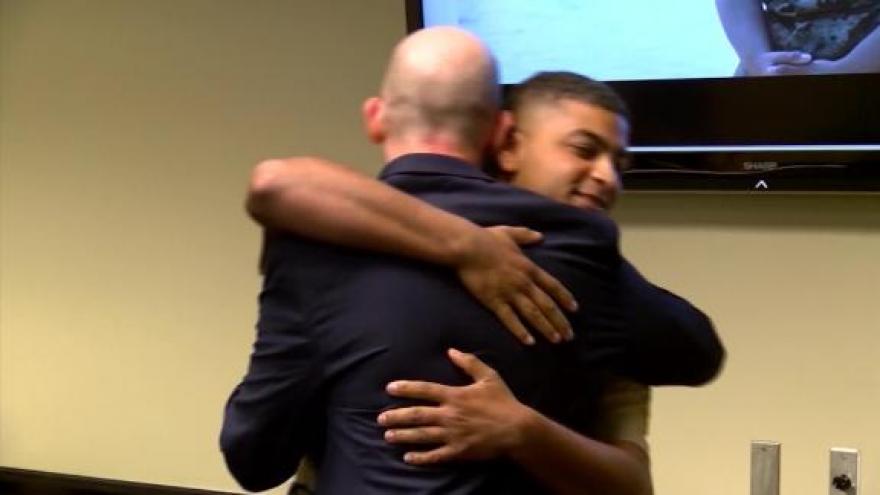 (CNN) -- FBI Special Agent Troy Sowers thought his retirement send-off would include donuts and coffee. He didn't expect to be reunited with the infant he rescued at the very beginning of his career two decades earlier.

In 1997, Sowers was a rookie agent in Washington state -- in the field only two months -- when he was put on a kidnapping case, according to CNN affiliate WATE.

A woman posing as a doctor had taken a 9-pound, 5-ounce baby boy from his mother's hospital room, and a 19-hour hunt for the newborn infant ensued, according to the FBI. Sowers found the baby abandoned in a cardboard box behind a convenience store.

It was a story Sowers told often over the next 22 years when he was looking back on the highlights of his career, he told WATE. When it came time for his retirement from the Knoxville bureau, the station said Sowers' daughters began looking for the baby their father pulled from the box.

At Sowers retirement ceremony on Friday, Assistant Special Agent in Charge Sherri Onks flipped through a highlight reel of his career. But instead of a picture of the baby from the box, out walked US Marine Cpl. Stewart Rembert, according to the FBI.

Rembert wanted to thank the man who saved his life, and Sowers got to hear about the life he saved. One that included a childhood with five brothers and sisters, high school years in the drum line and the Junior Reserve Officers' Training Corps and three years in the Marine Corps, the FBI said.

"I'm proud of anybody that serves others above themselves," said Sowers. "The fact that he is now doing that makes that case even more special."