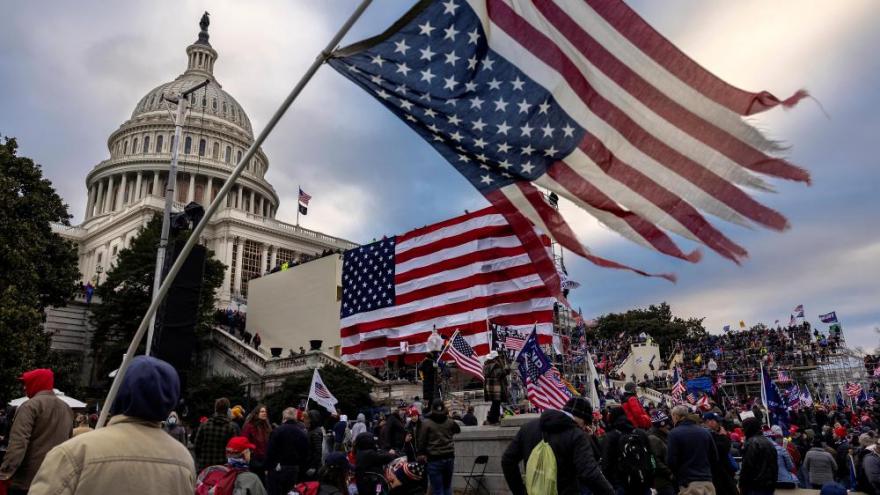 House investigators have received the first batch of documents they requested from the FBI and intelligence agencies as part of their ongoing probe into security failures around the January 6 US Capitol attack, according to an official from one of the committees investigating the matter.

(CNN) -- House investigators have received the first batch of documents they requested from the FBI and intelligence agencies as part of their ongoing probe into security failures around the January 6 US Capitol attack, according to an official from one of the committees investigating the matter.

The FBI and the National Counterterrorism Center provided materials in response to a detailed request from January 16 made by four House committees that are conducting a joint investigation of the events surrounding the attack. The review is focused on three main questions: what did federal law enforcement and intelligence agencies know before, during and after the attack? How did foreign adversaries seek to exploit the event? And what's been done to address domestic terror threats in the weeks since?

The official who spoke to CNN did not elaborate on the specifics of the documents provided to the committee.

The joint probe conducted by the House Intelligence, Oversight, Homeland Security and Judiciary committees is also investigating the role private companies, including social media platforms like Parler, played in potentially helping fuel the attack and protect the identity of rioters involved.

In a letter sent to company COO Jeffrey Wernick last week, House Oversight Committee chair Rep. Carolyn Maloney noted that multiple Parler users have been arrested and charged for their roles in the riot, "with the Department of Justice citing in several instances the threats that individuals made through Parler in the days leading up to and following the attack."

The first batch of documents sent by the FBI and NCTC indicates federal agencies are cooperating with lawmakers, who are aggressively seeking more evidence than what was collected for the second impeachment trial of former President Donald Trump. A congressional source told CNN the massive scope and severity of riot merits a deep investigation to uncover every detail, and hold officials accountable to the public.

Congressional committees have already announced plans to call witnesses for open hearings starting next week, something that was discussed, but never materialized during the impeachment trial.

Those plans are expected to continue even as House Speaker Nancy Pelosi this week called for an independent commission to investigate the incident, a proposal that has received mixed reviews from some GOP lawmakers on Capitol Hill.

Lawmakers themselves could face scrutiny for their role in the attack. Many Republicans joined Trump in pushing false election claims in the weeks leading up to the attack, while some have raised questions about Pelosi's role in the security failures of January 6 and say that should also be part of any investigation into the attack on the Capitol.

Senate and House hearings next week

The Senate Intelligence Committee is also looking at the intelligence failures related to January 6, including the nexus between domestic disinformation and possible foreign intervention, according to a source familiar with the probe. That panel has started making requests for information, the source said.

Additionally, the Senate Homeland Security and Governmental Affairs and Senate Rules committees are conducting a joint investigation with plans to hold their first public hearing next week on the security failures that left five people dead, more than 140 officers injured, and raised questions about whether the trauma of the day contributed to two officer suicides.

It's unclear whether Irving or Stenger will appear on Capitol Hill Tuesday, but if they do, their testimonies could be monumental. According to a letter from Sund to congressional leadership, Sund asked his supervisors, Irving and Stenger, to send the National Guard to the Capitol in the days before the riot. Sund accused Irving of denying the request over concerns congressional leaders wouldn't like the "optics" of armed military members patrolling the Capitol.

In the letter, Sund said Stenger told him to ensure the Guard was in a "forward leaning" position prior to the assault.

As Sergeants At Arms, Irving and Stenger bridged the gap between politics and policing. As members of the Capitol Police Board -- the most immediate oversight committee for USCP -- they were the final decision makers as USCP prepared its posture for January 6.

The hearing won't serve entirely as a fact-finding mission. Lawmakers will undoubtedly grill Sund, Irving and Stenger about their failures leading up to the riot. Contee will likely feel less heat from lawmakers, as MPD swooped in to assist after staging law enforcement outside the Capitol Complex.

The House Appropriations committee, which has direct oversight of the US Capitol Police, also plans to hold a hearing next Thursday with acting USCP Chief Yogananda Pittman and acting House Sergeant at Arms Timothy Blodgett. This will mark the first time either has appeared in an open hearing. Pittman apologized to lawmakers for security failures in a closed door hearing last month.

The House committees conducting the joint review have not yet scheduled hearings but do have subpoena power to compel testimony if and when the investigation reaches that stage. Congressional sources say lawmakers realize the various committee investigations may overlap one another, which has prompted several committees to combine their efforts. The panels are also working to establish clear lanes for each investigation.

For now, one of the broadest joint committee reviews is led by House Intelligence, Oversight, Homeland Security and Judiciary.

It is focused on several core issues, including, "what the Intelligence Community and federal law enforcement knew about the threats of violence, whether that information was shared or not, and whether the threats had any nexus to foreign influence or misinformation efforts," according to the same January 16 letter.

Lawmakers also want to know if any current of former holders of security clearances were involved in the riots, what warning signs may have been missed and if any measures were taken to apprehend or prevent travel by any domestic extremists involved in the attack, the letter states.

Separately, the House Appropriations Committee, which was the first Congressional committee to have a hearing on the violent insurrection, is conducting its own review focused primarily on internal Capitol security, including assessments and communications between the various law enforcement agencies throughout January 6 attack.

Additionally, retired Lt. Gen. Russel Honore is conducting an independent review of the security posture on Capitol Hill at the direction of Pelosi and is expected to provide recommendations based on his findings next month.

Congressional sources have indicated that even they are unsure how the outside commission would interact with the numerous committee probes.

While leading House Republicans haven't expressed outright opposition as they await more details, they warn the commission shouldn't relitigate the impeachment. And in the Senate, there are questions from Republicans about whether Congress is better positioned to investigate the January 6 riot than a new, outside entity.

Democrats say that the commission must examine all facets of the riot, which include the role that Trump played stirring up false claims of election fraud that alleged rioters charged by federal prosecutors have cited in explaining why they attacked the Capitol on January 6.

"I fully support Speaker Pelosi's 9/11-style commission. One thing they will find is that Donald Trump incited the insurrection," California Rep. Ted Lieu, one of the House impeachment managers, told CNN on Monday. "Leading from that are a whole host of questions we don't know yet, such as how do we have such a massive breakdown in security?"

On Thursday, Pelosi reiterated her support for forming a commission, telling reporters it must have subpoena power and be "strongly bipartisan."

At the same time, Pelosi's spokesman Drew Hammill told CNN that the House committees are expected to continue their work if a commission is formed, noting the 9/11 Commission had inside and outside pieces.

The House Appropriations Committee also plans to continue its work as the commission gets underway.

"Once a 9/11-type commission is established, the Appropriations Committee will share the information gathered through the Committee's ongoing investigation with the commission" House Appropriations committee communications director Evan Hollander told CNN.

Former New Jersey GOP Gov. Thomas Kean, who served as chair of the 9/11 Commission, said the overlap of Congressional investigations with the commission should not be a problem.

"There's no reason both groups can't work together," but reminded that "an independent commission has advantages that Congress doesn't have" such as more resources, staff and credibility because the commission is not partisan.