Brian Laundrie and Gabby Petito were involved in an incident in Wyoming restaurant in late August, witnesses say 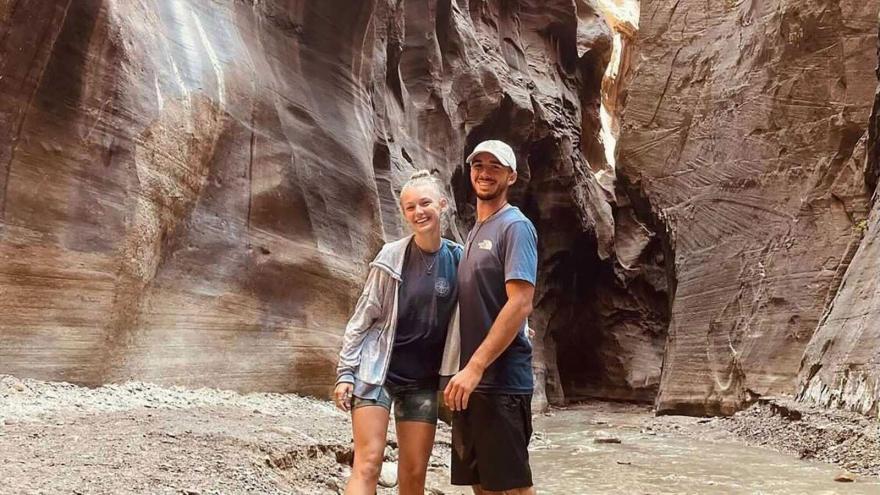 The FBI is asking for the public's help in finding Gabby Petito's fiancé Brian Laundrie after a coroner made an initial determination that Petito died by homicide. A pictures of Gabby Petito and her fiancé before her disappearance is seen.

(CNN) -- A couple from Louisiana who were vacationing in Jackson, Wyoming, last month said Wednesday they saw an incident involving Gabby Petito and Brian Laundrie in a restaurant in one of the last sightings of Petito before her death.

Nina Angelo told CNN on Wednesday that she and her boyfriend, Matt England, saw a "commotion" as Petito and Laundrie were leaving The Merry Piglets Tex-Mex restaurant on August 27.

Angelo said Petito was in tears and Laundrie was visibly angry, going into and out of the restaurant several times, continuing to show anger toward the staff around the hostess stand.

The couples' waitress was also visibly shaken by the incident, according to Angelo, who told CNN she did not see any violence or physical altercation between Petito and Laundrie.

A manager at The Merry Piglets told CNN that she did see "an incident" at the restaurant and called the FBI on Wednesday. The manager declined to give CNN her name or describe what happened and said the restaurant did not have surveillance video of the incident.

When asked by CNN whether they had received a tip about Petito and Laundrie's presence at The Merry Piglets, an FBI spokesperson responded, "To protect privacy, we do not comment on contacts that FBI has or has not had with any individuals."

Police in Florida said in a recent search warrant affidavit that Petito's mother received an odd text on August 27 and that it was the last communication from her. Petito, who was chronicling the couple's trip through national parks, also stopped posting to social media at that time.

Petito was first reported missing by her family on September 11 and her remains were found Sunday in Grand Teton National Park. The Teton County coroner in a preliminary autopsy determined the manner of death was homicide but has not disclosed the manner in which she died.

Laundrie, who arrived at his parents' home in North Port, Florida, three weeks ago, has not spoken to police about the case. His parents have told authorities they haven't seen him since last Tuesday.

The FBI has asked for the public's help in locating Laundrie as a task force in Florida has searched a large nature preserve in Venice.

A law enforcement underwater dive team joined the effort at the Carlton Reserve in Florida on Wednesday.

A large van and boat from the Sarasota County Sheriff's Office arrived midday Wednesday at the reserve, a swampy 25,000-acre reserve in Venice, Florida, where Laundrie told his parents he was headed last week.

The dive team, called the Sheriff's Underwater Recovery Force (SURF), is made up of "highly trained underwater specialists" who are "called upon to search for evidence of crimes and victims of drowning, water accidents and foul play," the sheriff's department website says.

North Port Police said the arrival of the dive team "does not mean anything has been found. It's a part of the overall search process."

The team, made up of about 10 divers, was requested by North Port Police on Wednesday morning, said Sarasota County Sheriff's office spokesperson Kaitlyn Perez.

"These divers are specifically trained and very talented in low visibility bodies of water," Perez said. "They dive down where you and I can't see anything at all. They utilize technology and other special equipment to help them get down deep into really deep bodies of water, so they're out there right now to recover whatever it is that they might find."

The fourth day of searching the reserve ended Wednesday evening, according to officials.

"Nothing found. We will be back out Thursday, similar operation," North Port Police tweeted.

The ongoing search comes as investigators try to piece together what happened to Petito, 22, and Laundrie, 23, on their road trip in a white Ford Transit van through the American West this summer.

Throughout the trip, the couple had posted online regularly about their travels with the hashtag #VanLife, but those posts abruptly stopped in late August. Laundrie and the van -- but not Petito -- went to his parents' home in North Port, Florida, on September 1. Her family, unable to get in touch with her, reported her missing 10 days later.

Laundrie's parents then reported him missing on September 17, saying he had left home three days earlier to go to the reserve and hadn't returned.

In the days since she was reported missing, Petito's story has become a national obsession for many, spurring digital detectives to comb through the couple's online trail to try to solve the case. The story has also further highlighted the tens of thousands of missing persons stories that do not garner such intense interest among the public.

Given the national attention on the case, several people have come forward to say they interacted with the couple in late August. And evidence from a 911 call about a "domestic dispute" involving Petito and Laundrie shows the couple's volatile relationship was not as aspirational as their sun-drenched lives on Instagram and YouTube suggested.

Investigators have used ATVs, dogs, drones and more as part of their ongoing search for Laundrie at the reserve.

The swampy, wild landscape of the reserve has made the search particularly difficult.

"Please be aware, the Carlton Reserve is a vast and unforgiving location at times. It is currently (waist) deep in water in many areas," police said. "This is dangerous work for the search crews as they are wading through gator and snake infested swamps and flooded hiking and biking trails."

Authorities also searched the family home on Monday after getting a search warrant for the property. FBI agents removed a number of items from the home and towed away a Ford Mustang convertible.

In addition, Laundrie's parents, Christopher and Roberta Laundrie, were questioned at their home by the FBI.

Witnesses tell police about their interactions with the couple

In a series of videos on TikTok, Miranda Baker said she and her boyfriend gave Laundrie a ride on August 29 in Wyoming -- and that he claimed he was camping by himself for multiple days while Petito was back at their van working on social media posts.

Baker said they picked up Laundrie while he was hitchhiking in Colter Bay, Wyoming, which is not far from where Petito's remains were found. He offered to pay $200 for the ride before he even got in the car, she said.

In her TikTok videos, Baker said that when Laundrie found out she and her boyfriend were going to Jackson Hole instead of Jackson, he got agitated, asked that the vehicle stop, and got out near the Jackson Dam. She said they dropped him off less than 30 minutes after picking him up.

Baker said she has spoken to law enforcement about the interaction with Laundrie. North Port Police confirmed to CNN that Baker spoke with the department before posting the videos on TikTok.

CNN has not been able to independently verify Baker's claims. The FBI has not returned CNN requests for comment.

Further, evidence has also emerged suggesting tension was building between the couple.

A man who saw the domestic dispute between Petito and Laundrie in Utah last month said, "They were talking aggressively at each other, and something seemed off."

In a handwritten sworn statement, the witness named Chris -- whose last name was redacted in the document provided by Moab City Police to CNN -- said it appeared that the two were arguing over control of Petito's phone. "At one point she was punching him in the arm and/or face and trying to get into the van."

The witness said he heard Petito say, "Why do you have to be so mean?" although Chris added that he couldn't be sure if the comment was meant to be taken seriously. Moab City Police responded to the incident, and the couple agreed to spend the night apart.

There is also a 911 recording of the incident in Moab on August 12 when police confronted the pair. In the recording from the Grand County Sheriff's Office, a caller reported what he called a "domestic dispute" between a couple.

"We drove by and the gentleman was slapping the girl," the caller says. "Then we stopped. They ran up and down the sidewalk. He proceeded to hit her, hopped in the car, and they drove off."