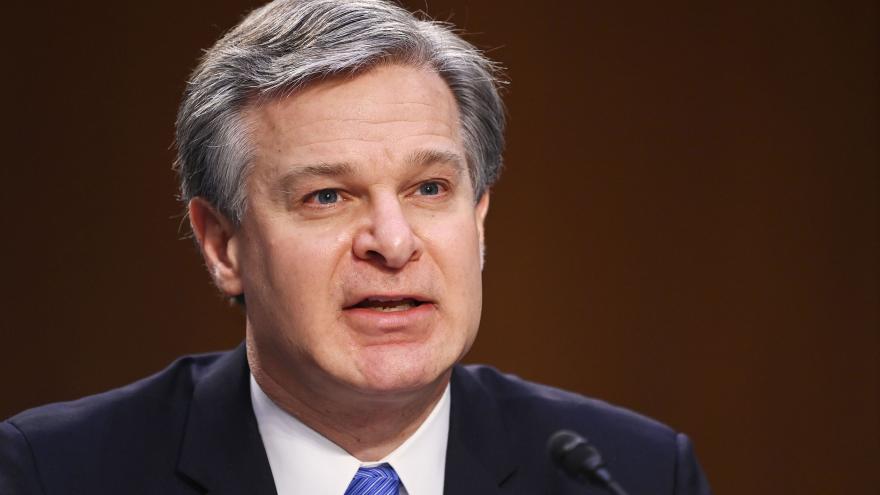 FBI Director Chris Wray said June 10 that he is \"not aware of any investigation\" against former President Donald Trump in connection with the January 6 insurrection. - MANDEL NGAN/POOL/AFP via Getty Images

(CNN) -- FBI Director Chris Wray said Thursday that he is "not aware of any investigation" against former President Donald Trump in connection with the January 6 insurrection.

"I'm not aware of any investigation that specifically goes to that, but we have hundreds and hundreds and hundreds of investigations related to January 6, involving lots and lots of different pieces of it," Wray told the House Judiciary Committee in response to a question from Democratic Rep. Sheila Jackson Lee of Texas, who had repeated various statements made by Trump prior to the attack on the US Capitol, asking the FBI director if "Trump's actions, words, deeds, on that day" were seen as a contributing factor to the violence.

It was part of an aggressive line of questioning from Democrats on the committee who have been trying to pin the attack on the former President, while suggesting the FBI hasn't taken seriously the threat of White supremacy that has been highlighted as more arrests are announced.

Chairman Jerry Nadler set the tone for the hearing in his opening remarks, focusing on what the FBI knew about the threat ahead of the January 6 attack, which resulted in the death of five people, more than 100 law enforcement officers injured and millions of dollars in damages to the Capitol building.

"That attack is very much still with us, Director Wray. The threat is ongoing and we need your help to do the work of reckoning on with it," the New York Democrat said. "For a start, we need to understand what the bureau knew in the run up to the attack, when it knew it, and what prevented it from disrupting the work of the terrorists who planned it, because we know the attack was not a spontaneous event."

More than five months after hundreds of pro-Trump supporters gathered in Washington, DC, for a "Save America" rally that was littered with rhetoric from Trump and his allies to stop the Electoral College count, nearly 500 people have been charged in connection to the insurrection. As the federal government continues to announce arrests, Wray said he expects more serious charges.

Among those charged have been members of the Oath Keepers, Proud Boys, and other far-right extremist organizations. More than a dozen Oath Keepers have conspiracy charges against them in connection to the riot.

Wray testified that the FBI "does not and should not police ideology" nor do they "investigate groups or individuals based on the exercise of First Amendment protected activity alone."

"But when we encounter violence and threats to public safety, the FBI will not hesitate to take appropriate action," he said.

Wray said that his "utmost concern" is the increase in violence across the country, adding that the FBI has initiated more hate crime investigations this fiscal year than in the past five years.

But Nadler took aim at the bureau, saying the FBI has for "far too long downplayed" the threat of White supremacy. The FBI, he said, has "lumped together a wide range of activities under the term racially motivated violent extremism, as if there were any equivalence whatsoever between Black and brown activists marching for justice and the right-wing extremists who attack the Capitol Police and try to hang Mike Pence."

Democratic Rep. Cori Bush of Missouri, who has been an activist since the police killing of Michael Brown in 2014, said she knows first-hand that the FBI utilizes investigative materials like surveillance aircrafts to monitor protests related to racial justice.

"The Bureau has a White supremacy problem within its ranks. The choice to not pursue White supremacist violence like what we saw on January 6 is not because the Bureau does not have the resources or the statutory discretion to do so," Bush said. "It is a blatant dismissal of White supremacy as a threat. It is racist, it's unethical, it's unconscionable."

Wray was unable to respond to Bush as the allotted five minutes given to each member of Congress to ask questions had expired.

Democratic Reps. Veronica Escobar of Texas and Mondaire Jones of New York separately pressed Wray about their concerns of possible threats to democracy, like Trump's theory he's been sharing with aides -- first reported by the New York Times -- that he'll be reinstated in August, and former national security adviser Michael Flynn appearing to support a Myanmar-style coup in the US in remarks captured on video. For months, QAnon and Trump-supporting online forums have celebrated the deadly military coup in Myanmar and suggested the same should happen in the United States so Trump could be reinstated as president. The former Trump national security adviser has claimed he wasn't endorsing such a coup.

"In my role I think I have to be careful to speak through our work and when the FBI director speaks, I speak through our investigations, and our intelligence products. And so I just, I don't think I should be starting to start chiming in on other people's public chatter or rhetoric, no matter what it is," Wray responded to Jones' inquiry. He gave a similar response to Escobar.