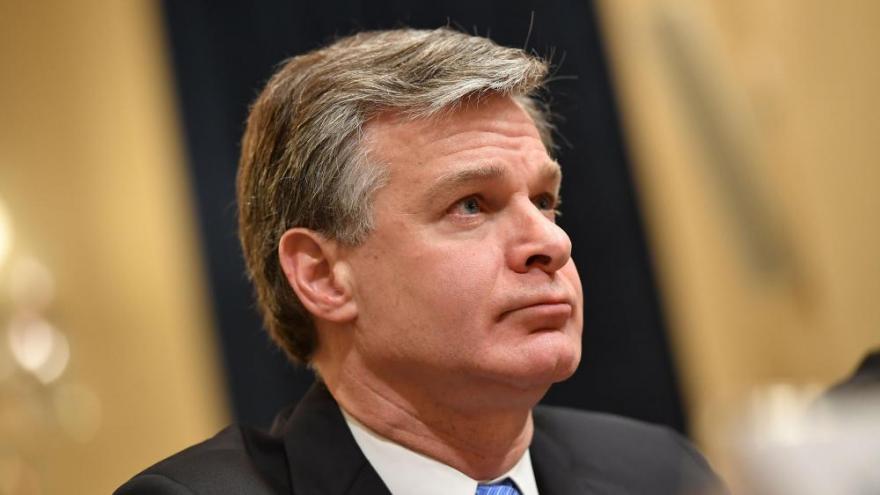 FBI Director Christopher Wray testifies before the House Homeland Security Committee on global terrorism and threats to the homeland in the Cannon House Office Building on Capitol Hill in Washington, DC on October 30, 2019.

(CNN) -- FBI Director Christopher Wray said Thursday that Russia has been "very active" in its efforts to influence US elections, with the primary goal being to "denigrate" Democratic presidential nominee Joe Biden.

Wray's comments come as President Donald Trump and several other top administration officials have recently attempted to play up the theory that China is meddling to get Biden elected, while downplaying well-founded reports that Russia is trying to help Trump win again, like it did in 2016.

Foreign election interference efforts differ from what was observed in 2016, when there was also an effort to target election infrastructure, Wray said. "We have not seen that second part yet this year or this cycle, but we certainly have seen very active, very active efforts by the Russians to influence our election in 2020," he added.

According to Wray, Russia is using social media, proxies, state media and online journals to sow "divisiveness and discord" and "primarily to denigrate Vice President Biden and what the Russians see as kind of an anti-Russian establishment."

Intelligence officials have said they have uncovered evidence that Russia is currently interfering in the election to hurt Biden's campaign. Separately, some evidence has already emerged about Moscow's efforts, including Facebook's announcement earlier this month that a troll group that was part of Russia's attempt to interfere in the 2016 election is trying to target Americans again.

"We assess that China prefers that President Trump -- whom Beijing sees as unpredictable -- does not win reelection. China has been expanding its influence efforts ahead of November 2020 to shape the policy environment in the United States, pressure political figures it views as opposed to China's interests, and deflect and counter criticism of China," the top US intelligence official on election security, Bill Evanina, said in an unprecedented public statement issued last month.

Evanina went on to say, "China will continue to weigh the risks and benefits of aggressive action," but to date has primarily engaged in overt efforts like ramping up public criticism of the current administration over non-election-related issues, including its coronavirus response and move to close Beijing's consulate in Houston.

Russia, on the other hand, is using a range of measures primarily to denigrate Biden and what it sees as an anti-Russia establishment, Evanina wrote in the same statement.

"This is consistent with Moscow's public criticism of him when he was Vice President for his role in the Obama Administration's policies on Ukraine and its support for the anti-Putin opposition inside Russia," Evanina said. "Some Kremlin-linked actors are also seeking to boost President Trump's candidacy on social media and Russian television."

But in an interview with CNN's Wolf Blitzer earlier this month, Attorney General William Barr went out of his way to dilute the intelligence community's assessment that Russia is again actively interfering in a US election.

"I accept that there is some preliminary activity that suggests that they might try again," Barr said of Russia. "It wouldn't surprise me if Russia tries something again of the same general genre before."

US intelligence officials and the Senate Intelligence Committee have made bolder assertions warning of the threat Russia poses this year after it hacked the Democrats in 2016 and ran social media influence operations during the 2016 and 2018 elections.

"The threat is ongoing," Sen. Richard Burr, a North Carolina Republican who chaired much of the Senate Intelligence Committee's investigation into Russian election interference, said in a statement last month after the panel released the findings of its bipartisan probe. "My hope is that this report and the Committee's work will provide the American people with more insight into the threats facing our nation and the steps necessary to stop them."