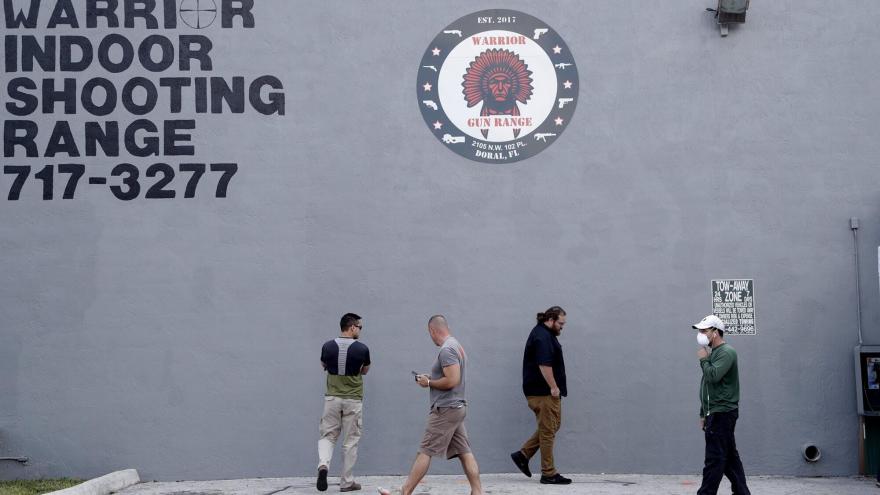 The FBI conducted more firearm background checks in 2020 than in any year since the agency began keeping statistics in 1998, according to new data released by the agency on Monday.

(CNN) -- The FBI conducted more firearm background checks in 2020 than in any year since the agency began keeping statistics in 1998, according to new data released by the agency on Monday.

The milestone is raising concerns among some gun control advocates, who warn that election-related tension and possible civil unrest could be made more dangerous as Americans appear to be arming themselves in record numbers.

With two months remaining in the year, the approximately 16.5 million background checks conducted between January and October 2020 for the sale or transfer of firearms and accessories eclipsed every other year on record.

The previous record was set in 2016, when the FBI conducted 14.9 million checks, and had mostly declined until 2020. In 2019, the agency conducted approximately 12.3 million firearm background checks.

Under US law, federally licensed gun dealers must run checks on every buyer, whether a purchase is made in a store or at a gun show. A buyer presents his or her identification to the seller, fills out a form from the US Bureau of Alcohol, Tobacco, Firearms, and Explosives -- which lists the buyer's age, address, race and any criminal history -- and then the seller submits the information to the FBI for checks against databases in order to ensure a criminal record does not preclude the purchase.

As CNN previously reported, more and more Americans appeared to be arming themselves in 2020 following months of continued fears over the deadly coronavirus pandemic and images of some people causing damage after hijacking peaceful protests demanding racial justice.

The surge in firearm background checks since the beginning of the year largely coincided with the deadly coronavirus pandemic, which has resulted in over 230,000 deaths in America, and various stay-at-home orders issued by federal, state and municipal governments.

In the month of June, the country also witnessed incidents of unrest following the death of George Floyd at the hands of police officers in Minneapolis, as individuals set fire to police facilities, destroyed buildings and looted commercial establishments.

While the overwhelming number of protests calling for racial justice after Floyd's death were peaceful, damage caused by individuals resulted in government officials around the country opting for a show of force by law enforcement, and, in some instances, calling up members of the National Guard to patrol American streets.

"Firearm sales go up in times of uncertainty because Americans know their safety is ultimately in their own hands," an NRA spokesperson told CNN.

However, advocates working to limit greater access to firearms warn that more guns could mean more deaths, and remain especially concerned about the impact record-setting gun sales could have on any violence that follows the 2020 election.

"If we are to see violence connected to the election, our nation's high levels of firearm ownership -- and the fact that those numbers have been increasing this year -- will pose a heightened risk to public safety as confrontations or disagreements could escalate into something far more deadly."