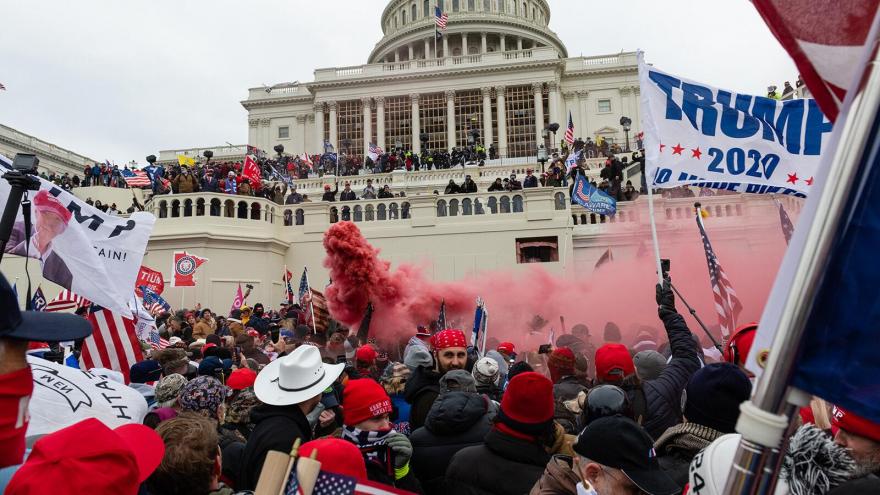 The FBI has infiltrated a "Bible study" group in Virginia that after the January 6 riot had members discussing surveilling the US Capitol and their wish for secession from the US, and investigators closely followed one member's plans to build and test Molotov cocktails, according to recently unsealed court records.

(CNN) -- The FBI has infiltrated a "Bible study" group in Virginia that after the January 6 riot had members discussing surveilling the US Capitol and their wish for secession from the US, and investigators closely followed one member's plans to build and test Molotov cocktails, according to recently unsealed court records.

The startling new case, landing six months after the pro-Trump insurrection, adds to the more than 500 Capitol riot federal criminal cases already in court and fleshes out what's known about the Justice Department's understanding of the continued interests of right-wing extremists to allegedly interfere with the US government and discuss with each other how to do so. The new case highlights one group member's apparent interest in a second American civil war.

The newly disclosed criminal case against Virginia man Fi Duong -- who also goes by "Monkey King" and "Jim," according to the court record -- arose after Duong interacted with undercover law enforcement officers several times on January 6 and into recent months, when the FBI ultimately gained access to his group in Virginia then accompanied him to an old jail as Duong allegedly pursued bomb-building.

Law enforcement's undercover interactions with Duong and his contacts since January are laid out in a 14-page statement from the FBI filed in court in recent days to support his arrest and initial charges.

Duong was arrested last week, after the Justice Department charged him with four federal crimes, including entering the restricted grounds of the Capitol and obstruction of an official proceeding related to his alleged participation in the siege on January 6, according to his court record.

He has not yet entered a plea.

On January 6 in downtown Washington, Duong spoke with an undercover Metropolitan Police officer, according to his charging papers. Duong was dressed in black, in an alleged effort to disguise himself as the leftist group antifa, investigators say. During the conversation, Duong asked the undercover officer if they were a "patriot," and identified himself as an "operator," according to FBI records supporting his arrest.

As the riot progressed, the undercover officer saw him again, kneeling by a marble fence on a terrace of the Capitol -- an area that was normally restricted, according to court records. Investigators say Duong also videotaped himself inside the Capitol and was captured on the building's cameras wearing a white mask shaped like a wide grin.

The charges Duong faces are minor compared with what other right-wing extremists have faced for their alleged roles in the insurrection. He has not yet been formally indicted, and his charges could be expanded or rewritten in the coming weeks.

He has not been charged with crimes related to any post-January 6 conduct, including the alleged bomb planning.

In mid-January, an undercover agent from the FBI made contact with Duong, who was a member of a secretive "loosely affiliated, unnamed group of like-minded individuals" in Virginia, according to court records made public on Tuesday describing the additional allegations against him.

Though Duong put a member of the militia-like extremist group the Three Percenters in contact with his group, the FBI noted in court, his group appeared to exist separately from any known major groups previously identified as taking part in the Capitol riot.

"For me, right now, my goal is in building the infrastructure first, to then building up the individuals that will compose of this, perhaps long after I'm gone," investigators say Duong told the undercover FBI agent in March. He also said he had written a "manifesto," the court record says.

"If I get into a gun fight with the feds and I don't make it, I want to be able to transfer as much wisdom to my son as possible," investigators noted him saying, according to a court filing.

Duong told the FBI agent that his group tried to be "cloak and dagger" and wanted to "build resistances," according to court records. The agent then attended what the group members called a "Bible study" meeting at an Alexandria, Virginia, house in February, where the group members discussed the Bible and secession, weaponry and combat training, and using methods to make their communications private, according to court records.

One person in the group commented at the meeting about creating "a semi-autonomous region" for Virginia. "I like the Constitution; I don't like the Democratic sh*t this region keeps voting for," the person said, according to the FBI.

In early February, Duong and associates began to use encrypted messages to discuss gathering intelligence on the restricted zone that the National Guard had established around the Capitol, according to the FBI.

One group member, identified in court records as "Associate 1," said he took video of Capitol entrances and would share it over an encrypted messaging app. He later claimed to have deleted the video but said that Duong had a copy, according to the charging documents.

"How do we feel about an Intel run around the Capitol tonight?" the FBI said the person wrote. "Fewer of them out. Posture may be lowered. Good opportunity to expose weaknesses."

Duong had compiled a cache of weapons at his home in Alexandria, investigators say, including an AK-47 and five boxes full of materials to make and test Molotov cocktails.

At one group meeting at Duong's house in May, the undercover agent saw five cardboard boxes filled with about 50 glass bottles, and heard him and another person discuss what they could fill them with to make explosives, according to the court papers.

The agent later asked Duong more about the Molotov cocktails and his plans for them, keeping tabs on interest he had in testing them. Places they discussed included a rock quarry in West Virginia, Duong's backyard or at a former prison in Virginia, according to the court record.

Ultimately, Duong and the undercover FBI agent met another undercover agent in mid-June at the former prison to discuss testing homemade bombs, the FBI wrote in its statement supporting Duong's arrest. Duong asked them about holding training at the site, too, according to the FBI.

"Give it about another three weeks," Duong told one of the undercover agents, as they were leaving the jail site, about his plans for testing. "Money's really tight right now. I gotta have a few boring weekends, stay at home and no do sh*t."

Later that day, Duong riffed to the undercover FBI agent about the cost of peace versus standing one's ground.

"We're not a point where people are out in the street rioting. It's coming soon. I'd give it about another six weeks...whatever supplies you can get now, get 'em now," Duong told the undercover FBI agent as they left the old jail, according to the court record.

Duong appeared for the first time last Friday in federal court in DC. A judge released him from detention, after the Justice Department agreed he could be released, according to his court record.