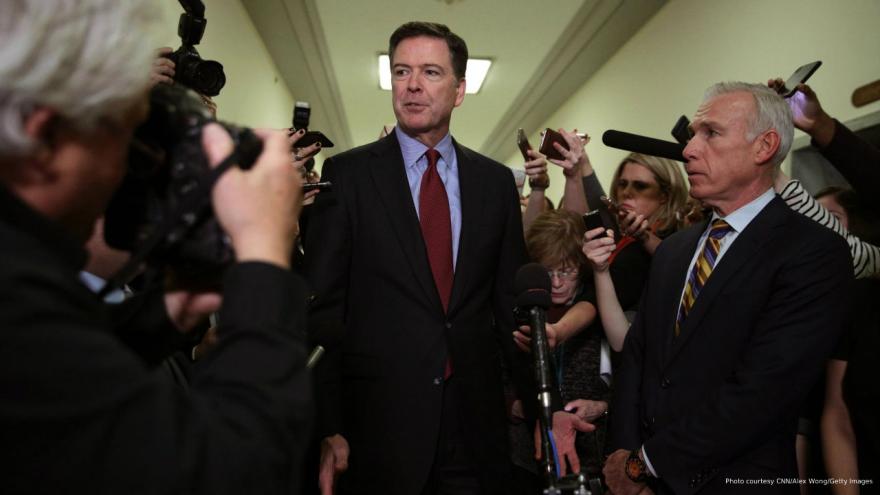 (CNN) -- The FBI on Friday released a redacted version of the memo that top intelligence officials, including former FBI Director James Comey, used to brief President Donald Trump about the compilation of information detailing his possible connections to Russia -- a document which came to be known as the Trump dossier.

The document was provided to CNN by the public records advocacy group James Madison Project, which, alongside Politico, had sued for it and received it from the FBI on Friday night following a judge's order.

The dossier, which was compiled by ex-British intelligence agent Christopher Steele, has been at the center of the political firestorm over probes into Russian interference in the 2016 election.

The investigations, including a special counsel probe, have looked into any potential ties between Trump campaign associates and the Kremlin. Trump has repeatedly denied any collusion.

"The source is an executive of a private business intelligence firm and a former employee of a friendly intelligence service who has been compensated for previous reporting over the past three years," the document said, not naming Steele. "The source maintains and collects information from a layered network of identified and unidentified subsources, some of which has been corroborated in the past. The source collected this information on behalf of private clients and was not compensated for it by the FBI."

The dossier and investigations have divided congressional committees down partisan lines, prompting a heated partisan debate that also focused on a foreign surveillance warrant on Trump campaign foreign policy adviser Carter Page, which has been the subject of criticism and questions over the FBI's tactics investigating members of the Trump campaign.

Conservative critics of special counsel Robert Mueller have argued that the FISA warrant on Page was tainted because it failed to disclose that the opposition research dossier on Trump and Russia was paid for by Democrats. They say that because the FISA warrant helped launch the FBI investigation into Trump and Russia, the whole investigation is tainted. Republicans are likely to note that the newly disclosed memo did not disclose the fact that the dossier was paid for by Democrats.

Democrats, however, say that the FISA warrant on Page was justified because of his contacts with Russia, and they argue that the FBI and Justice Department followed proper procedure in seeking and getting the Foreign Intelligence Surveillance Court to approve the warrant.

The FBI said it couldn't find records that would satisfy Politico and the James Madison Project's other freedom of information requests in the lawsuit; they had also asked the government to turn over investigative files and final determinations regarding the FBI's vetting of the dossier.