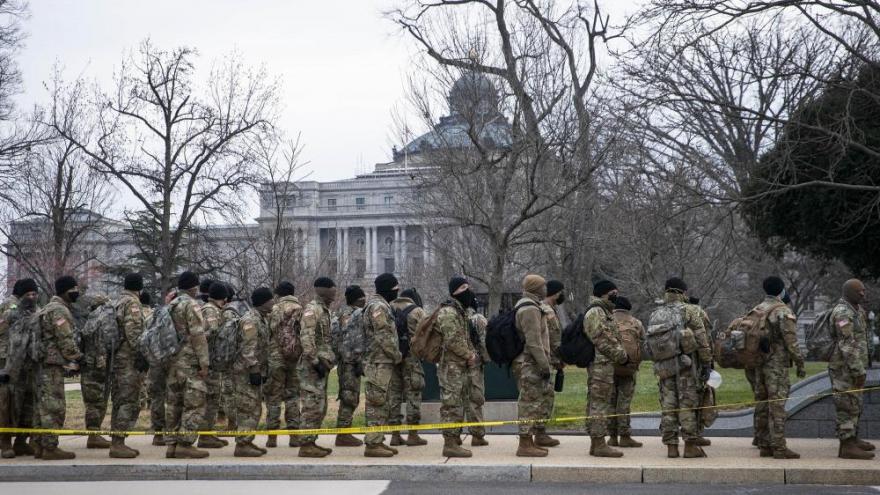 Members of the National Guard line up near the U.S. Capitol building in Washington, D.C. on Monday, January 11.

(CNN) -- The FBI has received information indicating "armed protests" are being planned at all 50 state capitols and the US Capitol in Washington, DC in the days leading up to President-elect Joe Biden's inauguration on January 20, according to an internal bulletin obtained by CNN.

The bulletin, which was circulated after rioters stormed the US Capitol last week, also suggests there are threats of an "uprising" if President Donald Trump is removed via the 25th Amendment before inauguration day.

"On 8 January, the FBI received information on an identified group calling for others to join them in 'storming' state, local and federal government courthouses and administrative buildings in the event POTUS is removed as President prior to Inauguration Day. This identified group is also planning to 'storm' government offices including in the District of Columbia and in every state, regardless of whether the states certified electoral votes for Biden or Trump, on 20 January," the bulletin adds.

Additionally, the FBI is tracking reports of "various threats to harm President-Elect Biden ahead of the presidential inauguration," the bulletin states.

ABC News was first to report the FBI bulletin.

Calls for new protests in Washington and states across the country have law enforcement bracing for more possible violence in the coming days after rioters stormed the US Capitol last week leaving five people dead, including a Capitol Police officer.

Authorities are preparing for additional personnel to help secure the nation's capital in the coming days. A Department of Homeland Security official told CNN that the breach of the Capitol will sharpen the response and planning for inauguration.

Washington Mayor Muriel Bowser on Monday urged Americans to avoid the city during Biden's inauguration next week and to participate virtually following last week's deadly domestic terror attack on the US Capitol.

Meanwhile, the National Guard has plans to have up to 15,000 National Guard troops to meet current and future requests for the inauguration, Gen. Daniel Hokanson, the chief of the National Guard Bureau, said Monday. The dramatic increase in troops comes as law enforcement in the nation's capital and around the country brace for further extremist violence amid the transition of power.

Speaking at a news conference Monday, Bowser, a Democrat, stressed that she was concerned about more violent actors potentially coming to the city in the run-up to the inauguration, saying, "If I'm scared of anything, it's for our democracy, because we have very extreme factions in our country that are armed and dangerous."