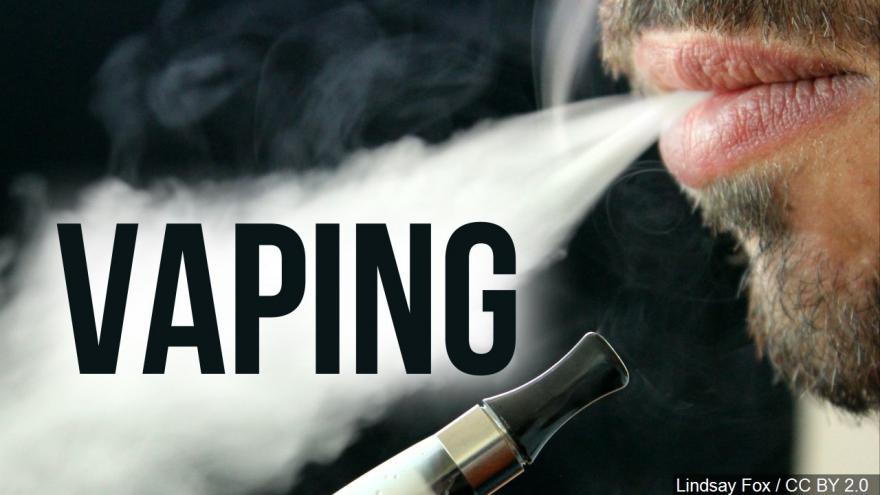 (CNN) -- After reports of seizures after vaping, the US Food and Drug Administration is alerting the public to a potential new risk and calling for people to come forward with cases the agency might not know about.

The FDA has identified 35 such cases of seizures -- particularly among younger users -- between 2010 and early 2019, it said in a statement Wednesday. The agency has also seen a "slight but noticeable increase in reports of seizures" since June.

The reports were submitted voluntarily, either to the FDA or to poison control centers. The agency stressed that it has not determined a definitive link between vaping and seizures, but there may be additional cases that could help it investigate.

Seizures are known to be a possible side effect of nicotine poisoning, the FDA said.

"We know that nicotine isn't a harmless substance, especially in the developing brains of our youth," FDA Commissioner Dr. Scott Gottlieb and Principal Deputy Commissioner Dr. Amy Abernethy said in the statement. "But we've also been clear that, even for adults, e-cigarettes are not risk free."

There is no clear pattern to the seizures: Some who had seizures were vaping for the first time, and some had been using these products for a while. The timing of the seizures also ranged from after a few puffs on an e-cigarette to a full day later. Several people had previously received a seizure diagnosis, and a few had also been using other drugs, like marijuana or amphetamines, before the seizures occurred.

The agency did not single out any brands. It urged people to report any issues through its Safety Reporting Portal with information such as the brand they were using, where it was purchased, whether it was altered in any way, whether it was used in combination with other drugs, what symptoms people had and when.

"E-cigarette use behaviors also vary and users may deliberately or inadvertently inhale more nicotine than would typically occur," Gottlieb and Abernethy said, adding that e-liquids "have varying levels of nicotine concentrations, and some e-cigarette design features may allow a user to obtain high levels of nicotine quickly."

A study in February looked at the rise of nicotine concentrations in vaping products over recent years, suggesting that leading e-cigarette company Juul Labs spurred a "widespread rush" of companies seeking to boost their own concentrations in order to mirror Juul's success.

"That may be a benefit to addicted adult smokers, but it also makes it potently addictive to nicotine-naive teenagers," study author Dr. Robert Jackler, founder of Stanford Research into the Impact of Tobacco Advertising, previously told CNN.

High nicotine concentrations can be manufactured using a "nicotine salt." By combining nicotine -- a bitter base in its natural form -- with an organic acid, vape manufacturers can mask nicotine's naturally unpleasant taste, create higher-concentration products and deliver nicotine to the brain quickly, experts say.

Juul has maintained that its products are intended to convert adult former smokers to what the company describes as a less-harmful alternative. It says it has taken steps to curb underage use, as well.

Brands like Juul come in small pods, but other e-liquids may come in larger bottles, which represents "a huge poisoning risk," Jackler said. Some bottles lack childproof caps and contain enough nicotine to kill an entire preschool class, he added.

The FDA is looking into additional possible health risks when it comes to vaping, including whether they may cause cancer in the airways down the line, according to the statement.

The announcement comes as use of the products is skyrocketing among youth. The FDA revealed in November that vaping had increased nearly 80% among high school students and 50% among middle school students since the year before. Experts worry that e-cigarettes could put kids' developing brains at risk, get them hooked on nicotine early in life and be a gateway to smoking and other drugs.

The agency has made a number of other moves in recent months to counter vaping among kids, including warning and fining retailers for illegally selling e-cig products to kids. The agency has also expanded its investigation into e-cigarette companies in an effort to uncover whether they are marketing products illegally and outside the agency's compliance policy.

In January, the agency held a public hearing to consider the role of drug therapies to get kids to quit vapes and other nicotine products, with medical organizations and vaping groups weighing in on how to address rising levels of e-cigarette use among youth.