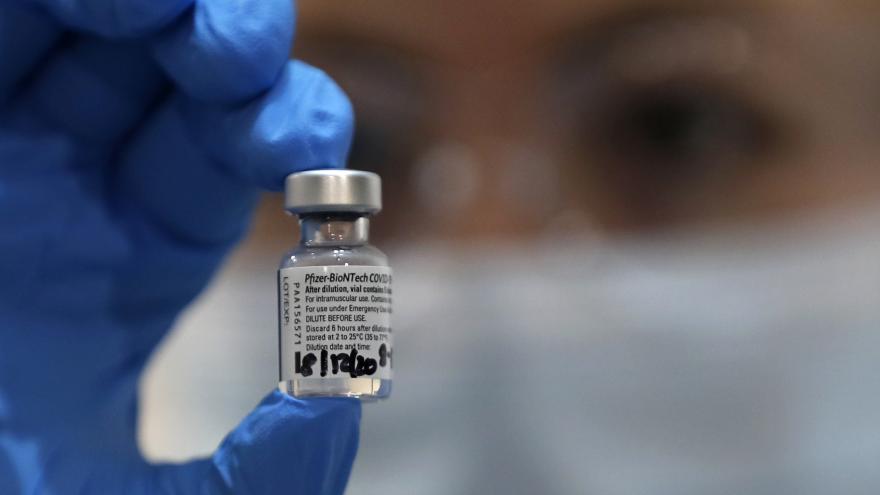 (CNN) -- The US Food and Drug Administration has authorized the first Covid-19 vaccine for emergency use in the United States. Millions of doses of the Pfizer and BioNTech coronavirus vaccine, which has been found to be 95% effective, will be soon shipped around the country so vaccinations can begin within days.

An emergency use authorization means what its name suggests: a medical product gets special authorization by the FDA to be used during an emergency -- but it is short of a full approval. Pfizer would have to file a separate application for its vaccine to be fully licensed by the FDA.

"The FDA's authorization for emergency use of the first COVID-19 vaccine is a significant milestone in battling this devastating pandemic that has affected so many families in the United States and around the world," FDA Commissioner Dr. Stephen Hahn said in a statement.

"Today's action follows an open and transparent review process that included input from independent scientific and public health experts and a thorough evaluation by the agency's career scientists to ensure this vaccine met FDA's rigorous, scientific standards for safety, effectiveness, and manufacturing quality needed to support emergency use authorization.

"The tireless work to develop a new vaccine to prevent this novel, serious, and life-threatening disease in an expedited timeframe after its emergence is a true testament to scientific innovation and public-private collaboration worldwide."

Before vaccinations can begin, a US Centers for Disease Control and Prevention immunization advisory committee still must vote to recommend the vaccine, and the CDC must accept that recommendation.

The Advisory Committee on Immunization Practices was scheduled to meet Saturday morning.

About 20 million people could be vaccinated in the next few weeks -- an important step toward ending the pandemic that has killed nearly 300,000 people in the United States.

But until many more are vaccinated, mitigation efforts such as wearing masks and keep a safe distance need to continue to stop the virus from spreading.

How the vaccine works

Pfizer and BioNTech's coronavirus vaccine, called BNT162b2, is an mRNA vaccine given as two shots administered 21 days apart. One dose is to prime the body, and then a few weeks later, the second dose is to boost the response.

The messenger RNA or mRNA used in the vaccine codes for a structure called the spike glycoprotein of the virus. That's the part of the virus that it uses to attach to cells. The vaccine prompts the human body to produce copies of that protein, eliciting an immune response that leads to some protection against coronavirus infection.

Such mRNA vaccines are the newest approach to vaccine technology.

Safety and efficacy data on Pfizer and BioNTech's Covid-19 vaccine candidate published in the New England Journal of Medicine on Thursday morning.

The paper notes that a two-dose regimen of the vaccine has an efficacy of 95% in people ages 16 and older. "BNT162b2 was 95% effective in preventing Covid-19," the paper's abstract notes. "Safety over a median of 2 months was similar to that of other viral vaccines."

However, FDA briefing documents also note that the vaccine appears to provide "some protection" against Covid-19 following just one dose.

The documents describe the efficacy of Pfizer's vaccine in the time between the first and second dose as 52.4%, but the document notes that "the efficacy observed after Dose 1 and before Dose 2, from a post-hoc analysis, cannot support a conclusion on the efficacy of a single dose of the vaccine, because the time of observation is limited by the fact that most of the participants received a second dose after three weeks."

In other words, "the trial did not have a single-dose arm to make an adequate comparison."

The document goes on to detail the safety profile of the vaccine as "favorable" and notes that the most common adverse reactions to the vaccine have been reactions at the injection site, fatigue, headache, muscle pain, chills, joint pain and fever.

Severe adverse reactions occurred in less than 4.6% of participants, were more frequent after the second dose and were generally less frequent in older adults as compared to younger participants, according to the document. The document adds that swollen lymph nodes also may be related to vaccination.

Overall, "there are currently insufficient data to make conclusions about the safety of the vaccine in subpopulations such as children less than 16 years of age, pregnant and lactating individuals, and immunocompromised individuals," according to the document.

In the advisory committee's Thursday meeting, FDA official Dr. Marion Gruber said the fact sheet and prescribing information provided with Pfizer's Covid-19 vaccine will warn that people with a history of severe allergic reactions to any of the vaccine's components should not get it.

In the United Kingdom, officials are investigating adverse responses that two health care workers with a significant history of severe allergic reactions experienced after receiving the vaccine.

As vaccine doses get distributed across the country, state and local officials will oversee the distribution of the vaccine in their states as well as the logistics -- and health care workers and residents of long-term care facilities are prioritized to receive the vaccine first.

At this point, the number of doses each state is getting in its first shipment is fluid and, in many cases, the amount is less than what states were initially told to expect, leading states to change distribution plans.

In most cases, the first shipments of the vaccine will be transported from Pfizer's facility in Kalamazoo, Michigan, to hospital systems and pharmacies.

The distribution from vaccine production company to individual hospitals and pharmacies in each state as directed by the federal government, is different for almost every state. State health department officials are coordinating with federal officials in Operation Warp Speed. However, there is no clear roadmap that explains how this process is working simultaneously in all 50 states.

Instead, states have developed individualized vaccine distribution plans that vary slightly for each individual state's demographic and geographic needs.

CDC officials have been in close contact with state leaders about how their distribution plans will work and challenges that could crop up state to state.