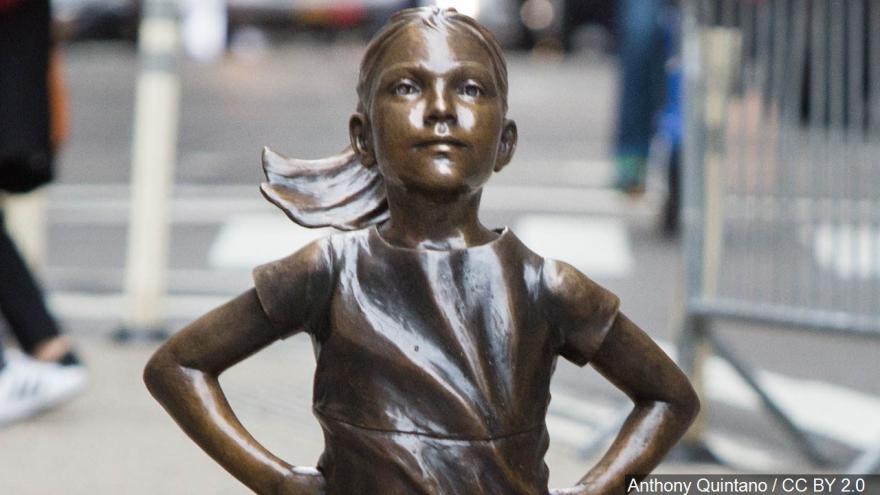 The bronze statue of a young girl standing with her hands on her hips has been relocated from Bowling Green Park, where she stood across the iconic "Charging Bull" for over a year, to a spot outside of the New York Stock Exchange.

"Now instead of staring down the bull, she's going to be staring down all of business," New York Congresswoman Carolyn Maloney said on Monday morning during an unveiling ceremony for the statue. "I'm delighted, absolutely delighted, that the Fearless Girl is getting a permanent home, right here in front of New York's own stock exchange."

"Fearless Girl," which was installed by the financial firm State Street Global Advisors in March 2017, was only supposed to stay in place for a few days. But New York decided to extend the statue's permit in response to the public's embrace.

Staring down the stock exchange will give the statue "a bigger stage ... where she can have an even greater impact," Lori Heinel, Deputy Global Chief Investment Officer for State Street Global Advisors, said on Monday.

"Fearless Girl" was commissioned by State Street to raise awareness of the firm's initiative to increase the number of women on corporate boards. Since the installation in March of last year more than 300 companies have added female directors, State Street said.

Fans see the statue as a symbol of empowerment and equality. When "Fearless Girl" was staring down the bull, they dressed her for poor weather and imitated her pose — chest forward, chin held high — to be photographed by her side. Crowding around the statue posed a safety risk and was a factor in the move, the city said.

A plaque has been placed where "Fearless Girl" used to be.

Betty Liu, executive vice chairman of the New York Stock Exchange, said on Monday that in her new location the statue will serve as an "inspiration to the millions of people who walk through this thoroughfare every single year."

In addition to her many fans, "Fearless Girl" also has her critics. Because "Fearless Girl" was commissioned by State Street, some see the statue as a glorified ad. "Charging Bull" sculptor Arturo Di Modica said "Fearless Girl" tarnishes the bull's positive message.

The New York mayor's office said in April that the statue's post outside of the stock exchange would be her "long-term" home.