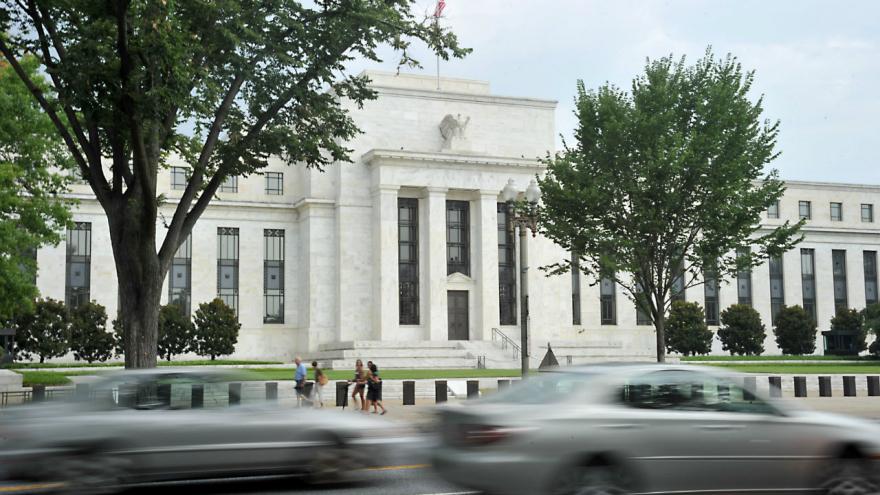 (CNN) -- The Federal Reserve on Wednesday held rates steady but raised the prospect for two potential rates cuts this year, as policy makers continue to weigh the right time to act amid concerns over President Donald Trump's trade policies.

Jerome Powell, the president's choice to run the world's most influential central bank, is facing considerable pressure to keep the US economy steady. Concerns are intensifying that Trump's tariff strategy may end up hurting global growth.

The decision also comes as Trump continues to criticize Powell, suggesting he might still be willing to try to demote the country's top central banker.

"I think the law is clear that I have a four-year term, and I fully intend to serve it." Powell said during a news conference on Wednesday.

Trump had told reporters that he would be watching "what he does" as the president left for his re-election kickoff rally on Tuesday.

Powell has repeatedly defended the independence of the Fed while under fire by Trump, and has argued the central bank is insulated from day-to-day political pressure.

He declined to push back on the President's criticism over the Fed's interest rate policy when asked at Wednesday's press conference.

The Fed voted to leave its benchmark rate hovering between 2.25% and 2.5% with only one objection by St. Louis Fed President James Bullard, marking the first dissent in Powell's chairmanship. Bullard had previously suggested a rate cut "may be warranted soon."

Fed officials are now split between whether to continue indefinitely holding rates level for the remainder of the year or to make at least one, if not two, potential rate cuts in the second half amid intensifying trade tensions that have shown signs of damage to the US economy. Eight out of the 17 officials were in favor of keeping rates the same.

During his press conference, Powell noted the jobs market is healthy, although the Fed is concerned about a few recent weak reports. The Fed predicts unemployment will remain low this year and next.

Consumer spending, which makes up about 70% of the US economy, remains strong. Yet Powell noted that "the risk of less favorable outcomes has risen" and uncertainty has "clearly" risen since the Fed's last meeting in May.

For the last several months, Powell has preached patience when it comes to rate-setting policy. But with increased uncertainty over on-again, off-again trade negotiations between China and the United States, the world's two largest economies, and the threat of tariffs on nearly all remaining Chinese goods, the Fed is now beginning to signal a more a nimble approach.

Powell noted business debt has increased and manufacturing has weakened, in part because of trade policy.

Analysts anticipated the Fed would punt on a rate cut this week until there was greater clarity of how trade talks between the United States and China would unfold. Trump announced on Tuesday he and Chinese President Xi Jinping would hold an "extended meeting" later this month at the Group of 20 leaders summit in Osaka, Japan, and negotiators would resume talks.

Officials in their statement noted that risks to growth had increased amid "uncertainties," and reaffirmed that they would move as needed to continue the US economy's expansion.

"In light of these uncertainties and muted inflation pressures, the committee will closely monitor the implications of incoming information for the economic outlook and will act as appropriate to sustain the expansion," the Federal Open Market Committee said in its statement.

The expected shift echoed a similar message made by Powell weeks earlier in Chicago when he spelled out to investors that the Fed was prepared to respond if the Trump administration's trade strategy ends up threatening the American economy.

"We are closely monitoring the implications of these developments for the US economic outlook and, as always, we will act as appropriate to sustain the expansion," Powell said speaking at a Fed conference.

Those comments have helped to fuel expectations that the Fed may cut rates at least once, if not more, before the end of the year due to the trade war.

Seven out of the 17 participants on the Fed's policy-making board now anticipate that two rate cuts may be necessary this year with one member estimating a single rate cut may be sufficient to keep the economy humming.

June's updated forecast is a significant downward shift since the projections were last updated in March.

At the time, the Fed had effectively put a pause on lifting interest rates with 11 out of 17 participants in favor of being patient until the central bank had a better handle on where the economy is going for the rest of the year.