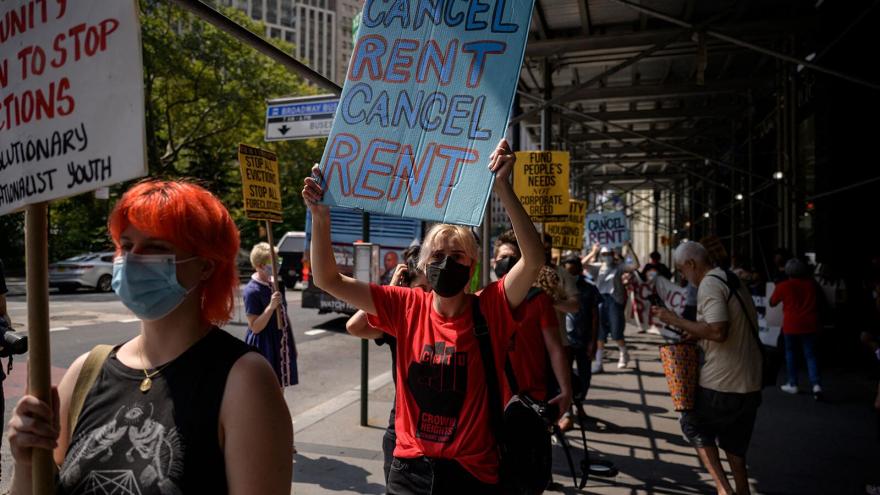 The Biden administration's latest eviction moratorium will continue, a federal appeals court ruled Friday. Demonstrators here call for an extension of the state's eviction ban until 2022 in New York city on August 11.

(CNN) -- The landlords who are challenging the Biden administration's eviction moratorium asked the Supreme Court on Friday to block it.

The request was filed Friday evening with Chief Justice John Roberts, who oversees matters arising from the circuit court where the litigation is playing out. Earlier Friday, the US Court of Appeals for the DC Circuit left in place a previous court order that has allowed the moratorium to continue.

This is the second time the Supreme Court has been asked to weigh in on a moratorium put in place by the US Centers for Disease Control and Prevention. The Supreme Court declined to block an earlier moratorium in June when the landlords requested the court's intervention, but the justices may be more inclined to halt the current version.

The latest moratorium was announced by the CDC earlier this month, days after the administration allowed a previous freeze on evictions to expire on July 31. Before the new moratorium -- which applies to areas of the country with high or substantial transmission of Covid-19 -- was announced, several top Biden administration officials said they did not think it would be upheld by the Supreme Court but were willing to try it.

"It will probably give some additional time while we're getting that $45 billion out to people who are, in fact, behind in the rent and don't have the money," he told reporters.

When the Supreme Court considered the earlier moratorium in June, it voted 5-4 against blocking it. But Justice Brett Kavanaugh, a swing vote at the time in favor of the moratorium, indicated he would vote to block the moratorium if it were extended beyond its July 31 expiration date.

In this most recent phase of the litigation, the landlord groups pointed to Kavanaugh's concurring opinion to argue that the DC Circuit should reverse an order it handed down in June that let the moratorium continue.

Last week, US District Judge Dabney Friedrich said she couldn't block the moratorium because of that previous order, even as she had major doubts about the moratorium's legality.

In their filing with the Supreme Court, the landlords said that the Biden administration's "gamesmanship has paid off so far."

"In light of the Executive Branch's statement that its litigation efforts are designed to buy time to achieve its economic policy goals—and the fact that landlords are now subject to federal criminal penalties for exercising their property rights depending on where they do business—applicants respectfully ask this Court to issue relief as soon as possible," the landlords wrote.

Shortly after the landlords' request was filed with the chief justice, the Supreme Court asked that the Biden administration to respond by noon on Monday.

This story and headline have been updated with the landlords' request to the Supreme Court.