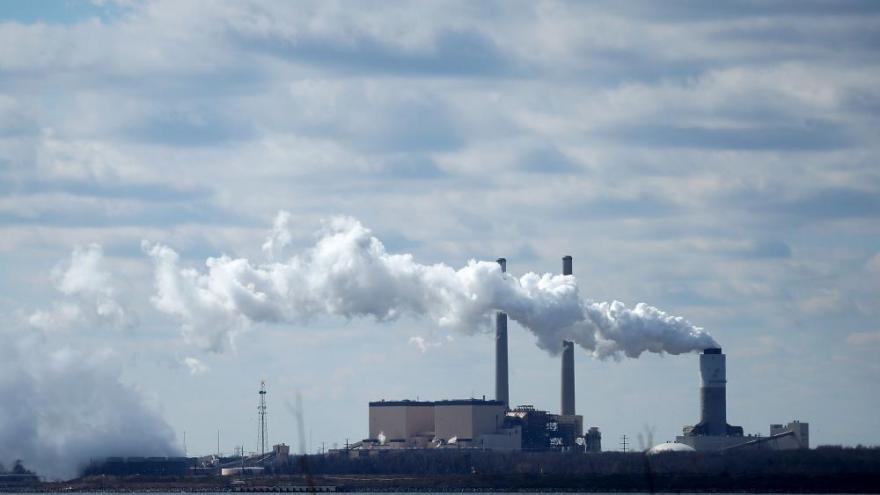 Emissions spew from a large stack at the coal-fired Brandon Shores Power Plant in Baltimore, Maryland.

(CNN) -- A federal appellate court has ruled the Biden administration can once again factor the cost of greenhouse gas emissions into its decision-making on oil and gas leases and other environmental regulations.

On Wednesday, the 5th US Circuit Court of Appeals stayed a Louisiana federal judge's injunction that prevented the Biden administration from using a metric estimating the societal cost of carbon emissions in its federal climate and environmental regulations.

The administration can now use what's known as the "social cost of carbon" in decisions around oil and gas drilling on public land or in rules governing fossil fuel emissions.

Biden's administration had been expected to update the figure in February but was blocked by the earlier ruling.

Ten Republican-led states brought the lawsuit against the Biden administration. In the February ruling blocking the metric, US District Judge James Cain of the Western District of Louisiana sided with the states, saying the administration's carbon cost estimate "will significantly drive up costs" while decreasing state revenue.

"The government defendants are likely to succeed on the merits because the plaintiffs states lack standing," the appellate ruling states, adding that the arguments of Republican attorneys general that their states were injured by the metric were "purely hypothetical."

The Biden administration, meanwhile, has "shown they will be irreparably harmed absent a stay," the court wrote. "The preliminary injunction halts the President's directive to agencies in how to make agency decisions, before they make those decisions."

The previous injunction blocking the metric had delayed several rule makings in the administration as well as decisions on upcoming oil and gas leases on federal lands.

Hana Vizcarra, a senior attorney for Earthjustice, said the appellate court's decision "sent a strong message that the rule of law cannot be short-circuited to score political victories."

"It puts the government back on track to address and assess climate change," Vizcarra added.