Federal appeals court to hear arguments on future of DACA 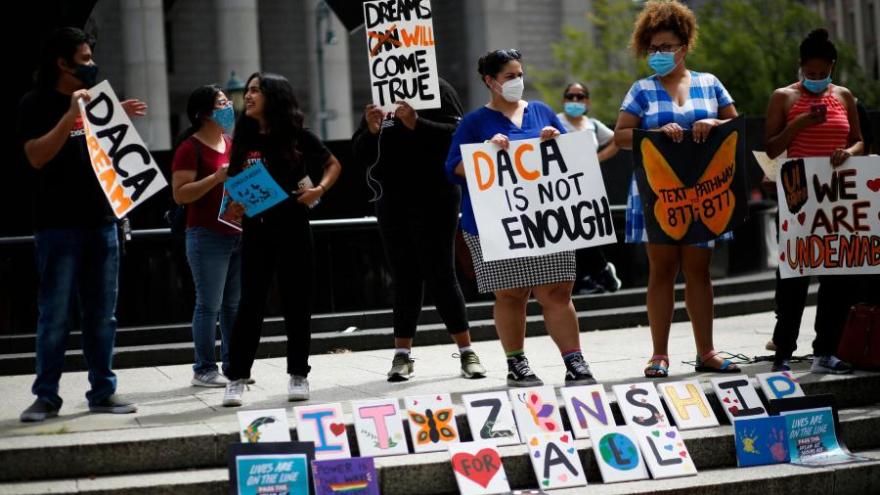 A federal appeals court in New Orleans will hear arguments July 6 on the legality of the Obama-era Deferred Action for Childhood Arrivals program, setting up another high-stakes legal clash over immigration.

(CNN) -- A federal appeals court in New Orleans will hear arguments Wednesday on the legality of the Obama-era Deferred Action for Childhood Arrivals program, setting up another high-stakes legal clash over immigration that could impact hundreds of thousands of people.

DACA, created in 2012, was intended to provide temporary reprieve to undocumented immigrants who were brought to the United States as children, a group often described as "Dreamers." Many of those are now adults.

There are more than 611,000 immigrants enrolled in the program, according to US Citizenship and Immigration Services. The case before the 5th US Circuit Court of Appeals Wednesday could impact hundreds of thousands of immigrants who rely on the program as well as those who might benefit.

A decade since the program was established, DACA is still one of the only signs of potential relief for undocumented immigrants looking to remain and work in the US -- and it remains in legal limbo.

The Center for American Progress estimated last year that more than 1.3 million people in the United States live with a DACA recipient.

But Texas -- in its lawsuit originally brought along with Alabama, Arkansas, Louisiana, Nebraska, South Carolina, and West Virginia -- argues that the program placed an undue burden on the states and amounted to executive overreach.

Last July, Judge Andrew Hanen, of the Southern District of Texas, ruled that DACA was unlawful and blocked the government from approving new applications for the program. Hanen's order, however, allowed the program to continue for current enrollees while the case is litigated.

Following Hanen's ruling, Homeland Security Secretary Alejandro Mayorkas said the department would engage in a public rulemaking process "to preserve and fortify DACA." Since the ruling, a proposed DACA regulation has been submitted to the Office of Management and Budget and a final regulation is expected to be released in August.

The Justice Department later filed a notice to appeal Hanen's ruling, kicking off the appeals process in the 5th Circuit, a conservative-leaning appeals court. The Mexican American Legal Defense and Educational Fund, which is representing a group of DACA recipients who are defending the program, also appealed.

There are three issues at hand Wednesday, according to MALDEF President and General Counsel Thomas Saenz: standing, meaning whether Texas has proven injury from DACA and has the right to challenge the policy; that the Obama administration didn't follow proper procedures in implementing DACA; and the legality of the program.

The Supreme Court restricted the authority that lower courts have to block the implementation of certain immigration policies alleged to be unlawful. In Garland v. Gonzales, the 6-3 conservative majority said lower courts could not offer class wide relief in such cases -- which concern policies having to with arrest, detention and removal of immigrants.

The holding suggested that from now on, in cases concerning those types of policies, lower courts can grant relief that affects individual challengers but won't be allowed to issue orders that broadly bar immigration officials from carrying out certain practices. The Justice Department argued that holding is in its favor here.

While it is unclear whether this case will end up before the Supreme Court, three justices signaled in a previous dissent their belief that the program is unlawful. The full court has not yet weighed in on DACA's legality.