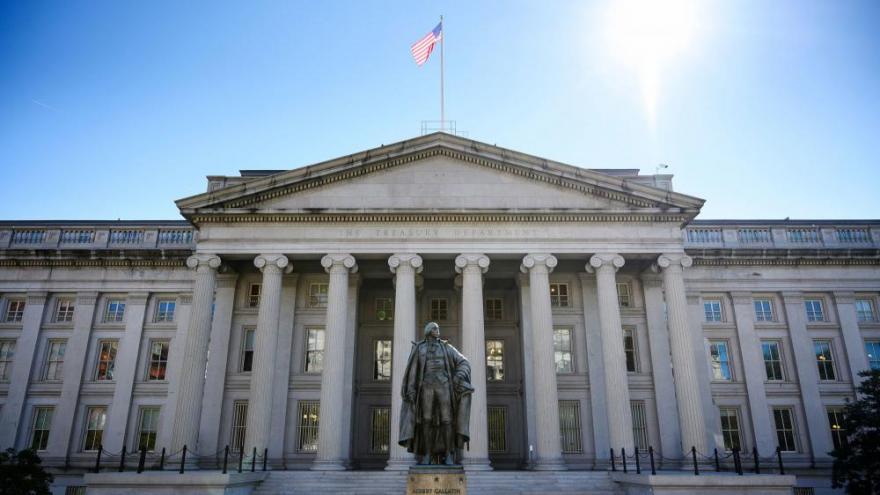 An October 18, 2018, photo shows the US Treasury Department building in Washington, DC. The federal government budget deficit surpassed $1 trillion in 2019, marking the first time the country has crossed that threshold in a calendar year since 2012.

(CNN) -- The federal government budget deficit surpassed $1 trillion in 2019, marking the first time the country has crossed that threshold in a calendar year since 2012.

The budget deficit reached $1.02 trillion for the 12-month calendar year ending in December, according to data released by the Treasury Department on Monday

And the gap appears to be widening. For the first quarter of fiscal year 2020, which began on October 1, the deficit grew 12% over last year.

The deficit -- the gap between how much the government spends versus how much it takes in -- increased to $357 billion in the first three months of the fiscal year as military spending and health care costs continued to eclipse federal tax receipts. The shortfall stood at $319 billion for the same period in fiscal 2019.

Federal spending rose 7% to $1.16 trillion between October and December, while federal tax receipts increased 5% to $807 billion. That includes $21.1 billion collected from tariffs paid by importers.

The country's deficit has continued to balloon due in part to tax cuts and a two-year budget deal that has boosted federal spending under President Donald Trump. It's swelled to $984 billion at the end of the last fiscal year, up from $665 billion during his first year in office in 2017.

The widening gap comes despite campaign promises by Trump to shrink or even eliminate the nation's deficit.

Usually, big budget deficits typically widen during economic downturns -- but the US economy is expanding and unemployment is at a 50-year low.