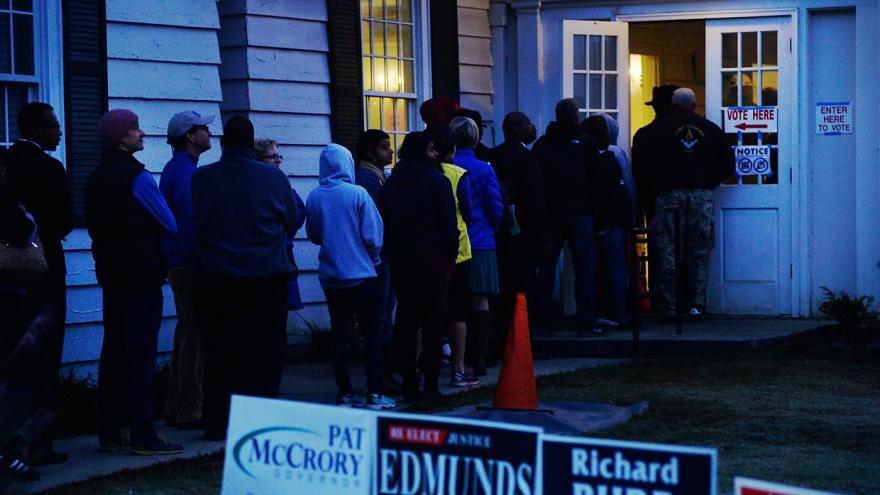 A federal court has announced that it plans to temporarily block North Carolina's voter ID requirements that were set to go into effect in 2020.

(CNN) -- A federal court has announced that it plans to temporarily block North Carolina's voter ID requirements that were set to go into effect in 2020.

The announcement, which came only as a short note Thursday, indicated that the order explaining the decision would come down next week.

The preliminary injunction means that a photo ID requirement will not be in effect for the state's primary in March, absent a successful appeal.

The reason given for the advance notice was that a statewide informational mailing on the new requirements was set to go out Tuesday. The North Carolina State Board of Elections has now stopped printing several million of those mailers, spokesperson Patrick Gannon told CNN.

The president of the North Carolina NAACP chapter, the Rev. T. Anthony Spearman, said during a news conference Friday that the group is "overjoyed that the federal court will intervene to halt this illegal photo ID" law. He called the law "the latest bad faith attempt in a string of failed efforts by the North Carolina General Assembly to impede the right to vote of African Americans and Latinos in this state."

The North Carolina Republican Party on Friday called on the state attorney general, Democrat Josh Stein, to appeal the decision.

"Unfortunately, this preliminary injunction is yet another example of judges legislating from the bench," Jeff Hauser, the communications director for the state's Republican Party, said in a statement. "This action, if it is allowed to stand, will invalidate the votes of millions of North Carolinians who voted overwhelmingly to implement voter ID and strengthen the integrity of N.C. elections."

Stein's office said it plans to review the court's decision once it's released and then determine next steps, Laura Brewer, the communications director for the attorney general's office, told CNN.

In a tweet, North Carolina Republican Lt. Gov. Dan Forest called on Democratic Gov. Roy Cooper and the State Board of Elections to appeal the ruling.

Asked if the board planned to take a position on a possible appeal, Gannon told CNN that the board was "waiting for the actual injunction" and "can't comment" until members have read the judge's order.

In 2013, North Carolina lawmakers passed a measure requiring residents to present photo identification to vote, but critics slammed it as an effort to disenfranchise poor and minority voters and those with disabilities.

Conservatives had pushed the photo ID requirement, saying it would prevent vote fraud, although studies of recent elections show in-person voter fraud to be very rare.

A federal appeals court in 2016 overturned parts of the North Carolina law, including the provision that required voters to show photo ID cards, saying the provisions "target African-Americans with almost surgical precision" and "impose cures for problems that did not exist."

About 55% of North Carolinians voted in 2018 to approve a state constitutional amendment that would require photo ID to vote. The Legislature then finalized legislation that laid out how the amendment would be implemented, according to CNN affiliate WTVD.

Cooper vetoed the bill in December 2018, charging that it was "designed to suppress the rights of minority, poor and elderly voters."

"The cost of disenfranchising those voters or any citizens is too high, and the risk of taking away the fundamental right to vote is too great, for this law to take effect," he said in a statement.

Spearman said Friday that he was given one of the informational mailers already sent to households in certain counties. During his news conference, he balled up the mailer in his hand, tossed it and encouraged the crowd to do the same.

"Once again, we're battling for the soul of our democracy as a nation. And in this state, it is incumbent upon us to ensure that the right to vote is fair and free from racial discrimination," Spearman said.