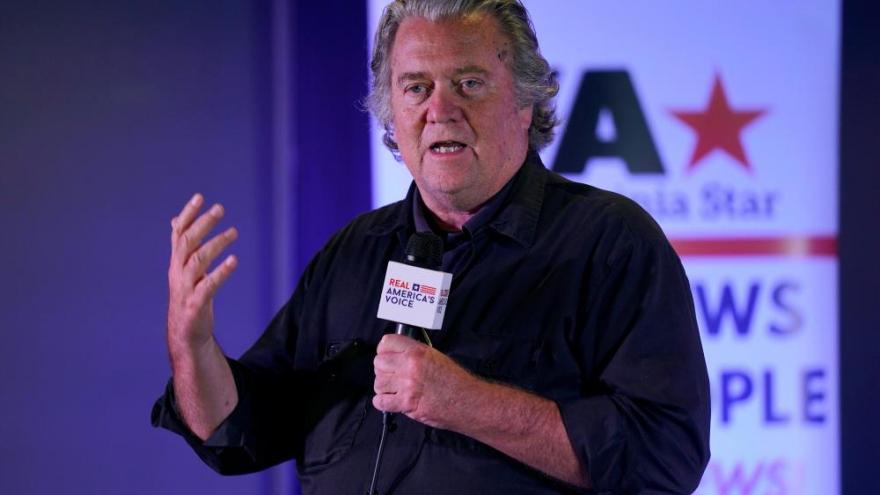 A federal grand jury has returned an indictment against former Trump adviser Steve Bannon for contempt of Congress, the Justice Department announced Friday.

Attorney General Merrick Garland had been under tremendous political pressure to indict Bannon since the House referred the Trump ally to the Justice Department for contempt on October 21.

"Since my first day in office, I have promised Justice Department employees that together we would show the American people by word and deed that the Department adheres to the rule of law, follows the facts and the law, and pursues equal justice under the law," Garland said in a statement Friday. "Today's charges reflect the Department's steadfast commitment to these principles."

A prosecutor with the US attorney's office presented evidence to the grand jury on Friday, CNN was able to confirm. Prosecutors on Friday afternoon presented an indictment and arrest warrant to federal Magistrate Judge Robin M. Meriweather.

The judge signed the warrant for an indicted defendant with the initials "SB," according to CNN reporters in the courtroom. A source familiar with the matter confirmed SB was Steve Bannon. Soon after, the Justice Department announced that Bannon had been indicted.

Without an indictment, critics have said, there's doubt over how much power the House January 6 select committee would have to compel cooperation from former White House and Trump administration officials. On Friday, former White House chief of staff Mark Meadows failed to appear for a deposition, sources familiar with the investigation told CNN, setting up a potential showdown that could lead to the panel beginning a criminal referral process against him as well.

And last week, former Trump Justice Department official Jeffrey Clark, who had been subpoenaed, appeared before the committee for more than an hour but declined to answer questions.

"The grand jury was presented with overwhelming and irrefutable evidence of Steve Bannon's violation of a congressional subpoena," Rep. Jamie Raskin, a Maryland Democrat who serves on the House select committee, told CNN.

"The justice system of the United States is not going to tolerate these contemptuous violations of the rule of law," he added.

Bannon did not immediately respond to a request for comment. He is expected to self-surrender on Monday and appear in court Monday afternoon, according a source familiar with the matter. The case has been referred to District Judge Carl Nichols, who was appointed by Trump.

The House January 6 committee subpoenaed documents and testimony from Bannon in early October.

President Joe Biden's White House has declined to assert executive privilege regarding witnesses and documents related to January 6, citing the extraordinary nature of the attack on the Capitol. The White House counsel's office has written to Bannon's attorney to tell him it won't support his refusals to testify.

The White House declined to comment on Friday's indictment.

In seeking his cooperation, the committee has pointed to reports that Bannon spoke to Trump in the lead-up to the Capitol riot, that he was present in the so-called war room of Trump allies at the Willard hotel in Washington as the attack was unfolding and that he made comments on his podcast the previous day predicting that "all hell" was "going to break loose" the next day.

"In short, Mr. Bannon appears to have played a multi-faceted role in the events of January 6th, and the American people are entitled to hear his first-hand testimony regarding his actions," the House committee said in its report putting forward a contempt resolution against Bannon.

Legal experts also have expressed skepticism about Bannon's decision not to comply with the subpoena, given that the question of whether Trump as a former President can assert privilege is unsettled and that Bannon was not working for the government in the period being examined by the committee.

The criminal case against Bannon could take years to unfold in court, and a successful prosecution isn't a certainty. Historically, criminal contempt of Congress cases have been derailed by juries sympathetic to the defendants and by appeals rulings. Bannon's case is likely to raise novel legal questions about executive privilege and about the House's ability to enforce its investigative subpoenas when it seeks information about the executive branch.

The House has pinned its hopes on the prosecution of Bannon as well, with the committee trying to make him an example of the possible consequences for uncooperative witnesses.

"If his defiance persists and that process moves ahead, the record will reveal the wide range of matters the Select Committee wished to discuss with Mr. Meadows until his decision to hide behind the former President's spurious claims of privilege," the lawmakers said.

Inside the DOJ's decision-making

Despite pressure from lawmakers and liberal legal experts who view the Bannon prosecution as an easy case to make, Justice Department officials didn't view it as so simple, according to people briefed on the internal deliberations.

Cases like Bannon's are rare, with the last one dating back to the Reagan administration.

More often, the Justice Department declines to bring cases when Congress is demanding criminal charges against a member of the administration who is refusing to comply with Congress' demands at the orders of the sitting president.

The Justice Department's Office of Legal Counsel was consulted on the novel circumstances presented because of the former President's claim of executive privilege despite Biden's decision to waive privilege due to the extraordinary events of January 6.

For decades, the Office of Legal Counsel guidance has served to shield current and former officials from complying with congressional subpoenas when a president asserts privilege. The Justice Department also has held that even people outside government -- Bannon is a podcaster and was not working in government at the time of January 6 -- could be counted as advisers to a president.

The Justice Department declined to release any internal legal guidance that supported the Bannon decision, but elements of the current administration's legal position can be seen in court documents filed by the National Archives, which argues that the current president has ultimate say over what is protected by privilege.

The decision to charge Bannon was made by career prosecutors, and supported by the attorney general, according to a person familiar with the matter.

This story has been updated with additional reporting Friday.