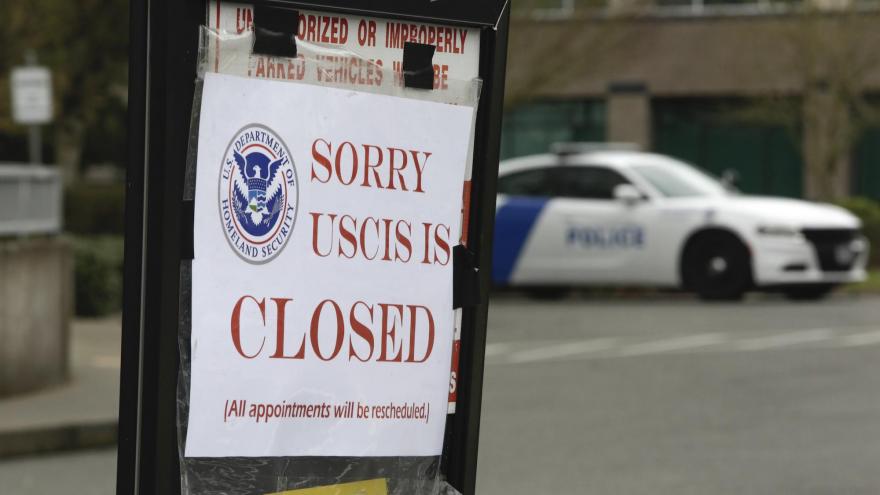 US Citizenship and Immigration Services, the federal agency responsible for visa and asylum processing, is expected to furlough part of its workforce this summer if Congress doesn't provide emergency funding to sustain operations during the coronavirus pandemic.

(CNN) -- US Citizenship and Immigration Services, the federal agency responsible for visa and asylum processing, is expected to furlough part of its workforce this summer if Congress doesn't provide emergency funding to sustain operations during the coronavirus pandemic.

"Unfortunately, as of now, without congressional intervention, the agency will need to administratively furlough a portion of our employees on approximately July 20," USCIS Deputy Director for Policy Joseph Edlow wrote in a letter sent to the workforce on Tuesday.

Earlier this month, the agency -- which has 19,000 government employees and contractors working at more than 200 offices -- requested $1.2 billion from Congress due to its budget shortfall.

Since then, the agency, a component of the Department of Homeland Security, has been working with members of Congress and their staffs to educate Capitol Hill on the agency's finances and operations.

Communications from the agency to Congress have grown more urgent as the threat of potential rolling furloughs could number in the thousands, according to one source familiar with the discussions.

The goal would be to attach the needed funds to the next coronavirus relief bill, which lawmakers plan to negotiate next. Still, with both parties far apart on any resolution, there is currently no clear pathway for lawmakers to fulfill the emergency request.

The immigration agency is primarily fee-funded and typically continues most operations during lapses in funding, such as last year's government shutdown. However, during the pandemic the agency suspended its in-person services, including all interviews and naturalization ceremonies.

"Due to the COVID-19 pandemic, USCIS has seen a dramatic decrease in revenue and is seeking a one-time emergency request for funding to ensure we can carry out our mission of administering our nation's lawful immigration system, safeguarding its integrity, and protecting the American people," said a USCIS spokesperson.

The agency proposed a 10% surcharge on USCIS application fees to reimburse taxpayers at a later time. USCIS previously estimated that application and petition receipts will drop by approximately 61% through the end of fiscal year 2020, exhausting funding this summer, according to the agency.

Sarah Pierce, a policy analyst for the US Immigration Policy Program at the Migration Policy Institute, told CNN earlier this month that USCIS' depleted funds are the "inevitable result" of the administration's policies, which decreased the number of petitions -- and thus fees -- received by the agency.

"Between the end of fiscal years 2017 and 2019, USCIS received nearly 900,000 fewer petitions. This decrease was largely driven by the administration's own decisions, such as ending Temporary Protected Status for nationals of several countries or drastically decreasing the number of refugees admitted to the United States," she said.

The furlough announcement comes as the agency is preparing to resume in-office operations and open its offices to the public.

"While it may seem somewhat at odds to do so given the possible suspensions in operations, we must be ready in the event of funding from Congress," Edlow wrote.

USCIS notified the agency's union of the potential furloughs Tuesday.

In an announcement to the workforce earlier this month, USCIS said it would begin its initial phase for resuming in-office operations and reopening as early June 4.

According to the announcement, measures to make the workplace safe for employees will include physical barriers to aid in socially distancing, limiting how many people are permitted in an office at any given time and requiring face coverings.