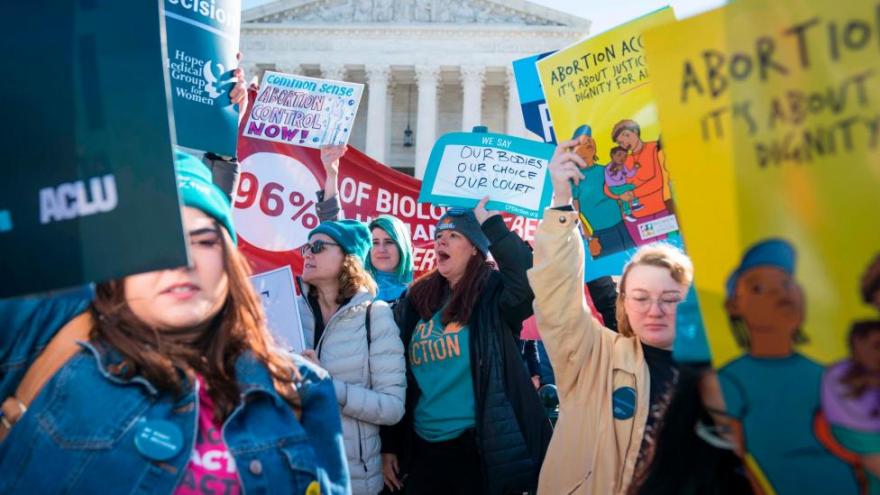 A federal judge has temporarily blocked an Arkansas order that would have limited abortion access in light of the coronavirus outbreak -- another instance of the courts siding with abortion rights advocates over state officials calling to preserve medical resources.

(CNN) -- A federal judge has temporarily blocked an Arkansas order that would have limited abortion access in light of the coronavirus outbreak -- another instance of the courts siding with abortion rights advocates over state officials calling to preserve medical resources.

The abortion rights advocates "are likely to prevail on their argument that the Challenged Provisions unconstitutionally restrict pre-viability abortions and, therefore, are facially unconstitutional," federal judge Kristine Baker wrote on Tuesday.

Arkansas abortion providers and the American Civil Liberties Union filed the challenge on Monday over an Arkansas Department of Health order dictating that procedures "that can be safely postponed shall be rescheduled to an appropriate future date" except for instances to prevent the death, permanent physical damage or disease advancement of a patient.

Baker pointed to the limits of medication abortion, a nonsurgical procedure that typically involves taking two pills and is effective until about 10 weeks into a pregnancy, in assessing the state's order.

The move comes as states continue to file federal challenges against similar orders, part of efforts to combat growing coronavirus casualties, that look to limit abortion access. Earlier on Tuesday, state abortion providers in Tennessee and Louisiana joined with national abortion rights groups to challenge similar orders in their states.

Arkansas Attorney General Leslie Rutledge's office had specified that the order applies to "any type of abortion that is not immediately medically necessary to preserve the life or health of the mother," with Rutledge last week promising "decisive action" for those found to violate the order.

"Rutledge is extremely disappointed in today's decision," Priest said, which the attorney general called a move to "blatantly disregard good public health guidelines and temporarily halt the Health Department's directive without allowing the State to be heard."

Plaintiffs cheered the ruling. "With this order, the court has ensured essential, time-sensitive health care can continue, and rebuffed Arkansas' attempts to restrict access to abortion," said Ruth Harlow, a senior staff attorney at the ACLU Reproductive Freedom Project.

The Arkansas providers followed those in Texas, Ohio, Alabama and Oklahoma that have brought similar lawsuits.

Initially, federal judges have in all four states temporarily blocked the bans, but the results in higher courts have varied widely. While earlier this month an appeals court affirmed the lower court's ruling blocking Ohio's order, plaintiffs in the Texas case previously petitioned the case to the Supreme Court following four back-and-forth orders from federal and appeals courts.

That petition was withdrawn on Tuesday after an appeals court ruled to allow medication abortions as well as abortions for abortion seekers that would be past the legal limit for an abortion in Texas on April 22, the day after the state's order is set to expire.