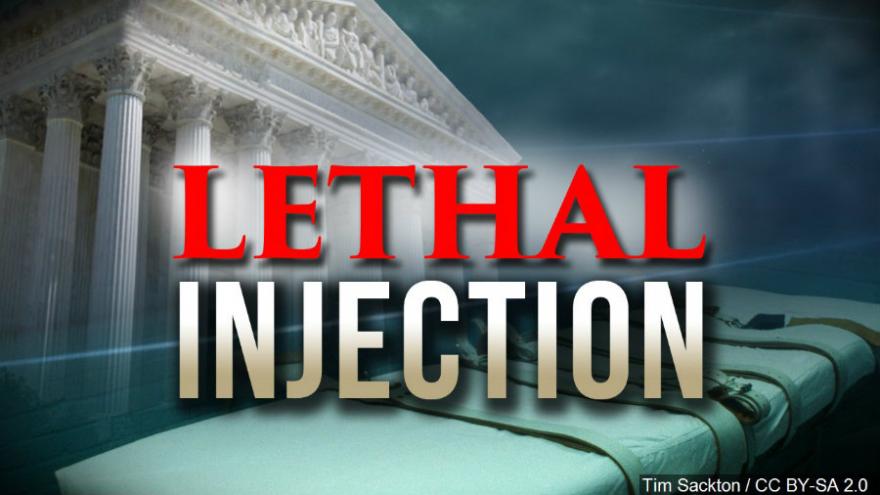 NASHVILLE, Tenn. (AP) — A federal judge on Thursday ordered the state of Tennessee not to proceed with plans to execute Edmund Zagorski by lethal injection after it refused his request to die in the electric chair.

Zagorski had asked to be executed by electrocution because he said the three-drug cocktail the state used constituted cruel and unusual punishment and violated his constitutional rights.

However, the state denied that request, arguing Zagorski waited too long to ask for the electric chair. Trauger disagreed with the state.

"There are serious questions in this case concerning whether the lethal injection protocol with which the state intends to execute the plaintiff is more or less humane than electrocution, which is his preferred method and which was the statutory method of execution at the time he was sentenced and still seems to be available to him as a matter of state law," Trauger wrote.

Tennessee is one of only nine states that allow electrocutions. The last electrocution in the U.S. took place in Virginia in January 2013.

Trauger's decision is the latest development in the multiple legal challenges surrounding the Tennessee death row inmate whose scheduled Thursday evening execution has been temporarily halted by a separate court order. In total, three separate legal challenging are circling Zagorski's execution — creating a potentially chaotic day in the buildup to the pending execution.

"Tennessee's death penalty statute makes it clear that Mr. Zagorski has the right to choose execution by electrocution," said Kelley Henry, one of Zagorski's attorneys, in a statement. "While being burned alive and mutilated via electricity is not a good death, Mr. Zagorski knows that death by electric chair will be much quicker than lethal injection using midazolam, a paralytic, and potassium chloride."

A spokeswoman for the Attorney General's office did not immediately return a request from The Associated Press for comment in response to Judge Trauger's ruling.

Zagorski had been scheduled to be executed 7 p.m. Thursday until the 6th U.S. Circuit Court of Appeals issued a stay Wednesday over questions of whether Zagorski had adequate representation.

In return, the state has asked the U.S. Supreme Court to vacate the decision in order to allow for Zagorski's execution to take place.

"The Sixth Circuit's order disregards the improbable odds of respondent's likelihood of success on the merits and the state's significant interest in enforcing its criminal judgments, and flatly contravenes the well-settled principle that a prisoner seeking a stay of execution must demonstrate a likelihood of success on the merits," wrote Tennessee Attorney General Herbert H. Slatery III in their motion to the Supreme Court.

Yet even if the Supreme Court overturns the federal appeals court decision, a separate motion is concurrently before the high court also asking for a delay over claims the state's lethal injection method is constitutional.

That means even if the justices overturn the federal appeals court decision regarding proper representation, the court still has the opportunity to halt the execution over lethal injection concerns.

Zagorski was sentenced in 1984 in the slayings of two men during a drug deal. Prosecutors said Zagorski shot John Dotson and Jimmy Porter, then slit their throats after robbing them in Robertson County in April 1983. The victims had planned to buy marijuana from Zagorski.

As of midday Thursday, media witnesses to Zagorski's execution — which include an AP reporter — had not been notified of any changes by the Tennessee Department of Correction and were still under instructions to attend the execution as planned.