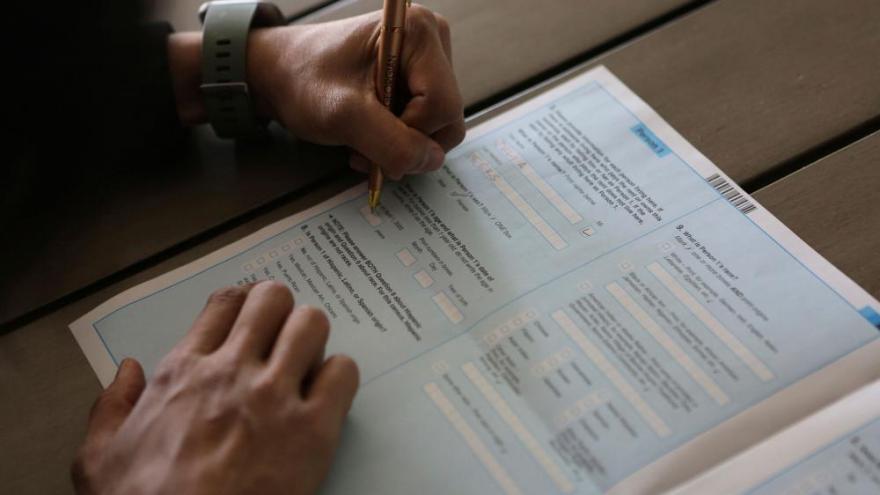 (CNN) -- A federal judge in California ruled late Thursday night that national counting for the 2020 census can continue through October 31.

The judgment, which the Trump administration is appealing, is the latest twist in what's become a long-running political dispute over the survey, which is used to allocate seats in Congress. The Trump administration has exerted unprecedented political influence over the survey in ways that critics say will advantage Republicans in upcoming elections, including by rushing the process and seeking to exclude undocumented immigrants.

Thursday's ruling is in regard to a shifting deadline prompted by the coronavirus. Last spring, the census deadline was extended until October 31 and the deadline for reporting totals to the President was extended to April 2021 by the US Census Bureau after data collection had to be halted due to the pandemic.

But last month, Commerce Secretary Wilbur Ross abruptly announced changes to the updated plan, shortening the counting deadline to September 30 and set December 31 as the deadline for reporting totals to the President.

In her ruling Thursday, US District Judge Lucy Koh, who was appointed by President Barack Obama, issued a preliminary injunction preventing the Census Bureau's deadlines announced in August from going into effect.

Los Angeles' City Attorney Mike Feuer said the injunction was a major win for a more accurate Census count in a statement released after the stay was issued. He also said he feels the Trump administration caused the abbreviated deadline.

"The court saw through the Trump administration's efforts to camouflage its political interference in what is supposed to be the neutral, nonpartisan process of counting every person," Feuer said in a statement. "Now, with little time to lose and so much at stake, I urge everyone to take the few moments necessary to be included in the census."

CNN has reached out to the Department of Justice for comment.

At a late Tuesday hearing, Koh had signaled concern with the decision to move up the end date from October 31. She pointed out that it is unlikely the Census Bureau will reach its own 99% standard for completion by the end of September.

"Four out of 50 states reached the threshold for closing," she said, referencing the Census Bureau's latest data. "Why is the bureau insisting on ending data collection in seven days? ... That means 46 states have not met the requirements yet."

Alexander Sverdlov, an attorney representing the government, argued that delays in the case are hurting the Census Bureau's ability to wind down counting and move to the number-crunching phase, which takes several months. He said the government is trying to meet a December 31 deadline to produce a final set of figures.

Internal documents released in the lawsuit and reviewed by CNN showed intense concern among career Census Bureau officials when they first got wind in late July that Ross might move up the deadline.

"It is ludicrous to think we can complete 100% of the nation's data collection earlier than 10/31 and any thinking person who would believe we can deliver apportionment by 12/31 has either a mental deficiency or a political motivation," wrote Tim Olson, who oversees the massive operation that sends employees door-to-door at households that have not responded to the survey.

His colleagues warned in a memo that ending the count early risked producing a tally of "unacceptable quality" with "fatal flaws" that carries the stain of "politically-manipulated results."

The government has argued, meanwhile, that the Constitution's requirement to conduct a count of the US population every 10 years does not specify whether or how it should be accurate.

In another fight over the census, the Trump administration said last week it plans to take its effort to exclude undocumented immigrants from the survey to the Supreme Court.

This story has been updated to reflect that the Trump administration is appealing the decision.