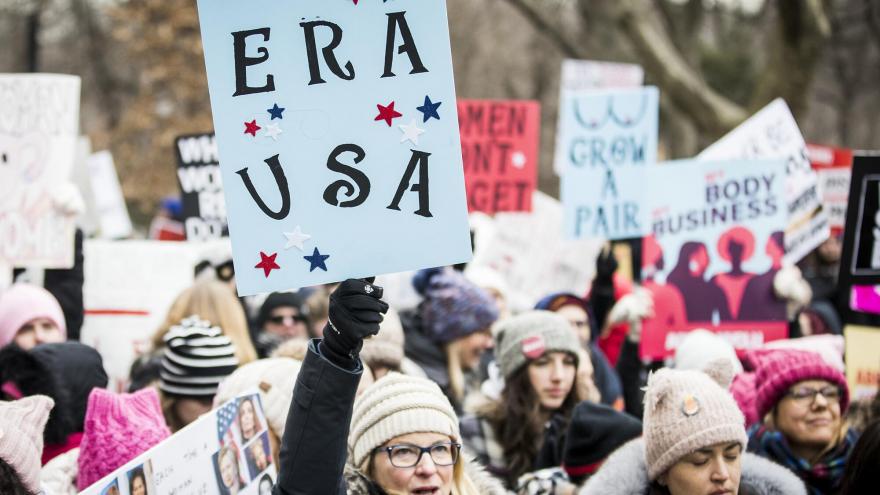 A federal district judge on March 5 dealt a blow to advocates of the Equal Rights Amendment in ruling that the deadline to ratify the ERA "expired long ago." In this photo, a marcher holds a sign that say "ERA USA" during the Woman's March in 2020.

(CNN) -- A federal district judge on Friday dealt a blow to advocates of the Equal Rights Amendment in ruling that the deadline to ratify the ERA "expired long ago" and three states' recent ratifications of the amendment arrived "too late to count."

Virginia, Illinois, and Nevada had sued the archivist of the United States last year to "carry out his statutory duty" of publishing and certifying the ERA as the 28th Amendment to the Constitution. The ERA stands as a century-long dream for many women and activists as it would ban discrimination based on sex and guarantee equality for women under the Constitution.

The three states had recently ratified the ERA, with Virginia claiming to be the 38th state -- and final state -- to ratify the amendment in 2020.

In their complaint, the three states' Democratic attorneys general argued that Congress' imposed deadline to ratify the ERA has not lapsed, because the time frame is not included in the amendment's body text. They also argued that the Constitution doesn't give Congress the power to dictate when a state ratifies an amendment and that a state's ratification is "a one-time event."

Under the Constitution, constitutional amendments are valid once ratified by three-fourths of the states -- or 38 states. Congress in 1972 passed the Equal Rights Amendment that stated: "equality of rights under the law shall not be denied or abridged by the United States or by any State on account of sex."

Congress included a seven-year deadline for states to ratify the ERA, later extending the deadline to 1982. But by then, only 35 states had signed off on the ERA -- with five of those states rescinding their support of the ERA within that time.

In his opinion Friday, Judge Rudolph Contreras in Washington, DC, wrote that a "ratification deadline in a proposing resolution's introduction is just as effective as one in the text of a proposed amendment."

"Plaintiffs' ratifications came after both the original and extended deadlines that Congress attached to the ERA, so the Archivist is not bound to record them as valid," he concluded.

The judge dismissed the case, also writing that the plaintiffs "lack standing to sue" because the archivist's "refusal to publish and certify the ERA thus does not cause them a concrete injury that could be remedied by ordering him to act."

The court did not weigh in on whether states can validly rescind ratifications nor whether Congress's extension of the ERA's ratification deadline was constitutional.

Virginia Attorney General Mark Herring said Friday that he's "not giving up this fight" and "will consider any options moving forward, including an appeal."

"The women of this country have waited over two centuries to be afforded equal protection under this country's founding document and with (Friday's) decision they will now be forced to wait even longer -- that's just wrong," Herring wrote on Twitter.

He added that he welcomes any support from the Biden administration and Congress "in ensuring that this amendment is recognized as part of the Constitution."

Katherine Franke, faculty director of the ERA Project at Columbia Law School, said in a statement Saturday that "by dismissing the lawsuit, the federal court affirmed that making the ERA part of the U.S. Constitution lies primarily in the hands of the people and their elected representatives."

"Yesterday's ruling is not a setback for sex equality or the ERA, rather it renews our focus on the bill introduced by Rep. Jackie Speier (with 203 co-sponsors from both political parties) that would declare the ERA fully ratified whenever three-quarters of the states have voted to do so," Franke continued.

Congress has reintroduced joint resolutions in the Senate and House to remove the ERA's deadline for ratification from the amendment, which opponents say can't retroactively be done. House Majority Leader Steny Hoyer announced Tuesday that the House will vote on the resolution the week of March 15. The resolution is expected to pass the House but faces a steep climb in the split Senate.

Anti-abortion groups strongly oppose the ERA because they see it as a way to expand access to abortion, saying the amendment could be interpreted to nullify federal and state restrictions.

Douglas D. Johnson, a senior policy advisor for National Right to Life and director of its ERA Project, praised Contreras' ruling in a statement to CNN on Friday, asserting that Democratic members of Congress and state attorneys general are "part of a political-pressure campaign to intimidate the federal courts into permitting them to air-drop the long-expired ERA into the Constitution."

"Today, a federal judge appointed by President Obama ignored the political pressures and unflinchingly enforced the Constitution," Johnson said. "The upcoming votes in Congress are another chapter in the political-pressure campaign directed at the courts. The Constitution does not empower Congress to time travel to 1972 to resuscitate a long-dead constitutional amendment."