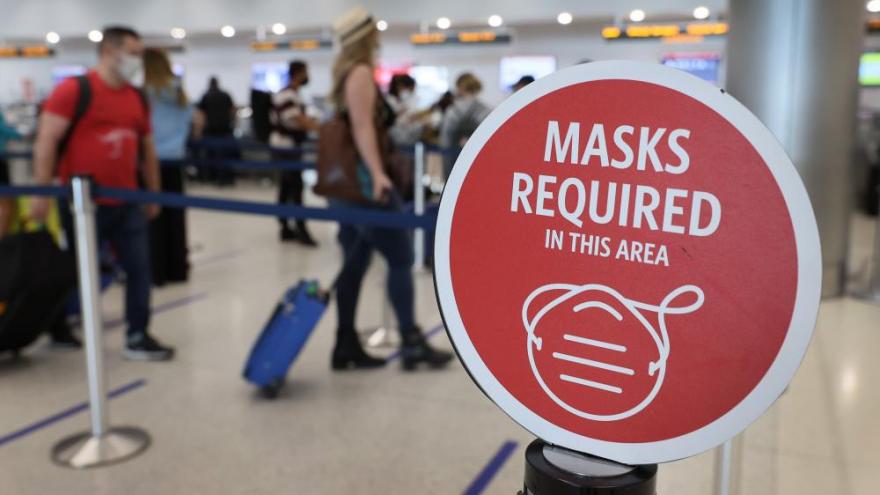 Federal officials are currently considering whether to renew the transportation mask requirement that expires next month, an official familiar with the discussions told CNN.

(CNN) -- Federal officials are currently considering whether to renew the transportation mask requirement that expires next month, an official familiar with the discussions told CNN.

The early February order from the Transportation Security Administration applies to airplanes, buses, trains and ferries, and transportation hubs like airports.

The agency is currently consulting with health experts, said the official, who declined to predict whether the order will be renewed or allowed to expire as scheduled on May 11.

TSA has received nearly 2,000 reports alleging violations from across the multiple modes of transportation, the official said. The agency disclosed in mid-February that it had received "fewer than 1,000" reports alleging non-compliance.

The agency has also reached the point of sending citations to alleged violators, the official said. The official could not say how many have been issued. There are multiple investigatory and review steps before a citation is ultimately issued.

Voices within the aviation industry that had pushed both the Biden and Trump administrations for such an order have called for it to be renewed. They said the Biden administration's order in February added teeth and consistency to a patchwork of local orders that applied to buildings like airports, and company policies requiring masks on airplanes and other vehicles.

"We do think it should maintain the mask mandate," Nick Calio, who leads the industry association Airlines for America, said at a Senate hearing on Wednesday. "It has helped considerably on airplanes and in airports."

Sara Nelson, president of the Association of Flight Attendants, said the government can support her members enforcing the order by "making it very clear to the public" that masks remain a requirement.

Some governors have rescinded orders or allowed mask requirements in their states to expire. President Joe Biden has taken a different approach: Soon after taking office in January, he directed the TSA, Centers for Disease Control and Prevention, Transportation Department, and other agencies to require masking.

At the Wednesday hearing, Sen. Roger Wicker, a Mississippi Republican who has been photographed not properly wearing a mask on aircraft, said passengers should do so "until the government changes the requirement."

"It does seem, though, sometime in the future that this thing needs to end," Wicker added.

Dr. Leonard Marcus, who has studied coronavirus transmission on airplanes at the Harvard T.H. Chan School of Public Health, told Wicker that the circulation of variants makes it difficult to say how long masks will be needed in enclosed spaces.

"For sure, when we're on the plane, when we're going through the airport buildings, when we're indoors, let's keep those masks on," Marcus said. "We want to make this crisis end as soon as possible."