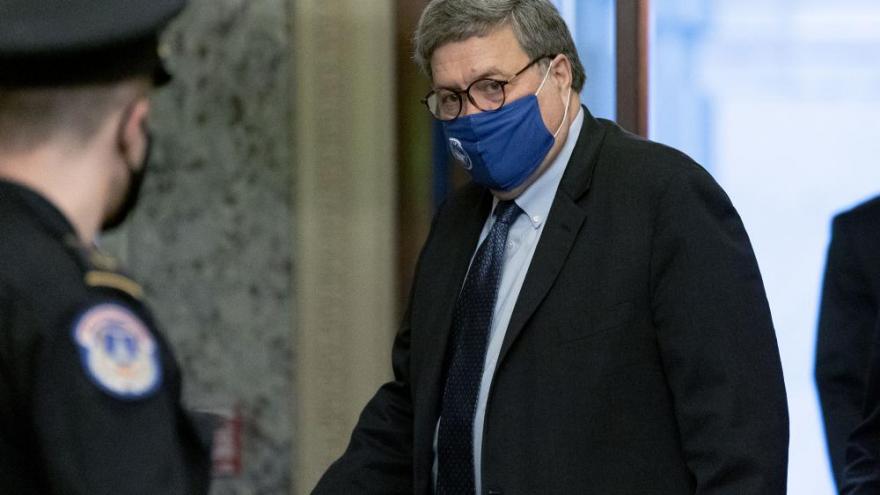 (CNN) -- A group of federal prosecutors on Friday urged Attorney General William Barr to rescind his order for any prosecutor to examine allegations of voting irregularities before states move to certify the results in the coming weeks, according to an internal letter obtained by CNN.

The letter from the 16 prosecutors comes days after Barr released a memo earlier this week telling prosecutors not involved with the election crimes branch of the Justice Department's Public Integrity Section to skip procedural steps to investigate "substantial" allegations of voter fraud.

"We urge you to rescind it," the prosecutors, who were assigned to enforce federal voting rights laws across the country on Election Day, wrote in boldfaced type about Barr's memo.

The bipartisan coalition of federal "District Election Officers" said Barr's marching orders are "not based on fact."

"It was developed and announced without consulting non-partisan career professionals in the field and at the Department. Finally, the timing of the Memorandum's release thrusts career prosecutors into partisan politics," the prosecutors wrote.

Barr's memo served as a catalyst for the resignation of Richard Pilger, the leader of the election crimes branch. Pilger spoke out against Barr's memo in a resignation letter that he forwarded to colleagues.

The letter was co-signed by 16 assistant US attorneys from 15 out of the 44 jurisdictions that were chosen by the Justice Department's Civil Rights Division to monitor the November 3 general election. The assistant US attorneys said in the letter that, in the districts they monitored, they found no evidence of substantial voting irregularities.

"In the jurisdictions where we serve as DEOs, in the 2020 election cycle, there is no evidence of 'substantial allegations of voting and vote tabulation irregularities' that 'could potentially impact the outcome of a federal election,' to use the language from the Memorandum," according to the letter.

Kerri Kupec, a spokeswoman for the Justice Department, declined to comment on the prosecutors' letter.

Instead, Kupec referred to the last paragraph of Barr's memo, which includes: "Nothing here should be taken as any indication that the Department has concluded that voting irregularities have impacted the outcome of any election. Rather, I provide this authority and guidance to emphasize the need to timely and appropriately address allegations of voting irregularities so that all of the American people, regardless of their preferred candidate or party, can have full confidence in the results of our elections."