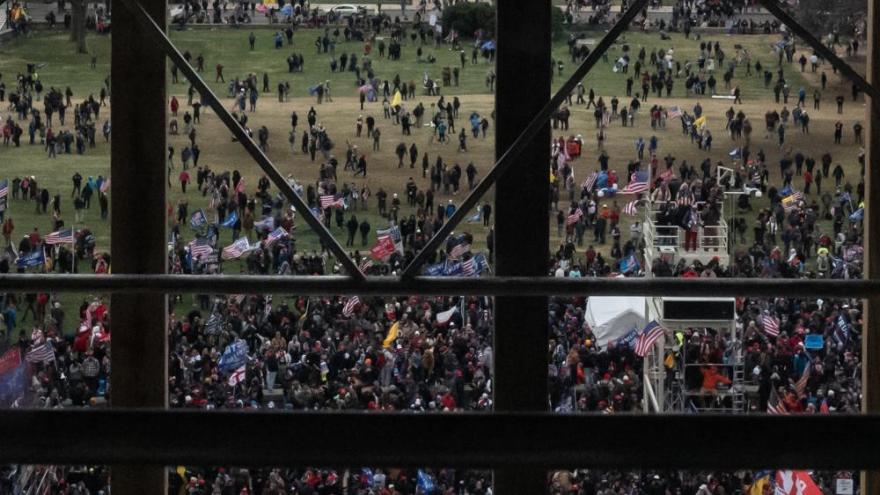 A crowd of Trump supporters gather outside as seen from inside the US Capitol on January 6, 2021, in Washington, DC. Federal criminal investigators are expanding the January 6 investigation.

(CNN) -- Federal criminal investigators have expanded the January 6 investigation to gather information about fundraising and organizing for the political rally held immediately before Trump supporters stormed the US Capitol, as well as the effort to subvert the Electoral College vote count, multiple sources tell CNN.

Subpoenas have been issued by a grand jury in Washington in recent weeks, seeking information on the rally and on the alternate slates of fake electors for former President Donald Trump in swing states he lost, sources said, marking a significant development in the probe.

Until recently, prosecutors were almost exclusively bringing cases against alleged rioters and some members of extremist groups accused of conspiring to disrupt the certification of the 2020 presidential election. An expanded inquiry into the rally and fake electors represents a new stage of the investigation that looks into a more well-connected political circle.

One of the sources said the inquiry appeared to be examining "a higher level of rally planning," including who was communicating with whom. There were multiple rallies before the Capitol riot on January 6, and the federal investigators appear to be asking about the one at which Trump spoke.

Some people who have received subpoenas have been looking for lawyers to help them with criminal defense, though the outreach from federal investigators treats them as potential witnesses.

Both the Justice Department and a spokesperson for the US Attorney's office in DC, which is leading the January 6 investigation, declined to comment on Thursday.

Many of those people have already been pursued as potential witnesses by the House select committee investigating the January 6 insurrection, the sources said.

Earlier this month, Garland said the department does "not shy away from cases that are controversial or sensitive or political" but has declined to answer specific questions about the January 6 investigation.

And to mark the one-year anniversary of the attack in January, Garland explicitly stated: "We follow the money."

One of the recent subpoenas, one source tells CNN, asked for information about the designation and treatment of individuals classified as "VIP attendees" at the Trump rally, an apparent reference to people who were given the ability to get closer to the stage of the event because of contacts they had.

The subpoena requested information about officials from the legislative and executive branches who had been involved in the "planning or execution" of any rally or attempt to impede the Electoral College vote counting, the source said.

It also asked about the effort by Trump allies to put forward alternate slates of electors from key swing states that President Joe Biden won, the source added. State attorneys general have also said they are looking into the effort, and some referred the matter to the Justice Department. Deputy Attorney General Lisa Monaco previously told CNN that prosecutors were looking into the matter.

Two additional sources also described a subpoena they are familiar with as seeking information similar to that of a subpoena that the House select committee had issued to rally organizers.

The Washington Post and The New York Times first reported on the expansion of the federal criminal probe, which operates separately from the Capitol Hill inquiry.

The investigation into January 6 is the largest ever conducted by the Justice Department, with nearly 800 people charged for allegedly taking part in the Capitol insurrection.

In recent months, investigators have made clear they are looking at broader anti-government plotting among extremist groups. Notable recent arrests include Stewart Rhodes, founder of the Oath Keepers, who is charged with seditious conspiracy for planning for months to disrupt the transition of power to Biden; and Enrique Tarrio, chairman of the Proud Boys, who had left DC by January 6 but is accused of plotting violence with others in the group.

In the Oath Keepers seditious conspiracy case, one defendant who is fighting her charges, Jessica Watkins, previously said she received a VIP pass to the Trump rally, and Joshua James, an Oath Keeper who pleaded guilty to seditious conspiracy and became a cooperator in the investigation, had said he was providing security to well-known figures on the right in DC around January 6.

At the rally, Trump told his supporters to "fight like hell" and march to the Capitol where members of Congress and Vice President Mike Pence were certifying the Electoral College result. The crowd then swarmed the building, breaking windows to get inside, attacking police officers and ultimately overtaking the Senate chamber, which had been evacuated.

The US Attorney's Office for DC, as it investigates the riot, has looked to follow the money in many of its cases since the beginning of the massive prosecution, including in conspiracy cases against members of the Oath Keepers and Proud Boys, according to court records.

From early in the sprawling criminal probe, federal investigators have been subpoenaing credit card and bank account information, even tracking down who paid for hotel rooms and flights to Washington, DC.