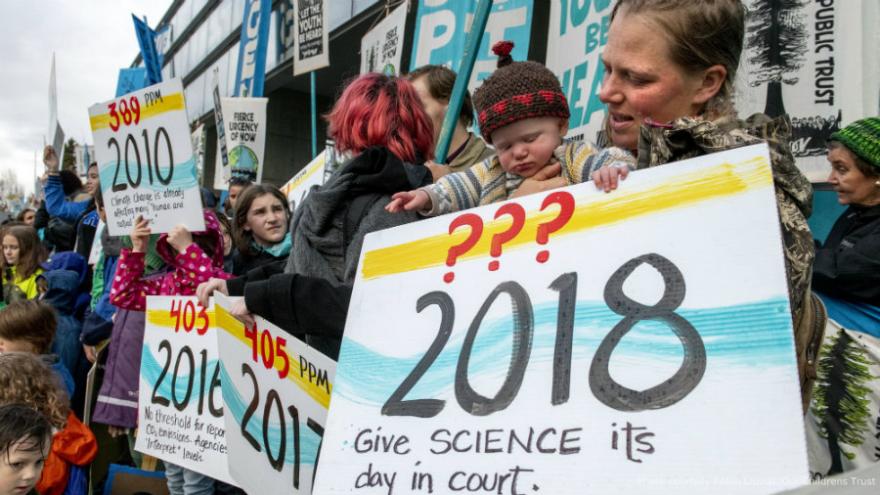 (CNN) -- The "climate kids" were back on the steps of a federal courthouse in Oregon on Monday. But their case against the United States government, alleging violations of their constitutional rights to a safe and livable atmosphere in the face of runaway global warming, has dragged on for so long without a trial that some of them aren't exactly kids anymore.

When the case was filed on their behalf in August 2015, Levi Draheim, the youngest plaintiff, was 8. Now he's 11. He's had to grow up considerably in those three years.

"I am a kid, and so I'm very impatient -- and I'm impatient for a very good reason," Levi said at a courthouse rally on Monday, his shock of sun-bleached hair barely peeking above a wooden podium. He spoke from a jotted list of notes, not from a script. "I live on a barrier island, and I have seen the sea level rise maps. I have personally had to evacuate my home because of hurricanes. I have seen fish kills on my beach, and I have seen changing weather -- more and more hot days. That's why it's so important to move forward with this trial."

The now slightly less young plaintiffs had expected to be inside the federal court on Monday -- not outside on the steps in the rain, holding black umbrellas and protest signs that said things like "Let the youth be heard" and "Give science its day in court."

After years of hearings, a trial date had been set for October 29.

But 10 days before trial, the US Supreme Court issued a stay that has temporarily halted proceedings. The court is considering the federal government's petition for writ of mandamus, which the Department of Justice describes as an "extraordinary remedy" that should be used in "exceptional circumstances of peculiar emergency or public importance."

Federal attorneys are questioning whether the kids have a right to "a climate system capable of sustaining human life" under the Constitution or public trust doctrine. They say federal authorities will waste time and money by responding to what they call "baseless claims." And they argue in court filings it's a violation of the separation of powers to ask courts essentially to impose climate-change policy on federal officials, rather than waiting for Congress or other elected officials to do that.

"In our view, the Oregon lawsuit is an unconstitutional attempt to use a single court to control the entire nation's energy and climate policy," Acting Assistant Attorney General Jeffrey H. Wood said during an October 19 speech in San Diego. "It is a matter of separation of powers and preserving the opportunity in our system of government for those policies to be decided by the elected branches, not the courts.

The United States has contributed more to global warming cumulatively than any other nation and is the second biggest annual carbon polluter, behind only China, according to the World Resources Institute and World Bank. A recent report from the UN's Intergovernmental Panel on Climate Change finds that humans need to reduce carbon pollution to net zero by 2050 to meet climate goals.

US courts already have denied similar legal maneuvers aimed at halting the proceeding of the climate kids' case, said Mary Wood, a law professor at the University of Oregon. It's unclear when the Supreme Court will rule or what the outcome could be, she said. The "barrage of petitions" aiming to stop the kids "clearly show the administration is worried about what will come out at trial," Wood said by phone. "And they're just taking desperate measures to avoid a trial. It's changed the story. What are they trying to hide?"

The Department of Justice declined a CNN request for comment.

The petitions are described by supporters as an attempt to "silence" these kids, who claim that younger people have more to lose in the climate crisis because they'll be living with it longer.

"Our world is burning in front of our eyes, and what Juliana [v. United States] tells us is that our children know it," Garrett Epps, a professor of constitutional law at the University of Baltimore, wrote in The Atlantic, claiming the government is "trying to silence" the young plaintiffs. "The government fears these 21 children; it asks the Supreme Court to tell them they do not even deserve a chance to fail" in court.

"Let this youth group be heard! Let the experts testify! Let the court's doors be opened!" Philip Gregory, one of the attorneys for the young people shouted to a crowd of supporters at the courthouse rally in Oregon. "This is not just the 'trial of the century,' this is the trial for the future of this century."

More than 60 support rallies were planned across the country on Monday, according to organizers. The lawsuit is funded by the nonprofit Our Children's Trust, based in Eugene, Oregon, which also has filed climate change lawsuits in other jurisdictions.

Supporters see the kids' suit as one of the most sweeping court challenges to US climate policy. The plaintiffs allege they are being discriminated against as young people, because they've done little to cause global warming but will suffer its effects disproportionally as they live into the climate-changed future. They claim federal agencies are violating their constitutional rights to "life, liberty and property" by pursuing actions that promote fossil fuel use. They also claim the federal government is violating public trust doctrine by allowing the pollution of the atmosphere, endangering young people and future generations.

"This case is a shining example of what law can be," Rick Reibstein, a lecturer in environmental law at Boston University, wrote on the American Bar Association's website. "This case gives me hope that we will not continue to cooperate in our own destruction, and future generations will be able to rely on us to uphold the spirit of the law and purpose behind government."

It's important the kids and their attorneys can make these arguments in court, Michael B. Gerrard, director of the Sabin Center for Climate Change Law at Columbia Law School in New York, told CNN before the temporary stay was issued. "This will be a very rare opportunity for the public to see the science underlying climate change -- not merely asserted or disputed but closely examined in the crucible of cross-examination," he said by phone. "Courtrooms tend to be no-BS zones."

Gerrard and the Sabin Center have been tracking climate change lawsuits in the United States and around the world. As governments fail to cut emissions fast enough to avoid dangerous climate change, attorneys increasingly are seeking action from governments and the fossil fuel companies themselves. The kids' climate suit asks the courts to force the federal government to make a plan that will result in a livable atmosphere for future generations. Other cases seek damages associated with the expense of dealing with a climate-changed world, including sea walls and other expensive infrastructure used to dampen the effects of warming.

Some but certainly not all of the cases have been successful. An environmental group in The Netherlands, for example, sued the Dutch government on behalf of citizens. The court ordered the country to limit greenhouse gas emissions, saying current policy was insufficient, according to a report on climate change litigation by the United Nations Environment Program and the Sabin Center.

"I don't think it's the only way but certainly in the face of a hostile White House and a hostile Congress, the courts are an essential component of the fight," Gerrard said.

The Obama administration also opposed the lawsuit when it was filed in 2015.

The three years of waiting have worn on some of the 21 youth plaintiffs in the suit.

The oldest is now 22 years old, and seven are in college, a spokeswoman for Our Children's Trust said.

They've watched the world change, too.

For Levi, climate change is an existential threat to his home. He told CNN by phone that he recently saw a map posted at his swim team's pool that showed what the coastline would look like after decades of rising seas. His hometown, Satellite Beach, Florida, wasn't even on the map, he said.

"I just kinda thought, 'Oh crap, this is actually happening,'" he said.

Jayden Foytlin, a teenager from Louisiana, watched her home flood in 2016 in a storm that scientists linked to human-induced global warming. "I don't want to see another family go through what we are experiencing," she said after a court hearing in 2016, glasses slipping off the end of her nose. Several people died in the floods near Baton Rouge. "Nobody should have to bury their loved ones simply because the government wants to bury their heads from the truth or because oil companies want to bury themselves in money," she said.

The kids have watched the science get scarier. A landmark Intergovernmental Panel on Climate Change report this fall said the world only has about a decade to avert catastrophic climate change. Already humans have contributed to warming the planet 1 degree Celsius, primarily by burning fossil fuels and clearing forests. And they've watched federal policy move away from addressing these existential challenges. In 2015, the United States supported the Paris Agreement on Climate Change, which aims to avert disastrous warming. Now, President Donald Trump has pledged to pull the United States out of that international agreement, saying it "unfairly punishes the United States" and would result in "draconian financial and economic burdens" for the country. His administration, which has at times denied the scientific consensus that humans are causing global warming primarily by burning fossil fuels, also is trying to repeal Obama-era policies like the Clean Power Plan, which aim to limit pollution.

"My generation hasn't even been on this planet for more than two decades but now we're expected to carry the burden" of problems inherited from older generations, said Nathan Baring, a teenager from Alaska, at the plaintiffs' rally in Oregon on Monday.

Julia Olson, chief legal counsel for Our Children's Trust, told CNN there is no logical venue to refile a case like this if it is thrown out entirely. "This is the lawsuit. This is it. And it has to be heard," she said in a telephone interview. "But if the system denies these young people the right to be heard in the court of law then we will create another forum to do this -- whether it's outside on the courthouse steps, or another venue. We will do this. It's such an important story."

Federal officials have known for decades that burning fossil fuels would contribute to a dangerous climatic system -- yet they continued to encourage their production, she said.

"I think the government doesn't want that information to see the light of day," Olson said.

So does Levi, the 11-year-old surfer from Florida.

"I guess," he said at the microphone, "I'll just have to be patient a little bit longer."