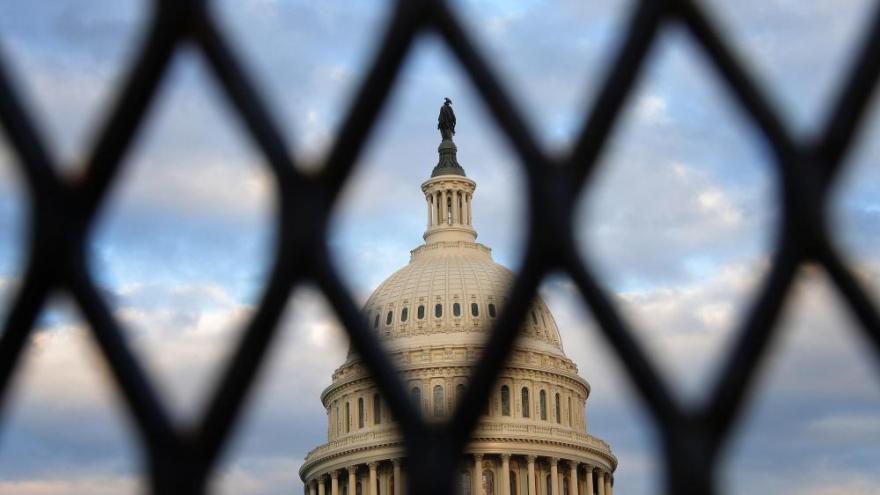 Federal law enforcement is on high alert about a group of violent militia extremists having discussed plans to take control of the US Capitol on or about March 4 -- a date when some conspiracy theorists believe former President Donald Trump will be returning to the presidency.

(CNN) -- Federal law enforcement is on high alert Thursday in the wake of an intelligence bulletin issued earlier this week about a group of violent militia extremists having discussed plans to take control of the US Capitol and remove Democratic lawmakers on or around March 4 -- a date when some conspiracy theorists believe former President Donald Trump will be returning to the presidency.

US officials on Wednesday alerted lawmakers to a potential threat, for which security has been enhanced as a precaution. The House changed its schedule in light of warnings from US Capitol Police, moving a vote planned for Thursday to Wednesday night to avoid being in session on March 4. The Senate is still expected to be in session debating the Covid-19 relief bill.

The joint warning from the FBI and the Department of Homeland Security on Tuesday underscores a broader effort by federal agencies to avoid repeating the mistakes made ahead of January 6, when officers were overtaken by a violent pro-Trump mob that stormed the Capitol. Those intelligence sharing and planning failures have been laid bare over the last two months in several hearings and have been a focal point of criticism from lawmakers investigating the violent attack that left several people dead.

The violent extremists also discussed plans to persuade thousands to travel to Washington, DC, to participate in the March 4 plot, according to the joint intelligence bulletin.

One source noted to CNN that it is mostly online talk and not necessarily an indication anyone is coming to Washington to act on it.

Some of the conspiracy theorists believe that the former President will be inaugurated on March 4, according to the joint bulletin. Between 1793 and 1933, inauguration often fell on March 4 or a surrounding date.

US Capitol Police acting chief Yogananda Pittman told Congress earlier Wednesday that her department had "concerning intelligence" regarding the next few days in Congress -- but said it wouldn't be "prudent" of her to share the "law-enforcement sensitive" intelligence in a public hearing or public format.

Pittman assured lawmakers, though, that her department is in an "enhanced" security posture and that the National Guard and Capitol Police have been briefed on what to expect in the coming days.

There has been a concerted effort among federal agencies to communicate the possible threats ahead of March 4 in a way they failed to do before January 6.

The effort to improve preparation extends to communicating with state and local officials. DHS held a call Wednesday with state and local law enforcement officials from around the country to discuss current threats posed by domestic extremists, including concerns about potential violence surrounding March 4 and beyond, according to two sources familiar with the matter.

While specific details from the call remain unclear, both sources said the overarching message from DHS officials is that addressing threats posed by domestic extremists requires increased communication and intelligence sharing across federal and state and local entities, as well as a shift in how law enforcement officials interpret the information they receive.

In a clear sign federal agencies are working to avoid the same communication failures for which they have been roundly criticized since the Capitol attack, DHS officials are stressing that law enforcement should not view intelligence solely through the lens of whether a threat qualifies as "credible and specific," but use the warnings coming from DHS, FBI and other partner agencies to inform decisions about their security posture, even if the information provided falls short of pointing to an imminent attack or violence, the sources said.

Federal officials are emphasizing the point that gaps in intelligence sharing left law enforcement unprepared for the chaos that unfolded on January 6, even though they were notified of potential violence days before the attack, and that going forward, bulletins issued by DHS and FBI indicate a threat is serious enough to be communicated to relevant entities, even if the intelligence is based primarily on online chatter or other less definitive indicators, the sources said.

DHS acting intelligence chief Melissa Smislova testified Wednesday that DHS is "completely dissatisfied" with the results of the department's "efforts leading up to January 6th."

She told lawmakers that the department is re-examining how it distributes information and coordinates with partners. "We thought that it was sufficient and clearly it was not," she said.

"We will do better," she added.

Homeland Secretary Alejandro Mayorkas has called on the department to evaluate its operational posture at the tactical and strategic level, specifically the ability to respond to a potential emerging situation within the Capital region, a US official told CNN.

Perceived election fraud and other conspiracy theories associated with the presidential transition may contribute to violence with little or no warning, according to the bulletin, which is part of a series of intelligence products to highlight potential domestic violent extremist threats to the Washington, DC, region.

"Given that the Capitol complex is currently fortified like a military installation, I don't anticipate any successful attacks against the property," said Brian Harrell, the former assistant secretary for infrastructure protection at DHS. "However, all threats should be taken seriously and investigations launched against those who would call for violence. We continue to see far-right extremist groups that are fueled by misinformation and conspiracy theories quickly become the most dangerous threat to society."

In the current environment, "You really cannot underestimate the potential that an individual or a small group of individuals will engage in violence because they believe a false narrative that they're seeing online," the US official said.

The false narrative of a stolen election is still drawing the attention of domestic extremists, the official said, adding that there are people "in the domestic extremist world who are calling for acts of violence in response to that narrative."

Although March 4 is a concern to law enforcement, it's not a "standalone event," the official said; rather, it's part of a "continuum of violence" based domestic extremist conspiracy theories.

"It's a threat that continues to be of concern to law enforcement. And I suspect that we are going to have to be focused on it for months to come," the official said.

The bulletin also notes that militia extremists "have allegedly threatened an attack against the US Capitol using explosives to kill as many members of Congress as possible during the upcoming State of the Union address, according to (the) US Capitol Police Chief."

Pittman warned last month that militia groups involved in the January 6 insurrection want to "blow up the Capitol" and "kill as many members as possible" when President Joe Biden addresses a joint session of Congress.

At the time, Pittman said law enforcement remains concerned about threats by known militia groups "with a direct nexus to the State of the Union" address.