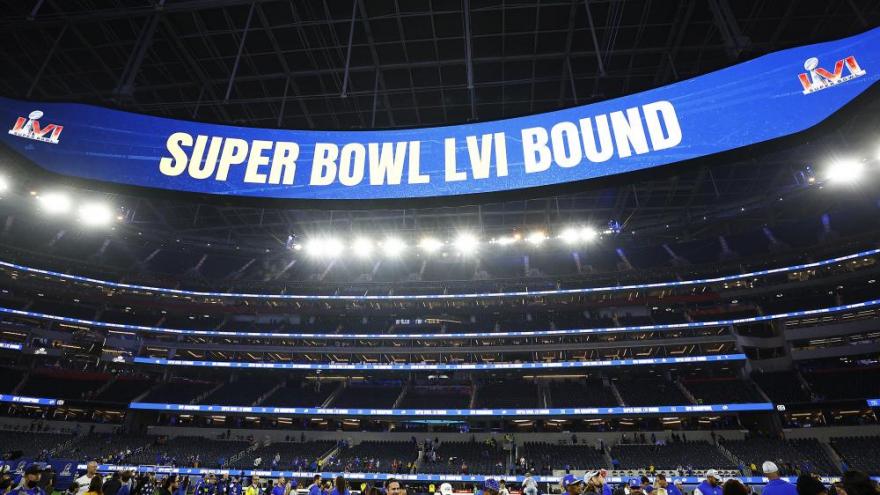 The jumbotron reads "Super Bowl LVI Bound" on January 30 after the Los Angeles Rams defeated the San Francisco 49ers, 20-17, in the NFC Championship Game at SoFi Stadium in Inglewood, California.

(CNN) -- The federal coordinator for security at Super Bowl LVI said Wednesday he's "cautiously optimistic and comfortable" about security plans leading up to the game at SoFi Stadium in Inglewood, California, in less than two weeks, noting that "extensive manpower" is being deployed to protect the stadium and public.

There are currently no known "credible, specific threats" to the Super Bowl, Jesse Baker said, but added that "you don't want to say that we've had a failure of imagination."

"A perimeter can only go so far, so you're going to have vulnerabilities at some point, but I feel confident that those have been addressed," he said, noting potential terrorist threats.

The Federal Aviation Administration has designated the Los Angeles area a 'No Drone Zone' for the Super Bowl, prohibiting drones within a 30-nautical-mile radius of the stadium up to 18,000 feet in altitude from 2:30 p.m. to 8:30 p.m. PST on February 13, 2022.

The Super Bowl is designated a "Special Event Assessment Rating Level 1", which means the local police department is in charge of security, but a federal security coordinator is appointed to provide support, manage federal assets and work with the local jurisdiction.

Baker, the US Secret Service special agent in charge of the Los Angeles Field Office, is serving as the federal coordinator for this year's Super Bowl security efforts.

Chief Mark Fronterotta of the Inglewood Police Department is "ultimately in charge of the security" for the Super Bowl, Baker said.

The security perimeter around the stadium will be shared with the public in the coming days, he added.

Asked whether an invasion from Russia into Ukraine would change the security posture for the federal government, Baker said, "I feel comfortable in our environment for the security" regardless of any world events, declining to comment further.

In addition to the Secret Service, numerous agencies are involved in protecting the Super Bowl, including US Customs and Border Protection, Homeland Security Investigations, the Cybersecurity and Infrastructure Security Agency, the Bureau of Alcohol, Tobacco, Firearms and Explosives, FBI, Department of Defense, as well as other local agencies, such as the Los Angeles Police Department and Los Angeles County Sheriff's Department and California Highway Patrol.

CBP helicopters and Defense Department fighter jets will be available to help protect the air space, Baker said. Cyber threats have also been examined ahead of the game.

There has been an "extreme amount of training and scenarios," Baker said, when asked about potential cyber threats amid Russia-Ukraine tensions.

"It can be a significant thing if it's not considered, but it absolutely has been considered and prepared for in this case by the relevant components," he added.