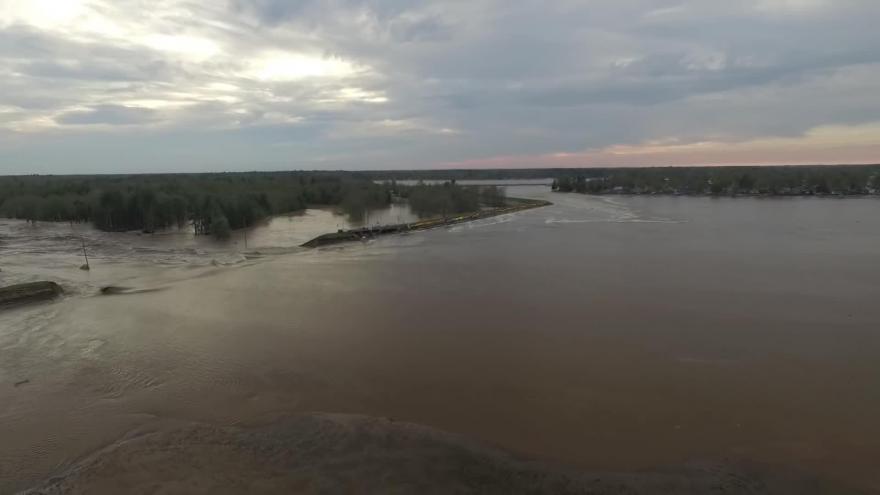 The Tittabawassee River breached the dam in Edenville, Michigan, on Tuesday evening, May 19, after days of heavy rain.

(CNN) -- Federal regulators have warned for more than 20 years of inadequate spillways at a Michigan dam that was breached Tuesday, sending floodwaters raging into a city of more than 40,000.

Documents available on the Federal Energy Regulatory Commission website show federal regulators warned multiple companies that the Edenville Dam was not ready to handle a massive flood. The federal government threatened large fines against one private company that operated the dam until eventually revoking its license in 2018.

Although federal regulators repeatedly warned about the dam's inability to handle a large flood, it took years for federal authorities to crack down on the dam's operator after more than 13 years of cajoling them to abide by the terms of their license.

Bridge magazine was first to report on the safety issues with the dam.

Documents posted by FERC show that inspectors warned in January 1999 that the operator needed to increase the capacity of the dam's spillways. Spillways are structures that allow for floodwaters to safely escape downstream and prevent incidents such as the massive flood that inundated Midland, Michigan, this week from occurring.

In a January 4, 1999, letter to Wolverine Power Corporation -- the company that operated the dam at the time -- Donald Lesniak, then the regional director of FERC's office in Chicago, told the company's then-general manager that "modifications to increase spillway capacities at all your projects remain the primary concern."

The Edenville Dam, built in 1924, failed Tuesday evening, leading to the evacuation of thousands of people from Midland and the surrounding communities. The flood could have lasting environmental effects after waters from the Tittabawassee and Tobacco rivers mixed with a Dow Chemical containment pond and inundated a federal Superfund site downriver that was caused by Dow's release of dioxins years ago.

FERC directed Boyce Hydro, the owner of the dam, to establish an independent investigation team to analyze the cause of the overtop of the Sanford Dam, a separate barrier in the area, according to Celeste Miller, a FERC spokeswoman.

"FERC continues to follow the reports on the situation at the Edenville and Sanford Dams. Our primary concern is the safety of Michigan residents, and we urge them all to continue heeding evacuation guidance by local emergency management agencies," said Neil Chatterjee, FERC's chairman, in a written statement. "When it is appropriate and safe to do so, FERC will send a staff engineer to the site to assist with the investigation. The Commission pledges to work closely with state officials and coordinate our investigatory efforts wherever possible."

FERC no longer has oversight of the Edenville Dam, which was transferred to state of Michigan oversight in 2018. Michigan Gov. Gretchen Whitmer has said the state will be investigating the operator of the dam, Boyce Hydro.

Boyce Hydro took over operations of the dam in 2004 and, according to documents filed by FERC officials, did not come up with "adequate" plans for increasing spillway capacity in the ensuing 13 years, eventually leading to that company having its license revoked and a local task force given a preliminary permit to operate the dam. That local task force does not expect to fully take over dam operations until 2022.

According to a June 2017 compliance order written by Jennifer Hill, who was the director of FERC's division of hydropower administration and compliance at the time, Boyce Hydro had a "longstanding failure to address" the dam's "inadequate spillway capacity." She noted that Edenville Dam had a high hazard rating, meaning that a failure would result in "a threat to human life and/or would cause significant property damage."

That proved true on Tuesday when the dam failed after intense rains in the mid-Michigan region, sending floodwater into Midland's downtown. Photos showed floodwaters reaching the tops of stop signs and the roof of the city's farmer's market. Whitmer, a Democrat, warned the city's downtown could be left under 9 feet of water by the time floodwaters peaked.

Hill wrote in the 2017 compliance order that Boyce Hydro had ignored multiple directives from regional FERC officials to increase the dam's capacity to handle large-scale floods. The dam could only handle 50% of a Probable Maximum Flood, she wrote, and federal regulations require dams to be able to handle 100% of a Probable Maximum Flood, otherwise known as "the flood that may be expected from the most severe combination of critical meteorological and hydrologic conditions" in a given area, according to FERC.

The compliance order followed more than a decade of FERC warnings to Boyce Hydro about the dam's inadequacy.

According to the compliance order, Boyce Hydro and FERC met in 2005, 2006, 2007, 2008 and 2009 to discuss the need to increase the dam's capacity. In 2009, the company was given a four-year extension to construct new spillways that would get it in compliance with federal regulations.

However, that work was "never completed," Hill wrote in the order. FERC, at that point, gave Boyce yet another extension to construct spillways that still have not been built.

It wasn't until September 2018 that the federal government finally punished Boyce Hydro for repeatedly ignoring their directives.

On September 10, 2018, FERC revoked the company's license to operate the dam, stating the company "failed to comply with obligations set out" in the compliance order, aside from acquiring and documenting property rights that FERC had required.

"Boyce Hydro's license includes terms and conditions concerning dam safety, property rights, water quality, public recreation and safety, and other areas of public concern," the order revoking the license stated. "Boyce Hydro has a long history of non-compliance with those terms and conditions and with related provisions in the (Federal Power Act) and Commission regulations and orders."

CNN attempted to call a phone number listed for Boyce Hydro for comment, but the call went unanswered and no voicemail system had been set up for the number.

However, an attorney for the company wrote in a March 2018 document -- a month after FERC proposed revoking the company's license -- that the company did "everything it reasonably can do" to satisfy FERC's demands.

Michael Swiger, a Washington, DC-based attorney representing the company, wrote that Boyce operated under "serious financial constraints" that kept it from funding the necessary construction of spillways. Swiger said the company had found the funding to do the construction work, but the federal government was not allowing them to move forward due in part to a lack of a construction timeline.

Swiger issued a warning that revoking the company's license would ultimately end up decreasing public safety.

"In sum, although (Boyce Hydro) has not fully met the requirements of the Compliance Order, it has certainly done everything it can reasonably do to meet those requirements given its limited resources and the lack of reasonable time to comply," Swiger wrote. "Moreover, as discussed below, license revocation would be self-defeating since it would ensure that the dam's spillway capacity is never increased."

Boyce Hydro is in the process of transferring ownership of the Edenville Dam to the Four Lakes Task Force, an entity set up by Midland and Gladwin counties to operate four lakes in the area created by the dams. In January, the task force signed a purchase to acquire the Edenville, Sanford, Secord and Smallwood dams and the lakes they create, but the titles for the dams have not yet been transferred.

The task force did not immediately respond to CNN's request for comment on any work it has done to improve the dam.

The task force notes on its website that it made the purchase because "the repairs and improvements to the dams are a higher burden than revenue from electrical generation alone can support."

In a frequently asked questions section of its website, the task force says the dams need maintenance and improvements for long-term safety. But it also attempted to reassure local residents that the dams will protect them.

"The dams are considered safe and fit for operation in the short-term," the website reads.