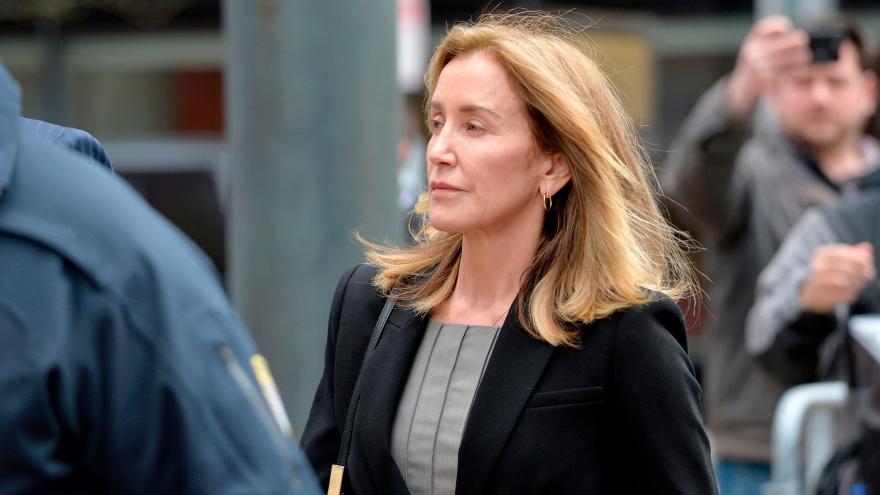 Felicity Huffman will spend 14 days in prison for her role in what authorities have called the largest college admissions scam ever prosecuted.

Huffman will have to serve one year of probation, perform 250 hours of community service and pay a $30,000 fine.

The actress is the first of more than 30 parents charged in the scheme to be sentenced.

Assistant US Attorney Eric Rosen on Friday argued that actress Felicity Huffman should serve one month in jail for her role in a massive college admissions scam.

Rosen cited a letter Huffman submitted to the judge last week, in which she tried to explain why she said, in part, that she wanted to give her daughter "a fair shot." Huffman added she now sees "the irony in that statement."

"With all due respect to the defendant," Rosen said, "welcome to parenthood."

"Most parents," he added, "have the moral compass and integrity not to step over the line. The defendant did not."

Huffman's lawyers are asking for no jail time, one year of probation, 250 hours of community service and a $20,000 fine.

Felicity Huffman has arrived in federal court in Boston, where she's expected to be sentenced Friday for her connection to what authorities called the largest college admissions scam ever prosecuted.

The actress arrived hand-in-hand with her husband, the actor William H. Macy. They were accompanied by about a dozen loved ones.

Felicity Huffman says she will accept whatever punishment the court deems appropriate. And in just a few short hours, the seasoned actress finds out what price she will pay for her role in what authorities called the largest college admissions scam ever prosecuted.

Huffman, who along with fellow actress Lori Loughlin are among the most high-profile parents to be caught up in the admissions scandal, will be sentenced on Friday.

And while the former "Desperate Housewives" actress is expected to address a packed courtroom during her sentencing, Huffman already submitted a letter to Judge Indira Talwani last week in which she tried to explain why she gave the scam's mastermind $15,000 to boost her daughter's SAT scores.

"In my desperation to be a good mother I talked myself into believing that all I was doing was giving my daughter a fair shot," Huffman said in the three-page letter. "I see the irony in that statement now because what I have done is the opposite of fair. I have broken the law, deceived the educational community, betrayed my daughter and failed my family."

Huffman's letter adds yet another dimension to the sentencing decision that will await Talwani.

Prosecutors and the defense differ on sentence length

After Huffman pleaded guilty this year to conspiracy to commit mail fraud and honest services mail fraud, prosecutors, defense attorneys and even US Probation and Pretrial Services officials have been battling over how the mother of two should be punished.

Prosecutors have suggested one month in prison and a $20,000 fine for Huffman.

Her lawyers are asking for no jail time, one year of probation, 250 hours of community service and a $20,000 fine.

In a motion filed Wednesday, Huffman's defense team says the government's sentencing memo cited examples of previous cases that are "very different" than hers, and any comparison is "apples to oranges."

Huffman's lawyers argued that the sentencing guidelines in those cases were much higher and reserved for the mastermind of schemes, not mere participants.

Prosecutors, meanwhile, have argued that universities and testing companies were the victims of the schemes, and the amount that parents paid should correspond to the penalties' severity.

But US Probation and Pretrial Services, which prepares pre-sentence investigation reports for each defendant, has argued overall, that the universities and testing companies suffered no monetary harm, and the price of the parents' bribes is therefore not relevant to any sentences. And if Talwani sides with this argument, that could mean more lenient sentences for parents including Huffman.

More than 50 people -- parents, coaches, test administrator and conspirators -- were charged in the scandal, in which prosecutors said mastermind William "Rick" Singer either facilitated cheating on standardized tests or bribed college coaches to give students an advantage in the admissions process.

Of those charged, more than 30 are parents, accused of conspiring with Singer. More than a dozen of those parents, including Huffman, have pleaded guilty to conspiracy to commit fraud.

Huffman is expected to be the first parent sentenced in the case.

So far, only one person has been sentenced: Former Stanford sailing coach John Vandemoer, who served no jail time.

Huffman has written that before she paid $15,000 to rig her daughter's SAT test, she worked with Singer's college counseling and preparation business legitimately for a year to try to improve her eldest daughter's math SAT scores.

But the scores didn't improve, and Singer warned her that none of the colleges her daughter was interested in would consider her auditions to their acting programs, Huffman wrote to the judge.

She wrote that Singer eventually offered to have a proctor boost the daughter's scores after she took the test, without the daughter ever knowing. Huffman struggled with the offer for weeks before relenting, she wrote.

Huffman recalled the moment her daughter "looked at me and asked with tears streaming down her face, 'Why didn't you believe in me? Why didn't you think I could do it on my own?'"

"I had no adequate answer for her," Huffman wrote.

Singer pleaded guilty to four charges in March related to cheating on standardized tests and bribing college coaches and administrators.

Her loved ones wrote letters of support to the judge

Huffman's husband, actor William H. Macy, and other loved ones submitted letters to Talwani on Huffman's behalf, pleading for leniency.

Each letter outlined Huffman's loyalty and commitment to the writer -- an attempt to show her role in the admissions scam was an outlier in her life.

Macy also shed some light on the immediate aftermath of Huffman's early morning arrest by the FBI in March.

Two days after the arrest, Macy wrote, their eldest daughter was headed for an audition at a school she had her heart set on -- one that didn't require SAT scores. But when she got off the plane, the school emailed her, formally rescinding its audition invitation because of the scandal.

Macy wrote their daughter "called us from the airport in hysterics," begging them to "do something, please, please do something."

Macy also said his daughter still was traumatized from watching her mother's arrest.

And she especially remembered Huffman's help during contract negotiations. Longoria was set to be paid less than the other main performers, until Huffman stepped in and made them all negotiate for the same pay, she wrote.

"It wasn't about the money for me; it was the fact that I was seen as an equal, which is how Felicity had always seen me," Longoria wrote.