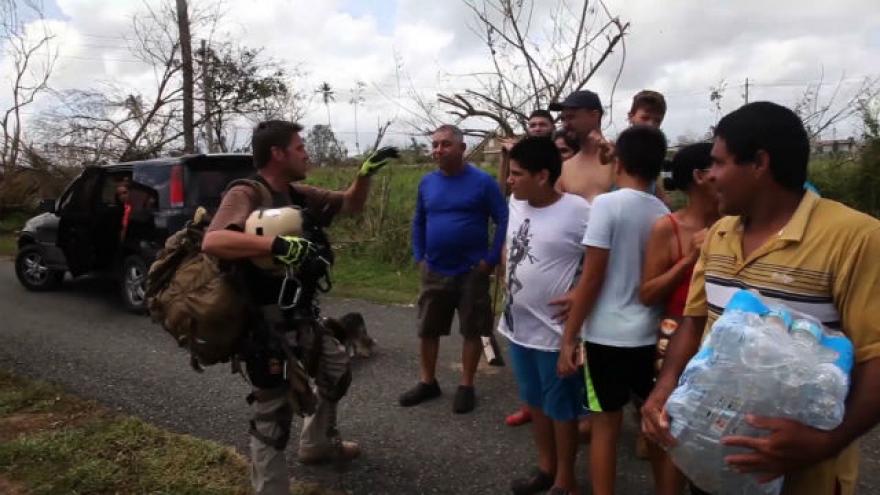 AMO Black Hawk teams are currently running operations of getting water and supplies to locations inaccessible by vehicle while also conducting search and rescue operations. Photo courtesy US Customs and Border Protection 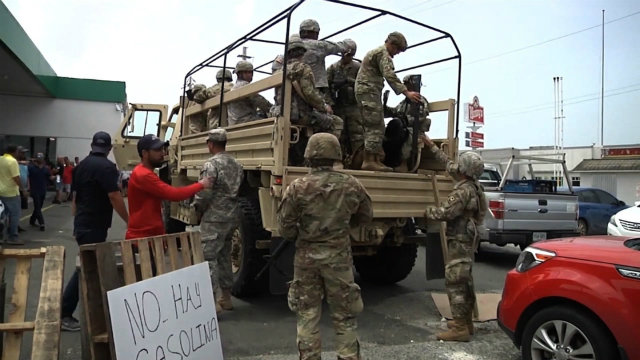 Citizen-soldiers and airmen support the Puerto Rico police department by providing security at gas stations in several regions of the island after Hurricane Maria battered the region. Department of Defense

(CNN) -- More than four months after Hurricane Maria battered Puerto Rico, the Federal Emergency Management Agency is halting new shipments of food and water to the island, an agency official with direct knowledge of the plan told CNN on Tuesday.

The island government appeared blindsided by the decision, saying it was still in talks with FEMA on a timetable for assuming control of food and water distribution.

FEMA has called the island's emergency operation the longest sustained distribution of food, fuel and water in agency history, including more than $1.6 billion worth of food and more than $361 million worth of water.

New shipments of food and water will officially stop Wednesday to the US commonwealth in the Caribbean, though FEMA said it has more than 46 million liters of water, 2 million Meals Ready to Eat and 2 million snack packs on the ground for distribution if needed.

"The commercial supply chain for food and water is re-established and private suppliers are sufficiently available that FEMA-provided commodities are no longer needed for emergency operations," the agency said in a statement.

"The Government ... is waiting for critical data provided by FEMA in order to determine when the responsibilities should be transferred from FEMA to the Government of Puerto Rico," Pesquera said in a statement.

"This has not happened yet and we were not informed that supplies would stop arriving, nor did the Government of Puerto Rico authorize this action."

Pesquera acknowledged that conditions "in most areas have improved and many economic indicators are showing that recovery is underway."

FEMA spokesman William Booher said the agency "will continue to support any documented needs and will provide supplies to volunteer agencies and other private nonprofit organizations ... working with households in rural, outlying areas to address ongoing disaster-related needs as power and water is gradually restored."

The agency, which still has about 5,000 personnel on the island, is prepared to restart food and water shipments should the need arise, according to the official with knowledge of the plan.

San Juan Mayor Carmen Yulin Cruz, a frequent critic of the federal response to the devastating September hurricane, reacted to the decision on Twitter, asking in Spanish, "Seriously, are they leaving?"

"This is the kind of indifference that must be stopped. Enough," wrote Cruz, who will attend Tuesday's State of the Union address as a guest of US Sen. Kirsten Gillibrand, D-New York.

Speaking Tuesday at a Washington event sponsored by the Latino Victory Fund political action committee, the mayor said some schools outside San Juan still have no water, power or even supplies of milk.

Nearly half a million power utility customers remained without electricity as of last week, according to the power authority.

Problems remain in some rural towns

In December, representatives of the island's Emergency Management Agency and FEMA consulted mayors across the island to determine the need of food and water to their communities, according to FEMA.

The agency said nine regional staging areas established to distribute food and water to the island's 78 mayors will remain open.

Domingo Marqués, a clinical psychologist who lives in San Juan, said many outlying towns still have serious problems with food and water.

"For some municipalities, it is wise to stop," Marqués said of food distribution efforts.

"Some have all roads open, and most of their barrios have power. The mountains are still without power, potable water, and some areas have lost the main roads. This means that some residents have to drive ... 30 to 40 minutes to get to a store when it usually takes five to 10 minutes. The elderly have it worse since they depend on others for transportation."