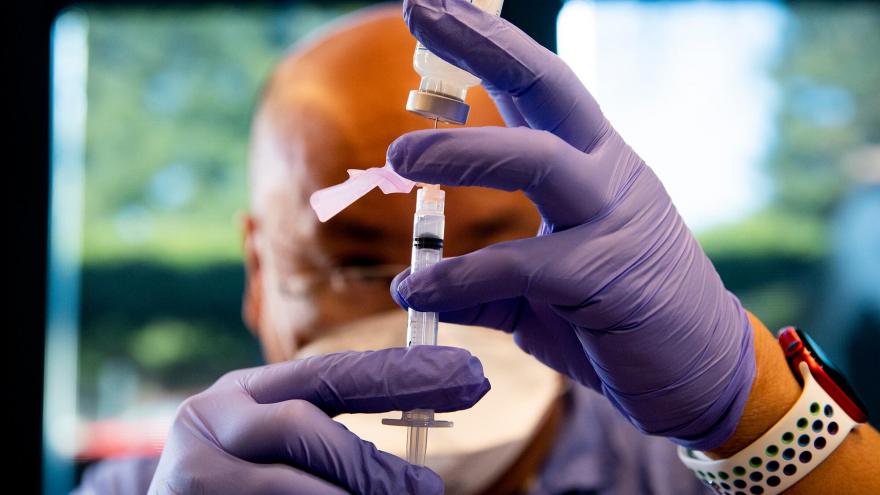 FEMA is finalizing a request for up to 10,000 service members to support Covid-19 vaccinations. This image shows a health care worker preparing a dose of the Moderna Covid-19 vaccine in Berkeley, California on January 14, 2021.

(CNN) -- The Pentagon has received a request from the Federal Emergency Management Agency to assist with President Joe Biden's plan to boost Covid-19 vaccinations across the country in his first 100 days in office, the Defense Department announced Thursday.

"The department is evaluating the request, and what kinds of support it can provide. Given the significance of the request, it will be reviewed urgently but carefully to determine what DOD assets can safely be made available to support the effort," Pentagon spokesperson John Kirby said in a statement.

"As Secretary (Lloyd) Austin has said, DOD is committed to do as much as it possibly can to assist the whole-of-government effort against Covid-19," he added.

Both the Defense Department and the Department of Homeland Security, which FEMA is within, are in intensive discussions on how the military can help the agency, including the possibility of sending up to 10,000 troops to vaccination mega-hubs.

The effort could also involve using both active duty and National Guard forces. Part of the discussion includes agreeing on what the most urgent tasks they can handle are, two defense officials told CNN.

CNN reported on Wednesday that service members could be deployed to up to 100 sites nationwide in support of administering the shots, according to a FEMA spokesperson.

The news comes after CNN reported earlier this week that the Defense Department was weighing options to assist with Biden's plan to vaccinate as many as 1.5 million people per day within months.

As of Tuesday, FEMA had obligated more than $1.2 billion to states, territories and tribes for expenses related to Covid-19 vaccination at 100% federal cost share, the agency announced Wednesday in a news release.

That number is expected to grow in the days ahead, according to the release. FEMA will reimburse local governments for use of their National Guard to respond to Covid-19 and other assistance, in accordance with Biden's memorandum last Thursday.

Biden has upped the ante on his already ambitious vaccine expectations. When he said Monday that he expects the US will soon be able to vaccinate 1.5 million people a day -- raising the bar by roughly 500,000 more vaccinations than the target of 1 million per day in his first 100 days in office -- he said the US could surpass that initial target in about three weeks.

But the administration has been open about the reality that the federal vaccine effort faces several hurdles. Speaking to CNN's Erin Burnett, Biden's chief of staff, Ron Klain, noted on Tuesday that while procuring additional vaccines is important, the issues extend beyond that, such as making sure there are enough vaccination centers and people to administer the inoculations.