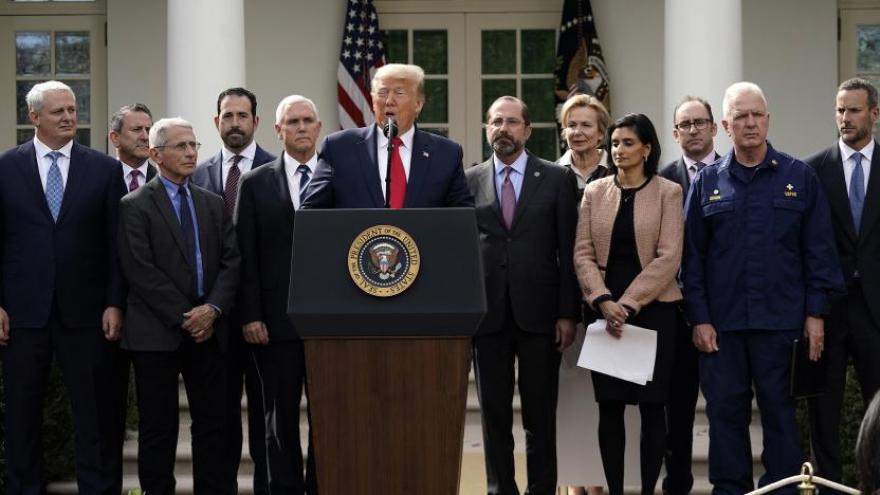 As governors assess their states' needs and top health care officials warn of supply shortages, the Federal Emergency Management Agency is mapping out its role and preparing what assistance it can provide to states and communities. President Donald Trump holds a news conference about the ongoing global coronavirus pandemic in the Rose garden at the White House March 13, 2020 in Washington, DC.

(CNN) -- As governors assess their states' needs and top health care officials warn of supply shortages, the Federal Emergency Management Agency is mapping out its role and preparing what assistance it can provide to states and communities.

Now that President Donald Trump has declared a national emergency and invoked a special statutory authority, governors can tap into FEMA's resources -- including supplies, which are in high demand and short supply -- and be reimbursed by the federal government for certain emergency activities.

"FEMA is fully engaged at the highest levels. Today, FEMA is activated in every region," Trump said Wednesday at the White House. "This is a very different kind of work for FEMA, but they will come through as they always do."

On Tuesday, New York Gov. Andrew Cuomo also touted FEMA in an interview with CNN: "We need FEMA. FEMA has tremendous resources ... I know what they can do."

FEMA, which is typically associated with natural disasters, is uniquely positioned to provide assistance as the federal agency called in for disaster relief. The agency is equipped to, among other things, provide necessary resources, deploy personnel and coordinate between agencies — all in a short turnover period. In the days ahead, FEMA will deploy personnel across the country and assist the Health and Human Services Department in setting up coronavirus testing centers.

But this pandemic, which officially reached all 50 states Tuesday when West Virginia reported its first case, is unlike the natural disasters that FEMA is accustomed to. What is required in the moment may not be immediately obvious. FEMA, however, can pull from the agency's extended experience in infrastructure and logistics support to assist the administration's coronavirus response.

For example, FEMA is assisting the Health and Human Services Department with "planning, coordination, logistics, and outreach with supporting states to identify sites and operational requirements" for coronavirus testing sites, according to a FEMA spokesperson.

FEMA also has the infrastructure and know-how to quickly order supplies in bulk — a necessity for states with a large number of coronavirus cases.

Washington state, for example, has put in requests to HHS for supplies, including face masks, surgical gowns and gloves. Last week, the state received more than 700,000 items from the federal government. Washington has another order pending and a request has been made to expedite the shipment, said Mike Faulk, a spokesman for Washington Gov. Jay Inslee's office.

While FEMA doesn't stock medical supplies, according to a FEMA spokesperson, the agency can help procure them. HHS, the spokesperson said, is the "central point for planning and assessing needs for personal protective equipment and sourcing large scale requirements according to national assessments of need."

While the situation remains in flux, FEMA is also mobilizing on the ground, placing the agency on the frontlines and requiring it to contend with the highly contagious nature of the virus.

Internally, the agency is in frequent, ongoing discussions about assessing risk to deployed FEMA personnel and ensuring they have the proper equipment, said Steve Reaves, president of the union that represents FEMA workers.

"The exposure level to deployed personnel is higher risk," Reaves said, noting that personnel could be sent to hotspots. "It's a moving target."

To that end, the agency has made exceptions for personnel who might fall under the high-risk category or fear putting family members at risk of exposure. "You're given the ability to say, 'I have somebody at home and I can't be exposed to this because it could put them at higher risk of mortality,'" Reaves said.

People could always opt out of a deployment if there were a valid reason, but the latest exceptions indicate the severity of exposure.

In addition to making sure there's enough protective equipment on hand to shield personnel from exposure, the agency is also considering what other precautions need to be taken in their regular response activities.

For example, FEMA will often set up joint field offices to respond to a disaster where affected individuals can pick up supplies, like water or cots. Typically, personnel might be seen cramped in small, confined spaces at these locations. That can't be the case in this environment, Reaves said.

There are discussions about enforcing social distancing by keeping personnel six feet apart, as recommended by the Centers for Disease Control and Prevention, and controlling any lines or crowds so that people aren't too close to one another.

"The health and safety of its employees and the American population as a whole is a top priority for FEMA," the FEMA spokesperson said. "We have supplies dedicated to FEMA personnel should they need them and we will continue to follow the recommendations of the CDC and other federal authorities to ensure FEMA's workforce is safe while we continue to perform mission-essential functions."

FEMA has confronted health crises before, but during some of those -- including Zika, H1N1 and SARS -- FEMA maintained a supporting role to HHS and declarations were never issued, according to Michael Coen, a senior adviser for emergency management at IEM and former FEMA chief of staff during the Obama administration.

"None of those became as big of an outbreak as we're seeing with COVID-19. But those were examples of FEMA being in support of HHS in some way, but without the use of a Stafford emergency declaration or major disaster declaration," he said.

With a declaration in play now, FEMA, like much of the United States, will likely be assessing what it can do to stem an outbreak that's paralyzed the world.

This story has been updated with a comment from the President.